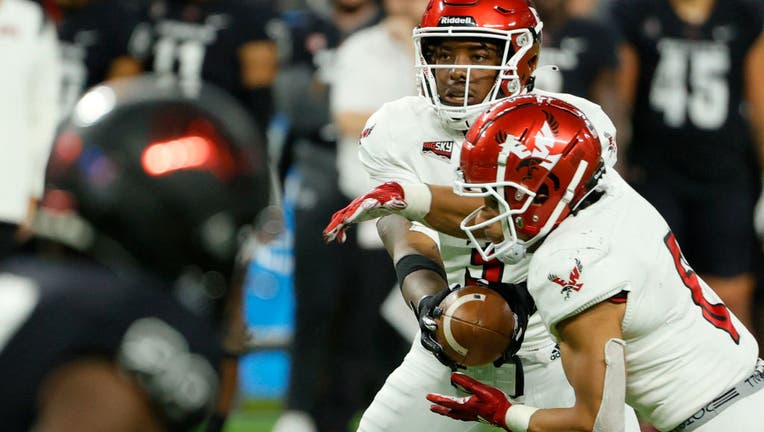 LAS VEGAS, NEVADA - SEPTEMBER 02: Quarterback Eric Barriere #3 of the Eastern Washington Eagles hands the ball off to running back Dennis Merritt #6 during their game against the UNLV Rebels at Allegiant Stadium on September 2, 2021 in Las Vegas, Nev

GAINESVILLE, Fla. - This Saturday's Eastern Washington University football game at the University of Florida has been rescheduled to Sunday due to Hurricane Ian.

The Gators and Eagles will kick off in Gainesville at 9 a.m. P.T. shortly before NFL games around the country. UF also announced this week that classes all academic and student-related activities, including online classes, are canceled Wednesday through Friday.

Playing the game guarantees Eastern Washington a $750,000 payday, a significant revenue source for a school with an athletic budget around $17.5 million.

Hurricane-force winds (74-plus mph) are expected to arrive along Florida's Gulf Coast within the Hurricane Warning areas on Wednesday morning, with tropical-storm-force winds possibly beginning by late Tuesday.

Tickets for Saturday's game will be honored for Sunday.

EWU said most game day activities, including tailgating, will also remain the same for Sunday.