Like most of his teammates, Keyontae Johnson tested positive for COVID-19 during the summer. Although the cause of Johnson's ailment was not immediately known, the coronavirus can lead to myocarditis, a viral infection of the heart muscle.

LAKE MARY, Fla. - Florida forward Keyontae Johnson remained in critical but stable condition at a hospital, the team reported Sunday, one day after he collapsed on the court during a game at Florida State.

The scary scene took place early in the first half of the game between the in-state rivals. Johnson, the SEC Preseason Player of the Year, appeared to collapse on the court.

Johnson started off the game hot. He was 2-of-3 from the floor with five points before the incident occurred.  Johnson had just dunked in transition before he fell to the floor as the team broke its huddle. Several Gators were in tears and a couple buried their faces in towels as coach Mike White gathered his team to say a prayer.  The game continued a few minutes later.

Florida sent one of its jets to Norfolk, Virginia, to get Johnson’s parents Saturday and take them to Tallahassee to be with their son. Gators coach Mike White, who let his players decide whether to continue playing, also stayed overnight there along with head athletic trainer Dave Werner.

The team released an update on Sunday morning, stating that "Keyontae received terrific care on site by the FSU staff and at Tallahassee Memorial, which has worked in consultation with UF Health."

They added that "we're glad his parents can be by his side, and they all feel the support of Gator Nation."

No details have been released about what might have caused Johnson to crumple to the floor as teams came out of a timeout early in the game.

However, like most of his teammates, Johnson tested positive for COVID-19 during the summer. Although the cause of Johnson's ailment was not immediately known, the coronavirus can lead to myocarditis, a viral infection of the heart muscle. At its most severe, myocarditis can lead to sudden cardiac arrest and has been a documented cause of death for young, otherwise healthy athletes.

Johnson is one of the best players on the Florida team. The junior forward was averaging 19.7 points, 6 rebounds and 1.7 assists coming into the game against Florida State. He was shooting about 64% from the field. 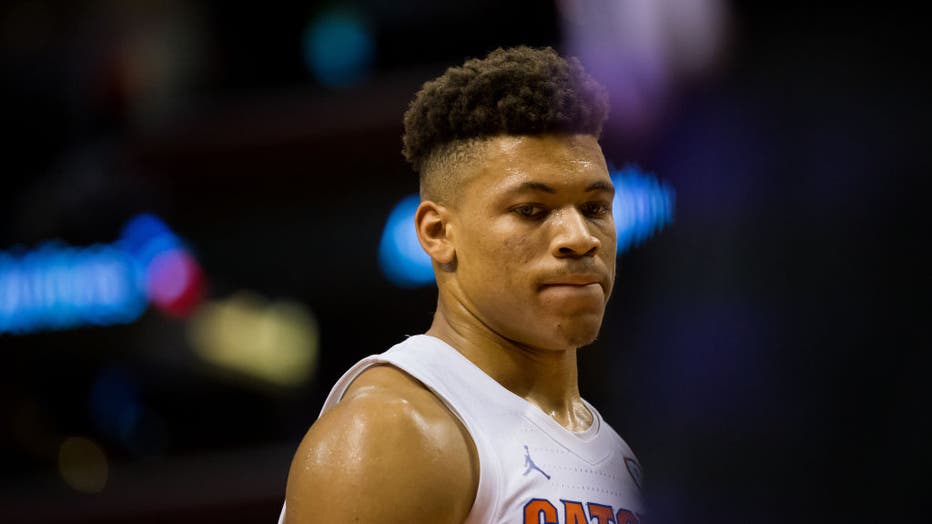 Florida was 3-0 coming into the game, having beat Army, Boston College and Stetson already this season. The team was 19-12 with an 11-7 conference record before the season shut down because of the coronavirus pandemic.

Florida was ahead 11-3 after Johnson's dunk. The 20th-ranked Seminoles (2-0) scored the next seven points. Florida State pulled away from there and led 45-35 at halftime, outscoring the Gators 42-24 after Johnson's collapse.

Tune in to FOX 35 Orlando for the latest coronavirus news