There are not too many players on Team USA Hockey that come from right here in Central Florida.  But on her way to representing her country, Orlando's own Peyton Compton got her start at the RDV Sportsplex after going with friends to a birthday party.

ORLANDO, Fla. - There are not too many players on Team USA Hockey that come from right here in Central Florida.  But on her way to representing her country, Orlando's own Peyton Compton got her start at the RDV Sportsplex after going with friends to a birthday party.

"It was an open skate. And I tried it, and they wore all their equipment and everything when they went, and I just thought it was awesome," said Peyton Compton. "I just thought hmm, maybe I should try it. I was holding on to the rails, trying not to fall on my face the whole time. But, I've always had this competitiveness to me to just keep wanting to get better. And I just fell in love with it."

That love for the game combined with incredible athletic ability meant that Peyton advanced to a super high level, and at an extraordinary pace.

"In seven short years of skating, you know she's gone from playing house league games to Team USA," said Peyton's father Rich Compton. "So it's just remarkable her acceleration through the sport and the level that she's playing at for sure." 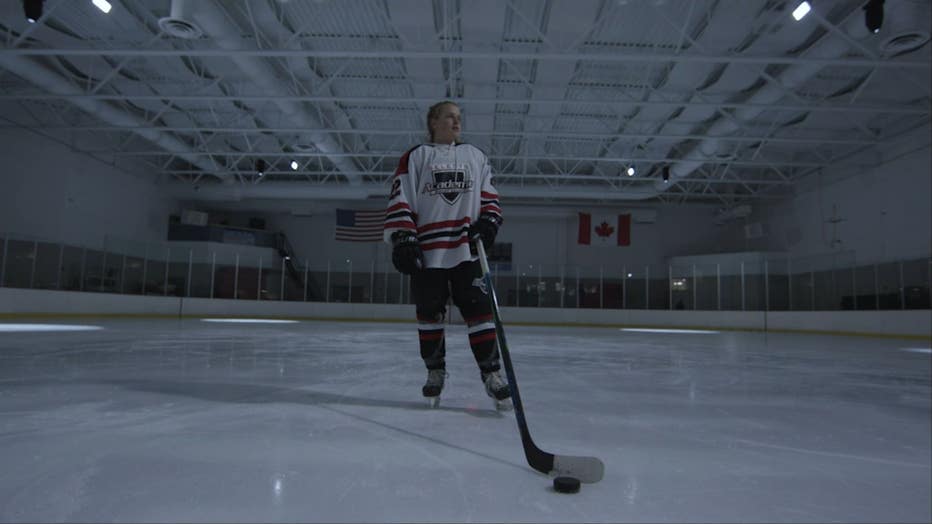 It's amazing to think that this might not have ever happened if not for Peyton's mom.  Amy Compton encouraged an 8-year-old Peyton to go for her hockey dreams, getting Peyton a full set of gear for Christmas, and signing her up to play, just weeks before passing away from cancer.  And in some ways, Peyton plays in her mom's memory.

"She was always so enthusiastic. She was always smiling, very happy, very nurturing," said Peyton. "And I feel like she really shaped me into being the person I am today. When I made the U-18 Calgary team for the USA stuff, I was just thinking back about how it was so important that she got me here. And if it wasn't for the thought of her helping me and always wanting me to be the best at what I can do, I feel like that definitely helped me mentally and physically to try and just give my all."

And giving her all has led to some impressive goals being realized.  Peyton will play college hockey next year.  And she continues to represent Team USA in competitions. It's an honor she's already gotten to experience.

"When we stepped up on the ice, and they were doing the National Anthem, it was just the feeling was like 'holy cow I made it here.' I finally am able to say that I wore a USA jersey. And that feeling, I just feel so honored that I was able to be selected to help our country win," said Peyton.

"You know, there's a lot of mixed emotions. And especially not having her mom here. You know sometimes I feel very selfish that I get to enjoy all of this and the journey that she has gone on and taken me with, and her mom's not with us," said Rich.

Peyton's journey will only keep going onwards and upwards. She's focused on playing college hockey next year.  But the Olympics are definitely in her sights in the not-too-distant future. And Compton will represent Team USA again in the upcoming World Junior Championship in Sweden in January.