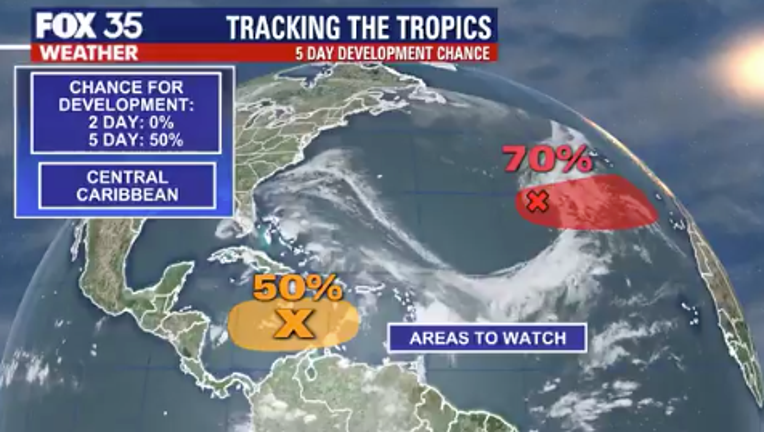 FOX 35 meteorologist Jayme King said on Monday that there are two areas to watch in the tropics, as they have a chance of developing over the next five days.

The first area is located several hundred miles southwest of the Azores. Showers and thunderstorms associated with a non-tropical low-pressure system is forecasted to gradually become better organized.

The National Hurricane Center (NHC) expects it to become a tropical or subtropical storm over the next few days while the system moves eastward in the Atlantic Ocean. It has a 70 percent chance of formation over the next five days.

RELATED: Where will Eta make landfall? Models show some uncertainty

There is another area to watch over the central Caribbean Sea. An area of low pressure could form in a couple of days, as the NHC says that environmental conditions are conducive for development. A tropical depression could form late this week or over the weekend. It has a 50 percent chance of formation over the next five days.

Meteorologist Jayme King says that if we have another named system this year, the 2020 hurricane season will go down as the most active every record.

The next two names for storms this year are 'Theta' and 'Iota.'

Tune in to FOX 35 Orlando for the latest weather alerts.