KISSIMMEE, Fla. - A state investigation is underway after the Slingshot attraction at Old Town malfunctioned Thursday night, stranding two teenagers 30-40 feet in the air for hours.

A spokesperson for the Florida Department of Agriculture and Consumer Services said its Bureau of Fair Rides Inspection had an inspector on-site Friday.

The ride is owned and operated by Old Town Slingshot, LLC.and is not affiliated with Old Town USA. Director of Sales and Marketing, John Stine, said there was a breach of one of the cables while the ride was in operation, leaving two teenage girls suspended in the air for a few hours. "[the cable breach] caused the ride to shut down. Unfortunately the guests were suspended, but the guests were safe at all times." Stine said a redundant safety cable remained intact, keeping the ride vehicle from falling.

Crews with Kissimmee Fire Rescue and Osceola County Fire Rescue pulled the girls off of the ride shortly before midnight on Thursday.

The pair had been stuck on the ride for nearly two hours when firefighters used a bucket truck to deliver them to safety after they were suspended approximately 35 feet above the ground.

"Osceola Tower 72 and City of Kissimmee Fire Department Tower 11 worked together tonight to perform a successful high angle rescue of two teens who became stuck, suspended 30-40' in the air on a malfunctioning ride at Old Town, along West U.S. 192 in Kissimmee," Osceola County Fire Rescue posted on its Facebook page. 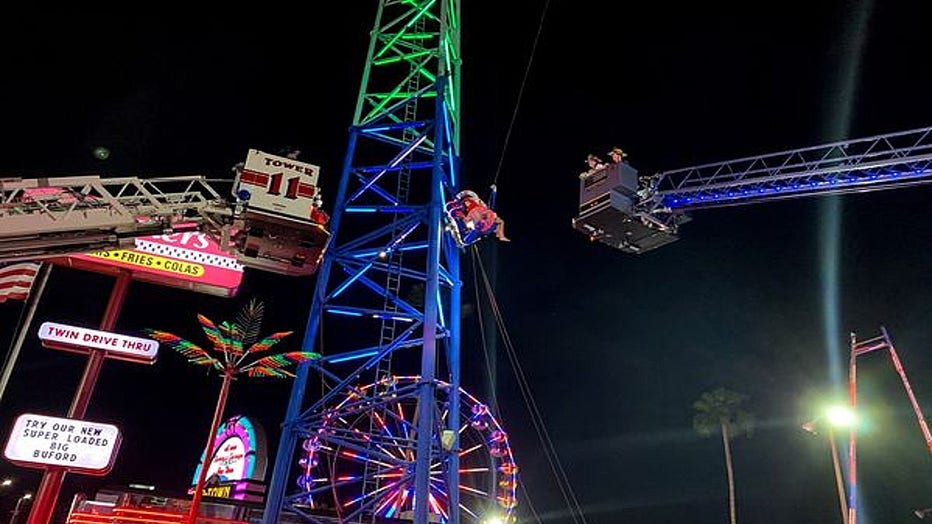 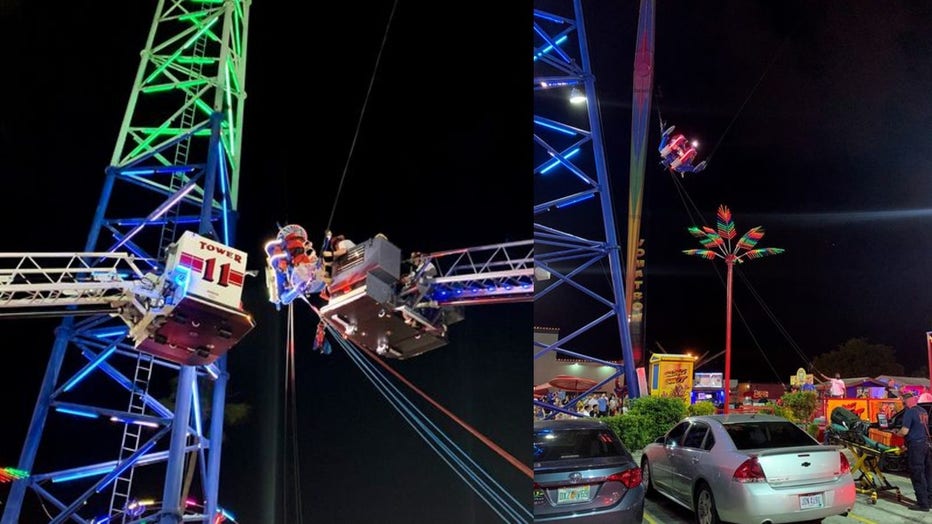 Witness Brian Hall said he was having dinner in the area with his family when he saw the girls were stuck.

MORE NEWS: Kids found clinging to paddleboard over a mile off Florida coast

"We’re eating and out of nowhere we hear a cable snap and we see them drop about halfway down," he said. 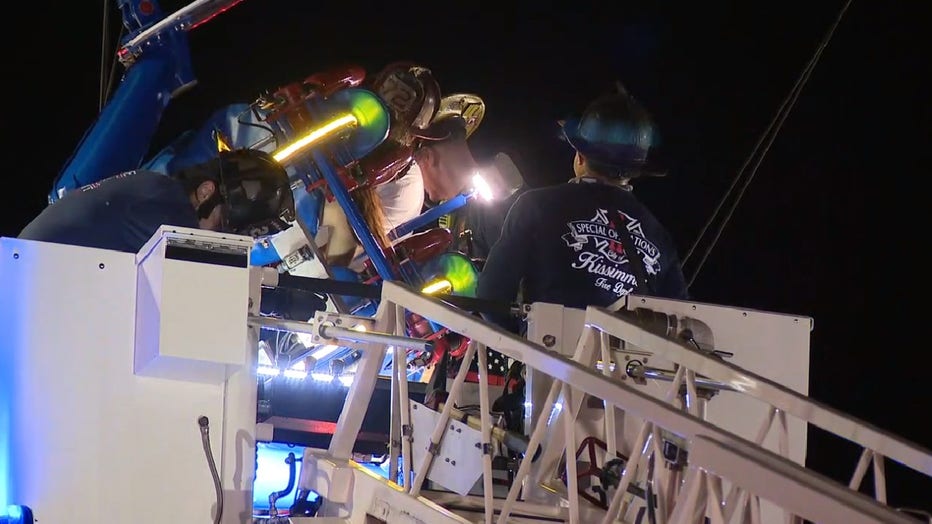 Hall said the girls had been stuck for about 30-45 minutes at that point and he decided to call 911. "I’m talking to my girlfriend telling her, like why isn’t anyone calling the cops. The people working there they’re trying to handle it on their own. The people around are talking about it, but no one is trying to do something about it, so I decided to call the fire department."

Stine said the ride has been in operation since 2001 and a situation like this has never happened. He said ride operators do daily inspections before every shift and nothing out of the ordinary was found during Thursday's inspection.

"They do a complete inspection of the structure, the cables, everything. We do not open a ride until it is fully inspected and it was good to go."

Stine said the state also inspects the ride at least twice a year. A spokesperson for the Office of Agriculture said the latest state inspection was on March 19, 2021 and no issues were identified at the time.

FOX 35 viewer Sydnie Wilson was in the vicinity when she was able to capture these images of firefighters working to secure the ride.

Crews with Kissimmee Fire Rescue pulled two riders who appeared to be stuck on a slingshot attraction to safety. Video is courtesy of Sydnie Wilson.

Crews with Kissimmee Fire Rescue pulled two riders who appeared to be stuck on a slingshot attraction to safety. Drone video is courtesy of Dan Suslavich.