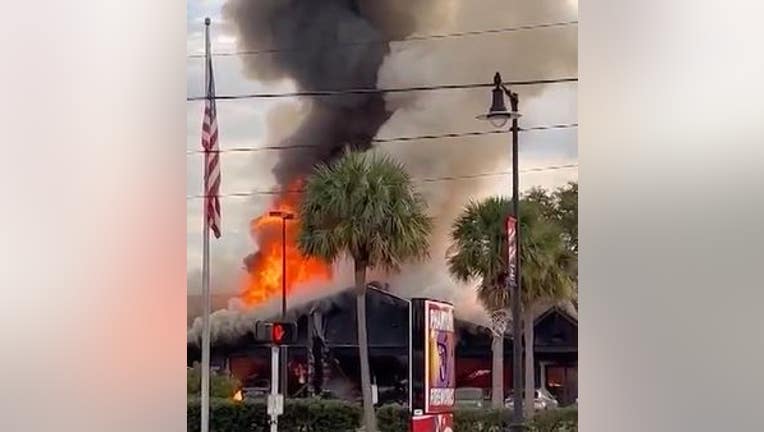 A fire was ignited after a vehicle crashed into a Phantom Fireworks in West Melbourne, Florida, authorities said.

BREVARD COUNTY, Fla. - A second person crashed into Phantom Fireworks early Thursday morning, nearly two weeks after a 53-year-old man died after he rear-ended a vehicle and drove through the front window of the building igniting a huge fire.

Around 2:17 a.m., West Melbourne Police said they received a call about a car crashing into the fireworks building. The car was traveling southbound on John Rodes Blvd when the driver went through the light at the intersection, struck a curb, and then went through the chain link fence/barrier around the Phantom Fireworks, police said.

The driver continued to travel into the building until it turned over on its side before coming to a rest.

One man was removed from the car and taken to a local hospital with minor injuries, police said.

On Nov. 28, a huge fire erupted after 53-year-old John Marcano, of West Melbourne, crashed through the window of Phantom Fireworks after he reportedly rear-ended a pickup truck with his SUV and pushed through the intersection near the store.

A large fire has sparked at Phantom Fireworks in West Melbourne, Florida, sending a column of smoke – and the occasional firework – into the air. Video showed several fire departments and ladder trucks pouring water onto the fireworks business.

Florida Highway Patrol confirmed that a 53-year-old man died after he rear-ended a vehicle and drove through the front window of Phantom Fireworks in West Melbourne, Florida, which started a fire that quickly engulfed the business.

Marcano was pronounced dead at the scene, while the driver of the pickup truck was not injured.

Phantom Fireworks told FOX 35 News that their showroom was completely destroyed, and they are unsure if a new store will be built in the same spot or at a different location.

Police have not yet determined why the second driver from Thursday lost control. It's also unknown if the crash caused additional damage to the building.