Students at Bethune-Cookman University tell FOX 35 News that they're tired of living in moldy, unsafe conditions.They want the school to do something about it.

DAYTONA BEACH, Fla. - Students at Bethune-Cookman University have taken to the streets in protest. The students came out in support of former head football coach candidate Ed Reed.

Just 25 days after announcing to bring Reed on as coach, the university in Daytona Beach, Florida decided to cut ties with the NFL Hall of Famer. The move comes after Reed was critical of the school’s facilities.

On Monday, protesters gathered in front of White Hall chanted things like "Reed was right" and called on the board of trustees to step down. Students shared images with FOX 35 News of what they said was mold growing on residence hall walls, ceilings, and even on their clothes.

"I got sick from mold," said one student. "I told my mom, my room is not in good condition. They moved me out, but it took them a little while, and we shouldn’t even be living conditions where there’s mold around us."

Students said these conditions got worse after hurricanes Ian and Nicole ripped through the area. Although, they said the mold in dorms has been around for years.

"I thought it was ridiculous. I thought it would change because my first year was during COVID. I understood there was COVID, but now it’s two years after COVID," said Wildcats quarterback Tyrone Franklin Jr.

Reed took to social media in a passionate speech to his players and recruits. He said he did not withdraw his name from the coaching search but rather the school forced him out for telling the truth.

"Where does that money go, because it’s not being put back into us and that’s how we feel. We want to express those feelings," said Franklin.

At the protest was the great-grandson of school founder Mary McLeod Bethune. Charles Bethune said he forgave Reed for his remarks and believes if his great-grandmother was still around, she would have taken him in. 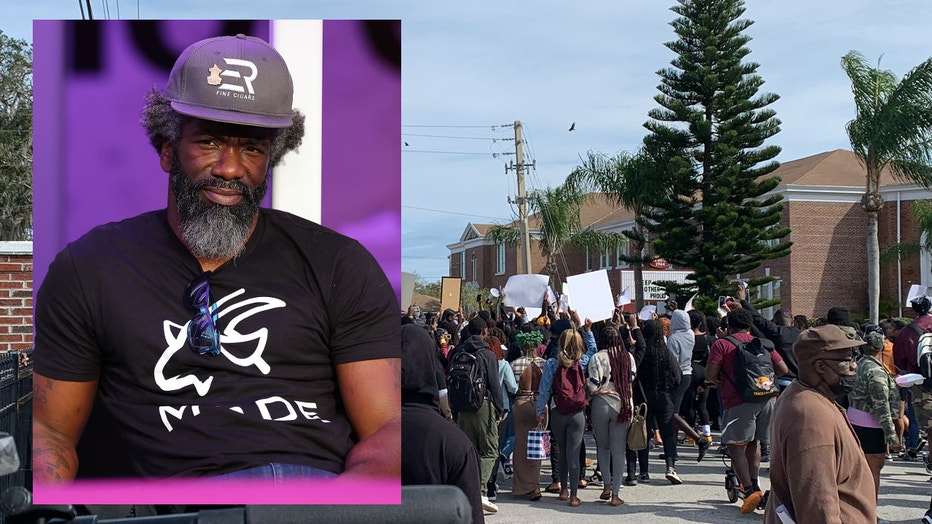 "Made sure that he understands Bethune-Cookman University, and what she feels needs to move forward," said Bethune. "I think she would’ve worked with him instead of just close the door."

Students have been using hashtags "#BringBackCoachReed" and "#CoachReedWasRight" to show their support for him.  A source close to Reed tells FOX 35 News he had a meeting scheduled to speak with university officials on Monday, but no other details were released.

FOX 35 News reached out to Bethune-Cookman for comment.  Read the full statement from Bethune-Cookman Interim President Lawrence Drake II regarding student concerns over housing and the recent departure of Ed Reed below:

"First, let me begin by saying that I was very proud of the manner in which our students handled themselves during yesterday’s student gathering. It was orderly and represented the best intentions of students sharing their voices. While social media and media outlets have seized on not continuing negotiations with NFL Hall of Fame player Ed Reed, many of our students chose to use this moment to voice their concerns. This administration takes no issue with this. In the coming days, I will meet with student leaders to ensure that we address many of the students' concerns and answer their questions as honestly as possible.

"To close the chapter on Mr. Reed, he was a tremendous player. Still, as we continued to observe him, we felt that his behavior was not aligned with the traditions of our founder Dr. Mary McLeod Bethune, and the university. We have over 50+ inquiries concerning our Head coaching position and are very excited about our candidate pool. Many of them possess not only knowledge of the game and the ability to assist in raising funds for the program. Still, they are disciplined leaders who have demonstrated their steadfast commitment to our Christian values. They also have the leadership skills to mold successful young men who are also student-athletes.

"We’ve also added a football player representative to join the search committee, giving the football team a stake and a voice in choosing our next Head Football coach.

"We hope to announce our selection of a new Head Football Coach in the next week to ten days.

"Next, Issues and concerns: Over the last year, Bethune-Cookman University has begun a complete assessment of all its facilities for fitness, renovation, and teardown, as well as the construction of new facilities to enhance our campus. We’ve enlisted the assistance of CTG Construction, an Orlando-based firm with extensive HBCU campus experience, our facilities partner Sodexo, and several environmental and architectural engineering firms to continue the assessment of over 100 buildings.  Simultaneously, we have begun to prioritize necessity and cost, as financial resources are limited. For some buildings and facilities, in light of two unprecedented weather events, Hurricane Ian and Hurricane Nicole, and enrollment growth, we have begun renovation and construction immediately. As with any process, facility age, building conditions, time to remedy, weather impact, and expense are paramount. To ensure we are thorough, this phase will likely not be complete until late summer or just before the FY23-24 school year. Once school begins in the Fall, we will work around student movement and will likely require moving students around, which could be disruptive to their living and learning. Student logistics, campus housing, and instructional classroom spaces are keys to the university meeting its academic requirements.

"While I believe the truth and transparency are always the best courses, some "facts" are not always friendly"! However, we have to do what is right even when it’s not popular. Our Founder Dr. Bethune once remarked," The progress of the world will call for the best that all of us have to give."

"We will continue to move to be the best version of ourselves and truly appreciate the patience of our students and all concerned as we work to improve our community."