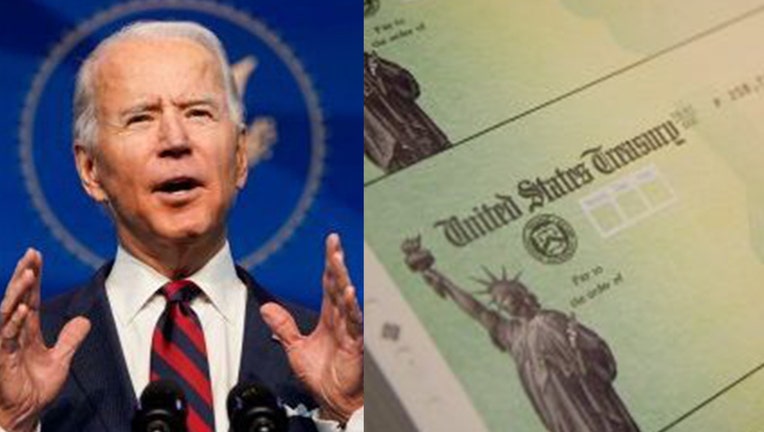 In a final campaign pitch to Georgia voters ahead of Tuesday's Senate runoffs, President-elect Joe Biden pledged that if Democrats win the pair of races, Congress would send a third stimulus check to Americans still reeling from the coronavirus pandemic.

The closely watched elections will determine whether Republicans retain control of the Senate — potentially limiting Biden's ability to pass his legislative agenda. If Jon Ossoff and Raphael Warnock win their respective races against incumbent Republican Sens. David Perdue and Kelly Loeffler, Democrats would secure a 50-50 split in the upper chamber, with Vice President-elect Kamala Harris then casting tie-breaking votes.

RELATED: Where is my stimulus check? IRS tool shows status of second payment

Although Loeffler and Perdue backed President Trump's last-minute push to increase the size of the direct cash payment included in the latest coronavirus relief package to $2,000 from $600, Senate Majority Leader Mitch McConnell, a Republican, rejected a bill for the bigger payments last week. The bigger payments have also been opposed by other Republicans.

Biden said that electing Osoff and Warnock would mean an end to "the gridlock that has gripped Washington and this nation" and would allow Congress to further his agenda on jobs, health care, justice and the environment, as well as COVID relief efforts.

"The debate over $2,000 isn't some abstract debate in Washington, it's about real lives. Your lives, the lives of good, hardworking Americans," the president-elect said. "If you're like millions of Americans all across this country, you need the money, you need the help, and you need it now."

Trump signed a mammoth $2.4 trillion package that included $900 billion in coronavirus relief last Sunday, securing another tranche of aid as a surge in COVID-19 infections threatens to further derail the nation's faltering economy.

The measure includes about $325 billion in small business relief, including $284 billion in forgivable loans for small businesses through the Paycheck Protection Program; an extension of boosted federal unemployment benefits at $300 a week through March 14, 2021, and a second $600 stimulus check.

But some Americans aren't eligible to receive the cash payment: College students and dependents over the age of 17 won't receive the money, nor will immigrants who don't have a Social Security number. Some higher-earners who received a check during the first round of stimulus payments will also not qualify for the second round.

American adults who earned less than $75,000 in 2019 will receive the full $600 check, while couples who earned less than $150,000 will receive $1,200. The payments will be tapered for higher-earners (5% of the amount by which their adjusted gross incomes exceeded the initial threshold) and phased out completely for individuals who earn more than $87,000 and couples who earn more than $174,000.

The federal government, trying to meet a Jan. 15 deadline, began sending out checks to millions of Americans this week through direct deposit and in the mail as paper checks.

Watch FOX 35 News for the latest on the coronavirus.