Deputies and community members teamed up to buy a car for a mother of two in Ottawa, Kansas, on December 15, after learning she had been walking six miles to and from work every day. (Credit: Franklin County, KS - Sheriff's Office via Storyful)

OTTAWA, Kansas - Deputies and community members teamed up to buy a car for a mother of two in Ottawa, Kansas, on December 15, after learning she had been walking six miles to and from work every day.

Footage uploaded to Facebook by the Franklin County, Kansas, Sheriff’s Office shows the woman receiving her car. "Oh my God, I love it!" she cries after getting into her new van.

"Over the last two weeks the Franklin County Sheriff’s Office has received several calls for service regarding a woman walking on 59 Highway between Ottawa and Princeton at around 7.00 am," wrote the Sheriff’s Office on Facebook.

"Each time Deputies responded they encountered a 24-year-old Princeton woman walking and would give her a ride to work so she would not have to walk on the cold highway." 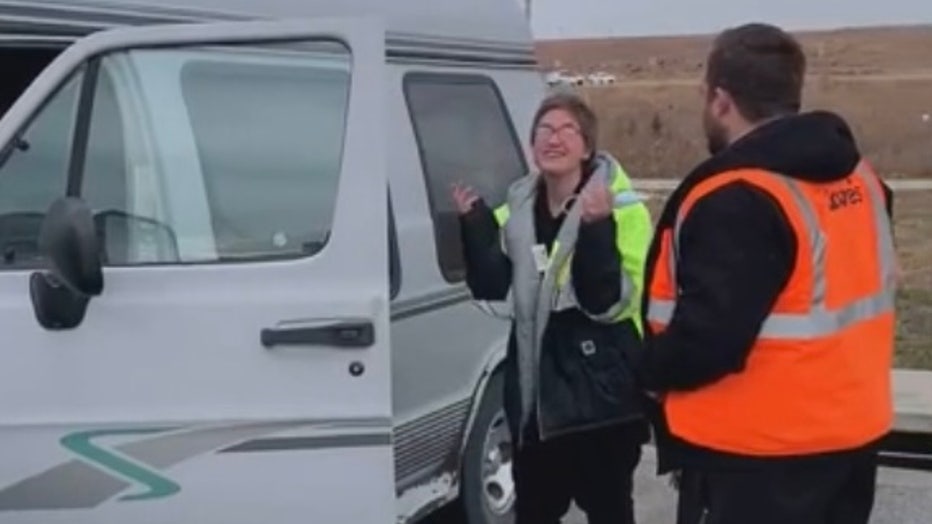 "Throughout these contacts with her, the Sheriff’s Office learned this woman walked to work at Love’s Truck Stop six miles (and then six miles back home) to support her two small children. The woman made several comments about how she had to walk so she could feed her children and was very driven and motivated to take care of her family any way she could."

"On December 9, 2020, after giving the woman a ride to work, a small group of Deputies gathered to discuss how we could help this woman. After only a few days, through generous citizens and businesses and the use of our ‘No Shave November’ funds we were able to donate a van, two new car seats, a Price Chopper gift card, the registration for the van and the first year of car insurance along with $200."

"On December 15, 2020, the Franklin County Sheriff’s Office, along with members of the community in partnership with Love’s Truck Stop, were able to surprise this woman with all of these items in hopes for making a better Christmas for her and her small children."