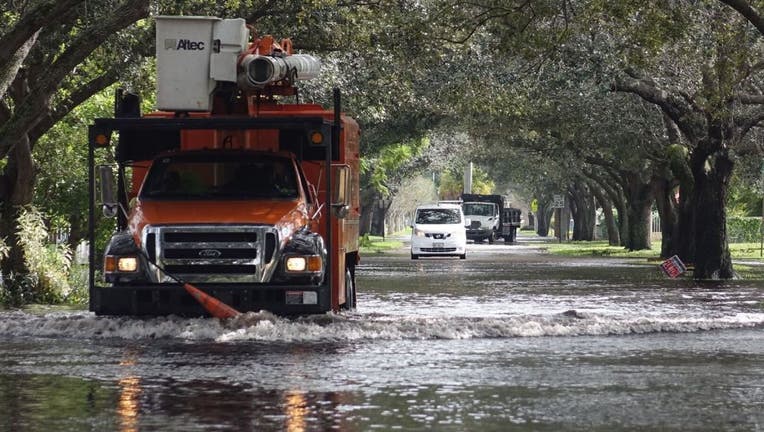 TALLAHASSEE, Fla. - Pointing to the “erratic nature” of the storm as it threatened a large part of Florida’s west coast, Gov. Ron DeSantis on Wednesday expanded a state of emergency and asked President Donald Trump for a federal emergency declaration as Tropical Storm Eta prepared to make landfall Thursday.

Tropical-storm and storm-surge warnings and a hurricane watch were in effect Wednesday for much of the state’s west coast, including the Tampa metropolitan area. The National Hurricane Center said in a 1 p.m. advisory that the storm was expected to remain offshore Wednesday before making landfall Thursday and then crossing the state into the Atlantic.

In the request to Trump, DeSantis cited risks of flooding and potential complications in sheltering people because of COVID-19. The hurricane center advisory said tropical-storm and storm-surge warnings were in effect from Bonita Beach in Southwest Florida to the Suwannee River in northern Florida. A hurricane watch was in effect from Ana Maria Island to Yankeetown.

“These areas along the west coast of Florida are the most vulnerable areas to storm surge in the entire state and prone to long duration coastal flooding that could lead to evacuations of coastal populations,” DeSantis wrote in the 10-page request.

DeSantis also said that medical evacuations and special-needs operations “are complicated by the additional safety requirements required as a result of COVID-19.”

“Emergency protective measures required as a result of this event will require extraordinary efforts of state and local government,” DeSantis’ request said. “With thousands of our citizens fighting COVID-19, we anticipate the need for shelters to be greater than usual, which results in increased resource requirements. Even healthy populations sheltered in traditional congregate shelters will require PPE (personal protective equipment) and the implementation of mitigation measures against the spread of COVID-19 in such environments. Special needs shelters and isolation facilities will be used in greater numbers than for previous events due to the prevalence of COVID-19 in the state.”

DeSantis made the request when Eta was at hurricane strength, but the hurricane center said in the 1 p.m. advisory that the system had weakened to a tropical storm. It was about 115 miles southwest of Tampa, with maximum sustained winds of 70 mph.

The governor on Saturday declared a state of emergency for counties in the southern part of the state, after Eta last week hit Nicaragua as a hurricane. Eta deluged parts of South Florida and then has lingered in the Gulf of Mexico, with a series of changes in its forecast track.

With the forecast Wednesday for the storm to hit the west coast and cross the state, DeSantis expanded the executive order to include Alachua, Citrus, Dixie, Gilchrist, Hernando, Hillsborough, Levy, Manatee, Marion, Pasco, Pinellas, Sarasota and Sumter Counties. In the request to Trump, which could bring federal financial assistance to Florida, DeSantis said some counties also had declared local states of emergency.

“The erratic nature of this tropical event is complicating evacuation and sheltering efforts and there are other counties discussing such a declaration and planning for the implementation of emergency protective measures, including the use of non-congregate sheltering,” the request said. “While a staple of this hurricane season, the lead time required to (successfully) execute these operations is complex by the lack of a clear track and intensity forecasts from the National Hurricane Center.”

A “cone” of the projected path of the storm showed it making landfall about 7 a.m. Thursday north of Tampa and exiting Florida about 7 p.m. Thursday in the northeast corner of the state.