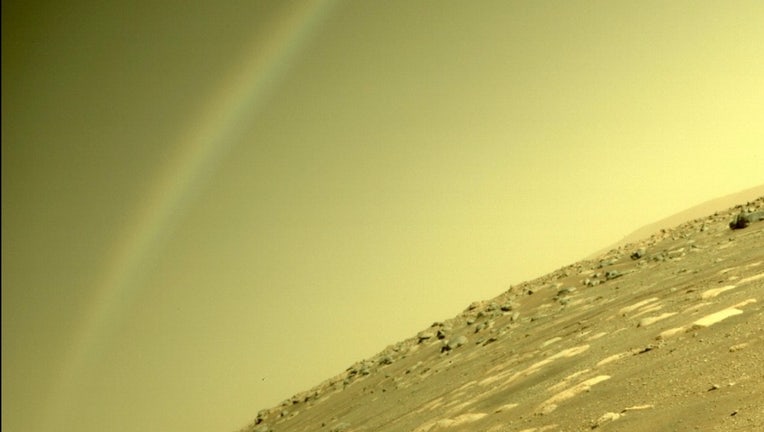 NASA has debunked speculation over an image from Mars that appeared to show what many believed to be a "rainbow" or "dustbow."

The photo was captured on April 4  from the rover's onboard Rear Left Hazard Avoidance Camera.

The NASA Perseverance Mars tweeted an explanation for the photo after the agency received comments online about whether the bright arc was in fact a rainbow we see here on Earth.

"Many have asked: Is that a rainbow on Mars?" they said. "No. Rainbows aren't possible here."

"Rainbows are created by light reflected off of round water droplets, but there isn't enough water here to condense, and it’s too cold for liquid water in the atmosphere,"  they continued. "This arc is a lens flare."

A lens flare is caused by a non-image-forming bright light that shines into the lens, FOX News reported.

Rainbows form when sunlight passes through raindrops in the atmosphere.

However, while a rainbow may not be possible on Mars' thin, dry and extremely cold atmosphere, The Hill noted Tuesday that in a 2015 "Ask Me Anything" a NASA team member hinted at the prospect of "icebows" because snow has been observed at the red planet's poles.

A recent image of the Mars Ingenuity helicopter – scheduled for its first test flight no sooner than April 11 – shows another lens flare.

As measurements were received, the rover's team determined that the surface temperature on the red planet was just below minus 4 degrees Fahrenheit when MEDA's system began recording on Feb. 19, a day after landing.

That temperature plummeted to minus 14 degrees Fahrenheit within a half-hour, according to a Tuesday release. You can read the full report HERE.