Famous Florida Highwaymen paintings up for sale at estate sale

The Florida Highwaymen were a group of 26 Black artists, mostly from the Fort Pierce area, who prevailed racial barriers in Florida in the 1950s to become successful landscape artists.

KISSIMMEE, Fla. - A rare artwork collection is up for sale in Central Florida this week.

Sixty Florida Highwaymen paintings are being sold at an estate sale in Kissimmee.

The Florida Highwaymen were a group of 26 Black artists, mostly from the Fort Pierce area, who prevailed racial barriers in Florida in the 1950s to become successful landscape artists. Two of the original artists, Harold Newton and Alfred Hair, received training from landscape artist Alfred "Beanie" Backus. The Highwaymen mostly worked as sharecroppers before becoming landscape artists.

"They are all self-taught," said Hansen Mulford, Chief Curator of the Orlando Museum of Art. "They had a little bit of instruction from when artists who lived in Fort Pierce when they lived there, but mostly they taught themselves and created their own style."

Mulford said they often sold their work out of the trunks of their cars on the sides of Florida roads. They also traveled along the highway, selling their paintings at doctor offices and dentist offices from Miami to Daytona Beach. It is estimated the original group sold up to 250,000 paintings over 20 years.

"I wanted at least one from all of the Highwaymen artists and I’ve achieved that goal," Kissimmee art collector Tom Smith told FOX 35. He owns about 60 Highwaymen paintings but is putting his personal collection up for sale because he is downsizing and moving into an assisted living facility.

He said he called in the Orlando Estate Sale Ladies to help him sell his expansive art collection, which includes pieces from around the world. 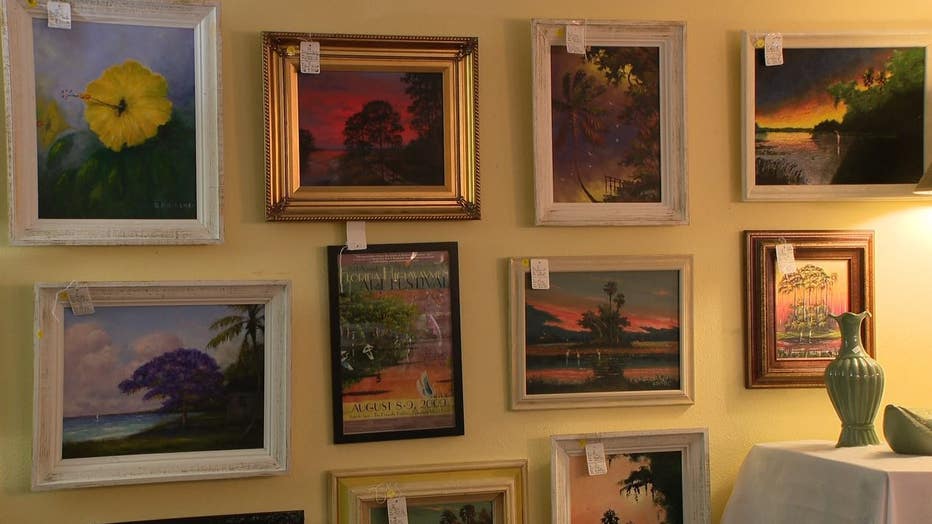 "A lot of people say I’m borderline hoarding, whereas I call it collecting," Smith said. Some of the Miami native's favorite pieces are his Highwaymen paintings, which he has been collecting for 15 years. He said the Florida connection, meeting the artists in person, and their stories drew him to the Highwaymen artwork. "[It’s like] the great American dream. Somebody broke away and was able to make it in the big time so to speak."

Smith said he also loves the vibrant colors used in the landscapes, which depict Florida sunsets, stating "you go out your backyard or go to the river or the beach and you’ll see this sunset. It’s not phony or fake. Willie Daniels is one of my most favorite of all artists. The colors he uses in there are just absolutely beautiful."

Marlies Bredel, owner of Orlando Estate Sale Ladies, said the prices for the paintings at the estate sale range from about $200 to around $2,000.

"We’ve had hundreds of calls. People anxious to come here and be able to possibly just purchase one of the collection that he has. We’re probably going to have to keep people waiting out in line," Bredel said. Mulford said the Highwaymen paintings have exploded in popularity over the last 20 years because people recognized the significance of the work.

"People recognize that this was a phenomenon that happened at a certain time in history and these were unusually talented and enterprising artists who created something that didn't exist before," Mulford added. "They all had a similar style, which was paint, very quickly… They would use a big brush to start with and lay out the big areas; the sky, water, the land. Then they would come back with a smaller brush, paint wet to wet so they’re adding paint to it to create the detail, [like] the trees."

Bredel said the estate sale will also include a large collection of Roseville, African Americana, and pieces from the 1920s.

The estate sale location is 2272 Paria Lane during the following days and times: