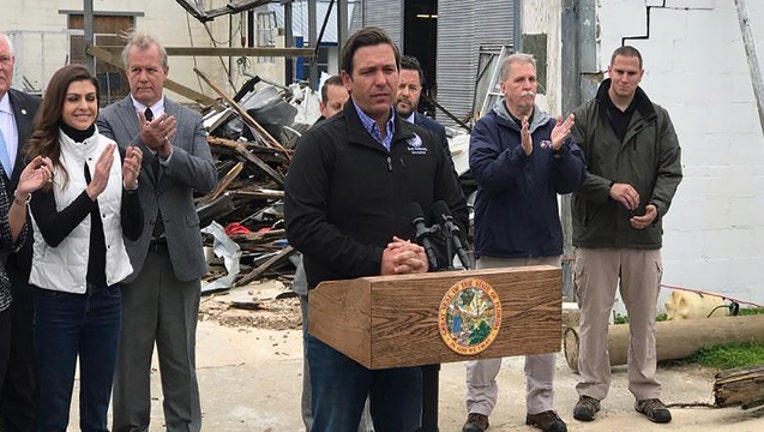 MARIANNA, Fla. (NSF) - Gov. Ron DeSantis announced Thursday the White House is extending the number of days debris cleanup from Hurricane Michael will be fully reimbursed by the federal government.

The move is expected to save Panhandle communities and the state “hundreds of millions of dollars,” according to Florida Division of Emergency Management Director Jared Moskowitz.

“This is a big deal,” Moskowitz said. “It’s a big deal for the people in the Panhandle. ... It’s hundreds of millions of dollars that is going to be relieved from our local governments’ and our state budgets.”

The eastern Panhandle had earlier been approved to pick five of its busiest days of debris cleanup from the Oct. 10 storm to receive 100 percent reimbursement. After DeSantis met with President Donald Trump on Tuesday, the full reimbursement period was extended to 45 days, DeSantis said while standing before the hurricane-mangled remains of the Jackson County Road Department facility.

The governor, who has close political ties to Trump, said he expects to continue making requests for the region, including a push to the White House to increase the remaining debris reimbursement --- currently expected to be 75 percent for local governments --- to 90 percent.

Adam Johnson, interim Calhoun County emergency management director, said his county is grateful for the support from DeSantis and Trump, which he said shows people in the region “are not forgotten about.”

DeSantis met last week in Panama City with Federal Emergency Management Agency Administrator Brock Long and local officials and said at the time he would push the White House to increase federal reimbursements for debris cleanup.

Thursday’s announcement came as Northwest Florida lawmakers continue to express concern the region will be forgotten now that the media spotlight has waned. That concern is rooted, at least in part, in the fact Michael didn’t hit any of the state’s most-populated metro areas or decimate a signature crop such as oranges.

Sen. Doug Broxson, R-Gulf Breeze, added that there is a “great fear” that priority could eventually go to other regions hit by Hurricane Matthew in 2016, Hurricane Irma in 2017 and any future storms.

“We’re right now stacked on Matthew, Irma and now we have Michael. God knows if we have a storm next year, we’ll be a distant thought,” Broxson said. “We know this storm is bigger than Florida can handle. As you look at our budgets, I don’t think I’ve seen any real progressive revelation that we’re going to be able to underwrite what the devastation is.”

Lawmakers said it’s too early to put a price tag on the storm, but the need for federal help is a must, as the anticipated costs will be too great for the state and local governments.

“We’re doing a lot on our own, but we have got to have a lot of money,” Sen. George Gainer, R-Panama City, said.

With 2.8 million acres of forest land damaged, timber farmers sustained more than $1.3 billion of the overall $1.49 billion in estimated agricultural damages that have been reported from the storm.

The region, which relies heavily on tourism and the military, is facing massive housing issues and anticipates reductions in government revenue once property values are reassessed.

As of Friday, Michael had resulted in 142,057 insurance claims, mostly from personal residential property, with projected insured losses at nearly $5.27 billion, according to the latest numbers posted by the state Office of Insurance Regulation.

Lawmakers say school districts in the region are having to discuss closing some campuses as the student population is down 20 percent because displaced families have left areas.

“It’s remarkable how much money that will be needed just to get us upright, to start walking,” Trumbull said.

The lawmakers’ comments followed Agriculture Commissioner Nikki Fried and Florida Forest Service Director Jim Karels on Tuesday warning of an increased threat of wildfires from the massive amounts of debris that continue to litter the counties.