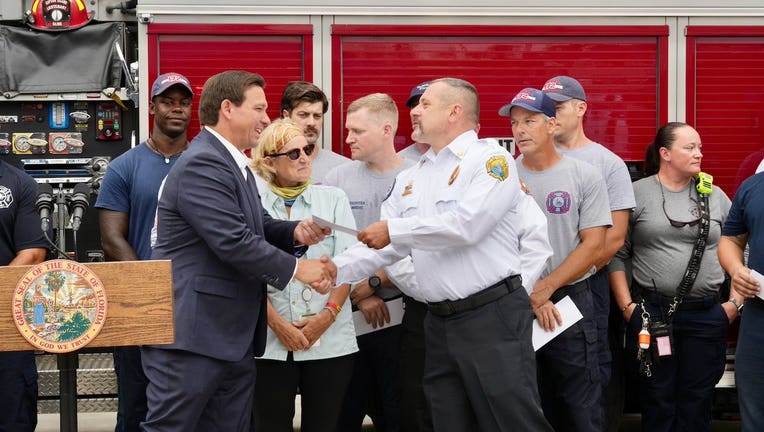 The checks are part of the state's "Freedom First Budget," which was signed by DeSantis on June 2 and includes a $1,000 bonus payment for local government first responders in the state, according to a press release.

The checks were intended to be mailed to first responders before Hurricane Ian made landfall in the state, but couldn't be delivered to areas that were impacted by the Category 4 storm.

DeSantis gave the checks to first responders during an event in Sanibel Island, Florida, on Tuesday.

In a press release, the Florida governor said that first responders in Southwest Florida are working "day and night" following the destruction Hurricane Ian brought on the area.

"We are proud of the hard work and selflessness that our first responders demonstrate every day, especially when communities are relying on them more than ever," DeSantis said. "For nearly three weeks, first responders in Southwest Florida have been working day and night in the wake of Hurricane Ian to save lives and help their communities. I am glad we were able to bring Sanibel Island, Captiva Island and Upper Captiva Island first responders their $1,000 bonuses to show our appreciation for their dedication."

Another 400 checks that are undeliverable through mail are also being sent to local governments "in an effort to provide first responders with these bonuses as quickly as possible," according to a press release.

Those eligible for the one-time bonus include "police officers, sheriff’s deputies, paramedics, emergency medical technicians (EMTs), and firefighters employed by local governments throughout the state."