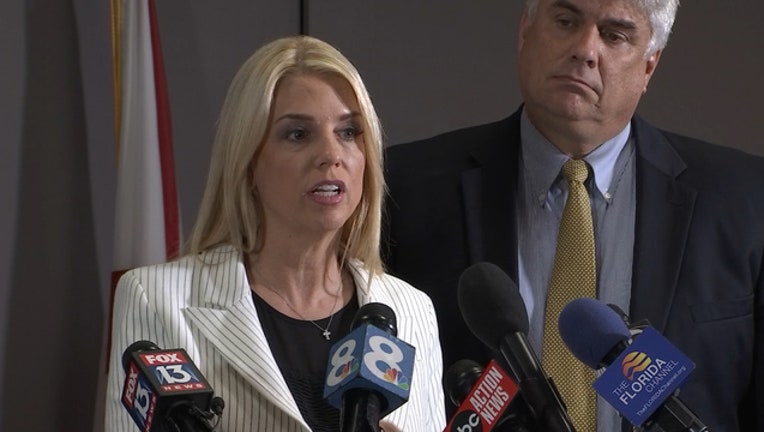 TALLAHASSEE, Fla. (NSF) - Florida Attorney General Pam Bondi has launched a statewide probe into sexual abuse by Catholic priests, following a Pennsylvania grand jury report this summer that found more than 1,000 children were molested over decades by hundreds of priests whose wrongdoing was covered up by church leaders.

Bondi, whose office is investigating all seven Catholic dioceses in Florida, said Thursday she launched a tip site “to allow victims and anyone with information about priest abuse to report what they know.”

“Any priest that would exploit a position of power and trust to abuse a child is a disgrace to the church and a threat to society,” she said during a Tampa press conference.

Victims or people with information about past abuse can contact Bondi’s office through a special hotline or submit information on the internet.

“If you call in, please know, we want to help you. We want to counsel you, and we want to get to the bottom of anything that could have happened in our state,” said Bondi, who has made combating human trafficking and protecting victims among her top priorities during eight years in office. “Please share your story with us. Even if you’ve previously reported it to the church, to anyone, report it to us now.”

Bondi said she ordered the Florida statewide inquiry after the August release of the Pennsylvania grand jury’s chilling report of decades of child sexual abuse by priests whose crimes were protected by church leaders.

“When the case about Pennsylvania aired, I couldn’t sleep that night. The next morning I talked to my statewide prosecutor and said, ‘We have to look into this,’ and he wholeheartedly agreed,” said Bondi, adding that she has five lawyers working on the investigation.

“The citizens of Pennsylvania played a major role in reporting this by providing investigators vital stories about past abuse and potential coverups. We have reason to believe there are similar stories in Florida. I know it’s painful for you as a survivor to discuss past abuses. But your story will help bring justice to prevent future abuse,” she said.

Bondi, who is leaving office in January due to term limits, said it is too early to know how many Floridians, former residents or visitors may have been molested.

“As far as how widespread this is, frankly we have no idea right now,” she said. “We love the Catholic religion, the Catholic church. We love youth organizations and we love schools. But abuse is abuse.”

The seven Catholic dioceses in Florida “have been in dialogue with the statewide prosecutor and are cooperating with the investigation,” Florida Conference of Catholic Bishops spokeswoman Michele Taylor said in an email.

“This has been a very painful period for all Catholics. I hope the outcome of this investigation and other acts of transparency by the dioceses in Florida will bring about greater trust in the Church. Our goals are similar --- to ensure the safety of all children and vulnerable adults and to prevent perpetrators of abuse from serving in active ministry,” Bishop Felipe Estévez, who heads the Diocese of St. Augustine, said.

Bishop Gregory Parkes of St. Petersburg said he welcomes the investigation “and want to assure the public that the Diocese of St. Petersburg has been and continues to be proactive in its efforts to keep children safe, which should be a priority for everyone.”

“We denounce all forms of sexual abuse by any person or any institution as a reprehensible crime and believe that perpetrators should be punished to the fullest extent of the law,” Parkes said in a statement.

Bondi said her office is issuing subpoenas and conducting interviews.

“We’re moving very fast, because, again, if this is going on in our state, we want to know and we want to know now,” Bondi said, while assuring victims that information will be kept confidential. “Getting the word out there is what it’s going to take.”

Bondi’s office said tips about past abuse can be reported at MyFloridaLegal.com/StopAbuse.