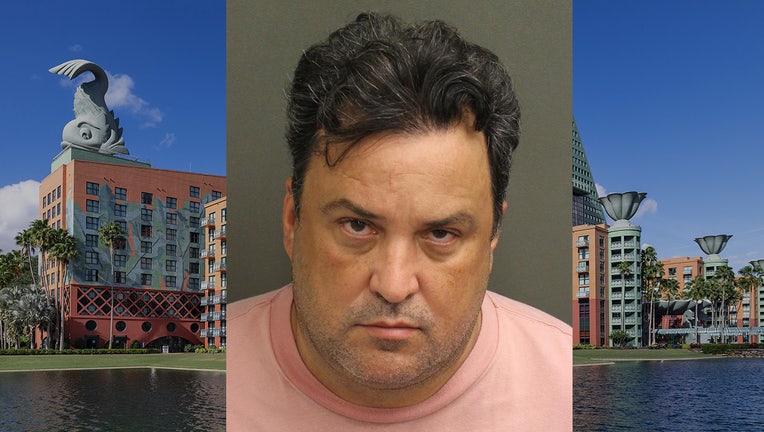 ORANGE COUNTY, Fla. - A man is behind bars after being arrested and accused of raping a woman at Disney's Dolphin Resort in Florida, according to the Orange County Sheriff's Office.

Eyvor Gomez, 49, of Pembroke Pines, was arrested Monday and faces a charge of sexual battery.

According to an arrest affidavit, the victim stated that she was at the bar at the Walt Disney World Dolphin Resort when Gomez struck up a conversation with her. At last call, the victim said that Gomez suggested they go outside to continue drinking out of the view of the cameras because he had his own alcohol on him.

While the two were in a corner by a glass wall and bushes, the victim told deputies that Gomez began to make advances toward her, which she rejected. She said Gomez then pushed her against the glass wall and she hit her head, blacking out.

The report states that security cameras captured the woman trying to crawl away from Gomez, who was then reportedly seen forcing himself on her. The victim was seen trying to push Gomez off, but could not, the report stated. Gomez is then allegedly seen taking a photo of the victim with a cellphone.

After the attack, the sheriff's office said that the woman and Gomez are seen going back to the lobby where the victim spotted a group of strangers and sat next to them, asking them to pretend they know her so that Gomez would leave her alone.

Gomez was identified by Disney security due to an incident that occurred prior in the night between him and his wife, the report stated.

"There was an argument and his wife was escorted back to their room. Eyvor matched the description and photograph provided by witnesses. Disney confirmed through surveillance video," the affidavit said.

Gomez initially denied knowing the victim, but later admitted to investigators that the two were just kissing and "groping," the report stated. He was arrested and booked into the Orange County Jail.