Florida politicians lead the way by getting COVID-19 vaccine

Some criticize this move while others say the elected officials are leading by example.

DAYTONA BEACH, Fla. - From the moment the vaccines to fight coronavirus were distributed, politicians have been rolling up their sleeves -- mainly on camera -- to lead the way in getting vaccinated.

Some criticize this move while others say the elected officials are leading by example.

In Florida, Governor Ron DeSantis has determined that those 65 and older should be first in line. As a result, some have raised eyebrows at political figures who have seemingly jumped ahead of everyone else. For example, Orlando Mayor Buddy Dyer, Orange County Mayor Jerry Demings, and Daytona Beach Mayor Derrick Henry have all received a dose. 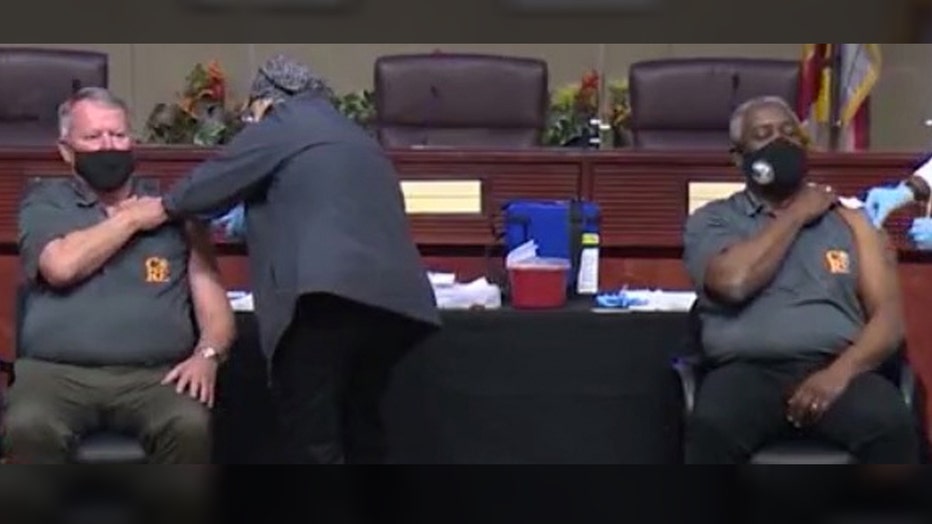 University of Central Florida (UCF) Professor Dr. Aubrey Jewett said that there may be a very good reason for political figures to push to the front of the line, explaining that it is a "form of political leadership."

Dr. Jewett said that for some citizens who question the safety of the vaccine, elected leaders getting vaccinated inspires trust, adding that "I do think that politicians who are getting the vaccine earlier than some other folks -- it is for a good cause. They are trying to do what they believe is helpful for society in the long run."

However, she warns too that this can backfire, saying that "sometimes if it looks like they are cutting in line or getting special privileges that average people don't get, that can rub the average American voter the wrong way."

FOX 35 took to the streets to talk to people about what they thought.

"I kind of think that they are being a little selfish, but I guess it is important for them to have it too," one person said.

Another said that "I would prefer to see more of the seniors and the health industry people get them first, but if the public figures and officials need to deal with the public, then yes. I think they should get something."

FOX 35 has reached out to the Mayor of Daytona Beach, who was the subject of some of that controversy. He has not yet responded.