TALLAHASSEE, Fla. - Florida Republicans decried scenes of chaos and violence in the U.S. Capitol Wednesday, after supporters of President Donald Trump stormed the building and shut down congressional debate over the certification of the 2020 presidential election.

Thousands of protesters, including many dressed in paramilitary gear, had gathered outside the Capitol in advance of what was expected to be a vote on the election certification on Wednesday.

But pandemonium in and around the Capitol called a halt to the proceedings and blocked members of Congress from voting, as they were rushed to secure locations as a mob gained entry to the building.

As the United States Capitol Building was locked-down after protests turned to violence Wednesday, Rep. Kathy Castor was told to stay inside her office in the Congressional office building. She spoke with FOX 13's Evan Axelbank via video call.

Florida Republicans, including many who have supported Trump throughout his candidacy and his four-year tenure as president, took to social media to disavow the violence.

But as reactions poured in, the state’s GOP leaders appeared careful not to condemn the president himself.

Governor Ron DeSantis, a close ally of Trump’s, weighed in with a prepared statement less than two hours after the scene began to unfold in the nation's capital and as a more mild protest took place in Tallahassee. 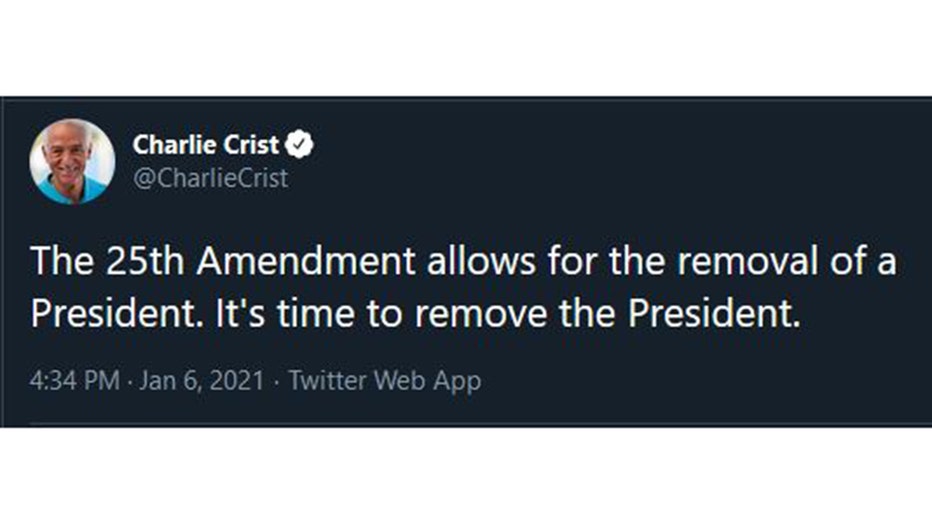 Rep. Charlie Crist (D-FL13) tweeted Wednesday that the president should be removed from office.

"Violence or rioting of any kind is unacceptable and the perpetrators must face the full weight of the law. The Capitol Police do an admirable job and I thank them for their hard work," the Republican governor said.

DeSantis has proposed a measure for the upcoming 2021 legislative session that would crack down on violent protesters in Florida.

Senate President Wilton Simpson said on Twitter he backs the proposal now more than ever.

"I’m glad (Governor DeSantis) suggested strengthening our state laws to increase penalties for bad actors who turn otherwise peaceful and constitutional protests into violent attacks on law enforcement officers and look forward to working with him on legislation this session," Simpson, R-Trilby, tweeted.

"The right to protest is very important, but there is absolutely no excuse for attacking law enforcement and destroying property," the Senate leader said in a second tweet.

"In a democracy, rioting, violence and lawlessness are repugnant and unacceptable. This isn’t a peaceful protest. It’s a tragic, cowardly and un-American spectacle," Sprowls, a former prosecutor, tweeted.

State and local GOP leaders also denounced the invasion of the U.S. Capitol.

"Storming the Capitol with no productive outcome is Antifa-ish and destruction of property & violence is never OK. Instead: Be smart. And next election be productive," Republican Party of Florida Vice Chairman Christian Ziegler wrote on Twitter.

The state’s two Republican U.S. Senators, whose votes were delayed Wednesday, were among those who rushed to condemn the chaotic scenes.

"There is nothing patriotic about what is occurring on Capitol Hill. This is 3rd world style anti-American anarchy," U.S. Sen. Marco Rubio tweeted.

Rubio also asked Trump to send "resources to assist the police and ask those doing this to stand down."

"No one has a right to commit violence. What happened today at the Capitol is disgraceful and un-American. It is not what our country stands for," Scott, a former Florida governor, said.

Presidential electors throughout the country certified their state election results in December, all but dissolving Republicans’ hopes that Trump still had a path to the 270 electoral votes required for him to win a second term.

But Trump has refused to accept the election results, repeatedly saying the election was fraudulent and urging his supporters not to accept Biden as his successor.

Wednesday’s uprising came as Republican lawmakers began to object to the election results during floor debate around 2 p.m.

U.S. Rep. Bryan Mast, a Palm City Republican who was vocal in his desire to vote against certifying the election results, also condemned the protesters’ actions.

"Attacking our Capitol and the selfless law enforcement officers defending it is as unpatriotic and appalling as it gets. The people who are doing that must stop so we can return to our democratic process!" he tweeted.

Trump, who riled a crowd of his supporters with a speech maintaining Biden’s win was a "theft" of the election before they stormed the Capitol, appeared to disavow the destruction.

"I am asking for everyone at the U.S. Capitol to remain peaceful. No violence! Remember, WE are the Party of Law & Order – respect the Law and our great men and women in Blue. Thank you!" the president tweeted.

In a video released on Twitter, Trump urged protesters to go home.

"I know your pain. I know your hurt. We had an election that was stolen from us," he said. "But you have to go home now. We have to have law and order."

Addressing the nation in a televised appearance Wednesday afternoon, Biden called on Trump to "demand an end to this siege," which he called "a dark moment" in the nation's history.

"This is not dissent. It’s disorder. It’s chaos. It borders on sedition and it must end now," Biden said.

It remained unclear Wednesday evening when the U.S. House and Senate would resume their joint session to certify the election results.

"These actions are terrorism and insurrection against the United States of America, and this attack on our country must be met with swift, severe consequences," Fried, Florida's lone statewide elected Democrat, said in a prepared statement. As events played out Washington, Trump supporters held rallies outside state capitals throughout the country, including in Tallahassee.

In front of Florida’s Historic Capitol, a group of roughly 100 Trump backers gathered in a tame display.

Clearwater resident Chris Clure was among the crowd on the Florida Capitol lawn Wednesday.

"Most of the people are all going to Washington D.C.," Clure told The News Service of Florida. "The message I think it is, is that we are still here. We are going to fight for our president."