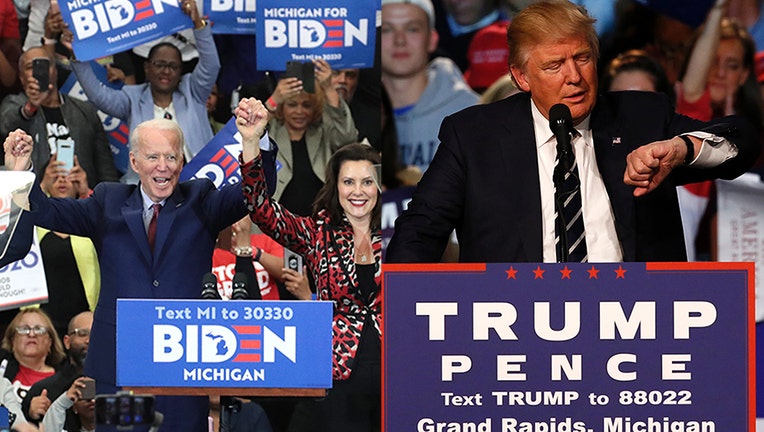 THE VILLAGES, Fla. - Known as a haven for retirees and “snowbirds,” Florida residents ages 65 and older make up nearly 21% of the Sunshine State’s population of about 21.5 million, according to 2019 census estimates.

In a state perhaps as famous for it’s “oh-so-close” presidential races as it is for its beaches, Florida’s senior citizens are expected to play a big role in deciding the nation’s most coveted swing state this November.

Professor J. Edwin Benton with the University of South Florida contends that senior voters in Florida are key to both President Trump’s and former Vice President Joe Biden’s paths to victory in the state.

“Florida has a larger than normal senior citizen population,” Benton told Fox News. “Politicians, not only in presidential elections but also in state and local ones, have to pay attention to this constituency which has a long-standing tradition of voting in large numbers.”

According to FOX News exit polls from the 2016 race, Trump topped then-Democratic nominee Hillary Clinton 57%-40% among voters age 65 and up in Florida.

But this year, the margins appear to be much tighter.

MORE NEWS: Biden says he and Trump 'shouldn't have a debate' if president still has COVID-19

If the polls prove to be true, Benton contends that the president would need to make up ground elsewhere in order to win the state again — most likely with Hispanic voters.

When it comes to adding elderly voters to one’s cause, Benton explains that it can be a challenge because these voters tend to be highly informed and engaged in the political process.

“They’re very discerning. They pay attention to issues and they don’t have any reticence about [being] for a candidate such as Trump in 2016 and then flip on him in 2020,” explained Benton, later adding, “[They might say] ‘just because I supported you four years ago doesn’t mean you have my vote again this year. You have to earn it.’”

For Jill James, a resident of The Villages — a massive retirement community with over 100,000 residents located an hour outside Orlando — the president has done plenty to earn her vote again.

“I’m voting for Trump,” James proudly told Fox News. “Look at the economy look at the unemployment before the COVID hit — it was amazing.”

RELATED: What happens after Election Day on Nov. 3?

James says her perspective of the president has changed for the better since he first took office, adding that she initially thought she was voting for “the lesser of two evils” when she supported him in 2016.

The community is known for being a passionately conservative stronghold. But even though “Trump” signs can be found all over The Villages — be they hanging from golf carts puttering around the downtown square or sitting planted in front yards — there are still a few “Biden” signs here and there as well.

We spoke to a panel of Central Florida voters to discuss the upcoming election, including how the coronavirus pandemic has impacted each guest financially.

Villages resident Mark Lehman has a “Veterans for Biden” sign on the back of his golf cart, and he’s fully prepared to support the former vice president on Election Day.

Chris Stanley, president of The Villages Democratic Club, says the latter-most issue has brought a number of registered Republicans to her door.

Over the past few months, Stanley has been working to energize the traditionally mostly silent Democratic voters in the Villages. A golf cart rally in support of Joe Biden gained nationwide attention back in August after Democratic Villagers rolled throughout the retirement community honking horns and holding signs in support of the Democratic Nominee.

Stanley estimates that they are outnumbered by Republicans at least 2:1 — but she thinks Democrats can peel off enough votes to make a difference.

“[The Villages] is still a Republican, conservative stronghold,” acknowledged Stanley. “[President] Trump will win The Villages, but he’s not going to win by the same margins he won in 2016.”

With the last three Presidential elections in Florida decided by less than 3% of the vote, and the margins expected to be razor-thin once again, Stanley believes that enough dismayed voters will switch sides in this election to give Biden the statewide victory on November 3.

John Calandro with the organization “Villagers for Trump,” does not see that happening, and contends the enthusiasm to vote among Republicans in The Villages is even greater than it was in 2016.

He points to the fact that Republicans have held golf cart rallies as well, which have received larger turnouts according to organizers.

“It’s interesting because in The Villages, I think the [enthusiasm] is actually a little higher, for one reason, and that is there are a lot more things people are seeing that could be at stake,” Calandro told Fox News.

“When you look at the things that are important to people in our demographic, we’re seeing some challenges to the country that we grew up in that we’ve never seen before with this magnitude. And, I think the energy is pretty high.”

Additionally, Calandro contends that they have added over 10,000 new Republican voters in the last four years, many of whom were Democrats or registered as “No Party Affiliation.”

“I’m very confident that we will see a significant victory and a strong turnout,” said Calandro.

With the election less than a month away, Benton says Florida is far too close to call and expects it to stay that way right up to November 3rd.

“It might be a last-minute decision. [Voters] may walk into the voting booth and close the curtain behind them, take out a penny and say “heads for one, tails for the other,” Benton said with a chuckle. “It’s going to be a squeaker in Florida.”