A Palm Coast woman is trying to figure out what kind of animal ran across her yard late at night.

PALM COAST, Fla. - The mystery of Florida's baby dinosaur may be solved!

In April, a FOX 35 viewer sent in a video of what she says appeared to be a baby dino running through her yard one night. The creature was captured on her home security camera.

"Any animal we can come up with that would be 'walking' at 3:40 in the morning, wouldn't walk this way," Cristina Ryan told FOX 35 News. "Maybe I've watched 'Jurassic Park' too many times, but I see a raptor or other small dinosaur!"

She said everyone she's shown the video to since comes up with the same conclusion: it looks like a baby dino.

"Some say a large bird, but that makes no sense -- since whatever it is appears to have front legs.  So not sure? Lol. I'm sticking with raptor myself," she joked. 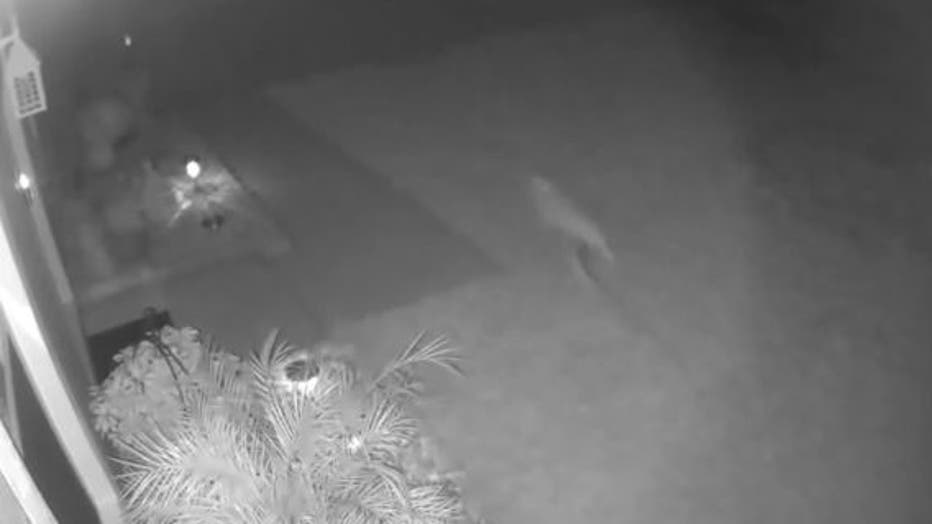 The video quickly went viral with viewers debating about what the mystery animal could be.

"It looks like a sandhill crane to me. We get them in our yards all the time," said one viewer.

"I see a leash, which is probably attached to a dog," another commenter wrote on Facebook. "But it has some fabric stuck to its head. He no doubt was checking it out and got stuck to it somehow."

Others jokingly said they weren't quite convinced that it wasn't a dinosaur. After all – it is Florida.

"I've never seen a sandhill crane run like that. Look how right before the end. Whatever it is goes lower and runs even faster. Only seen raptors run like that in the movies. Who knows – could be a dinosaur escape from a lab or a meth head, you never know in Florida."

"As a native Floridian, I can attest that this is absolutely a baby dinosaur. It came up from the underworld of the lizard Illuminati through the aquifer. All the locals know this! She must be a transplant."

In an update on Tuesday, Ryan says she is sticking with her original conclusion.

"There has never been an answer to what it was. Even despite asking neighbors. We are all still convinced it's a dinosaur!"

Watch FOX 35 News for the latest trending stories. Get your top stories delivered daily! Sign up for the FOX 35 newsletter. And, get breaking news alerts in the FOX 35 News app. Download for iOS or Android.