FOX 35 is digging deeper into how much progress the state has made in getting COVID shots into arms.

ORLANDO, Fla. - FOX 35 News is digging deeper into how much progress the state has made in getting COVID shots into arms.

Epidemiologist Dr. Jason Salemi created maps from the state data that he collects and analyzes daily. They show, by county, just how many people in each age group have received at least one dose of the vaccine so far.

"I’m at least thankful to see these numbers continue to climb every day. I know they can’t move fast enough for all of us," said USF epidemiology Associate Professor Dr. Jason Salemi.

Dr. Salemi says so far 58% of the doses the Sunshine State has received from the federal government have been administered. Governor DeSantis has said those being held back are second doses waiting to be distributed.

Dr. Salemi says this is only expected to improve as the Biden administration orders more. 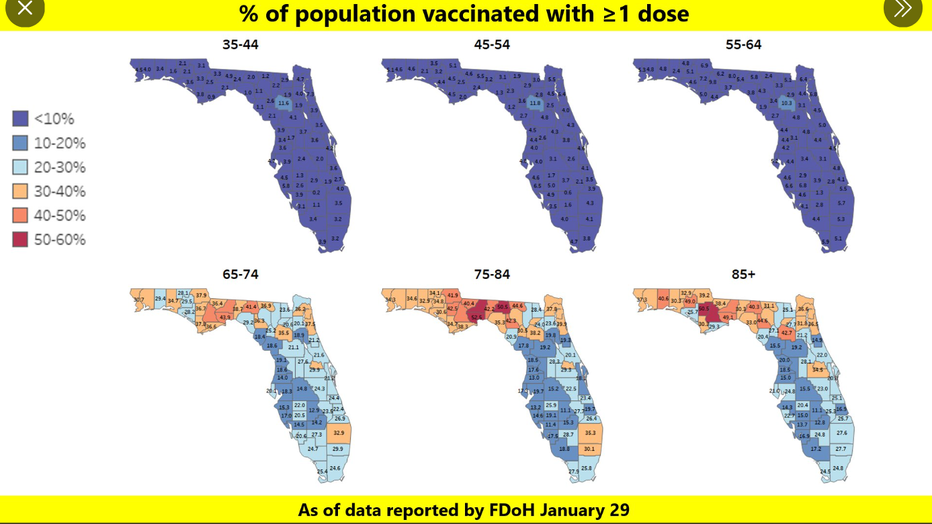 "Once we get those doses from the federal government, get them to the counties and get those vaccines inserted in the people’s arms, then obviously the more supply we get, the better job we can do with that," Dr. Salemi said.

Of the 2.1 million doses given out in Florida so far, Dr. Salemi says about 1.3 million have gone to those in the 65+ group. That’s about 28% of all people who are 65 and older in Florida.

There are so many questions for the state, including who may be in the next priority group.

FOX 35 News reached out to the state but has not heard back.