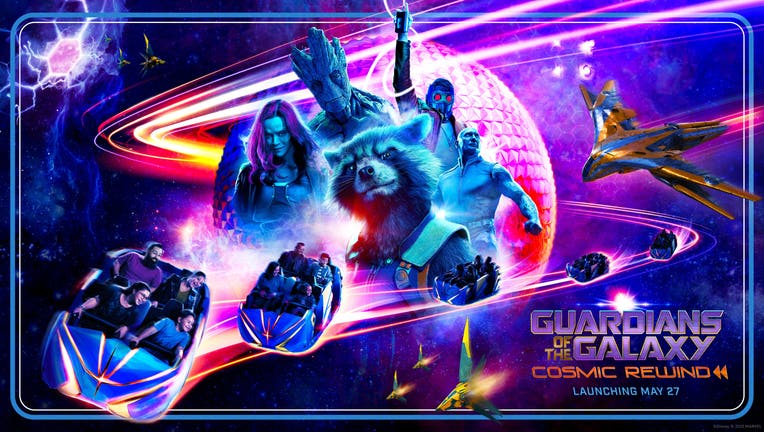 Guardians of the Galaxy: Cosmic Rewind, an all-new family-thrill coaster, launches May 27 at EPCOT at Walt Disney World Resort in Lake Buena Vista, Fla. The first-of-its-kind attraction will also open with the new Wonders of Xandar pavilion at EPCOT

ORLANDO, Fla. - Raise your hand if one of your favorite things about the "Guardians of the Galaxy" movies is the music Peter Quill (a.k.a. Star-Lord) is singing and dancing to! The songs are pure pop classics with catchy beats – which have surely been added to fans Spotify playlists.

Well, when Walt Disney's World's new ride,"Guardians of the Galaxy: Cosmic Rewind," opens at EPCOT next month, there will be an ‘Awesome Mix’ playlist of its own for riders to jam to!

RELATED: 'Guardians of the Galaxy: Cosmic Rewind' coaster opens at Disney World in May

Here are the classics you'll hear:

According to Disney Parks Blog, riders won't know which track you'll hear until you actually blast off – similar to the Rock ‘n’ Roller Coaster starring Aerosmith at Disney's Hollywood Studios. Disney Imagineers reportedly came up with a list of over 100 potential songs for the ‘Guardians’ ride before deciding on the 6 awesome tunes.

Meanwhile, Disney annual passholders who have been previewing the ride have been raving about the new ‘storycoaster.’

"Guardians of the Galaxy: Cosmic Rewind is PHENOMENAL!! I would love to say more but don’t want to spoil it for everyone. If you’re on the fence, go for it! I highly doubt you’ll regret it," Sharlene Sledge wrote on the passholders page on Facebook.

PHOTOS: Inside EPCOT'S new ‘Guardian of the Galaxy’ attraction

Rider Elizabeth Spears wrote that the ride is extremely smooth and the intensity is similar to the Slinky Dog or Seven Dwarfs Mine Train rides, but "seems more because of the music, like Rockin Rollercoaster."

Guardians of the Galaxy: Cosmic Rewind, an all-new family-thrill coaster, launches May 27 at EPCOT at Walt Disney World Resort in Lake Buena Vista, Fla. The first-of-its-kind attraction will also open with the new Wonders of Xandar pavilion at EPCOT as part of the theme park’s multi-year transformation.

The family-friendly roller coaster rotates 360 degrees and features the first reverse launch on a coaster in Disney history. It's also reportedly one of the longest enclosed coasters in the world.

You can help the Guardians save the galaxy starting May 27 when the attraction officially opens! It's all part of EPCOT's historic transformation during Walt Disney World's 50th anniversary celebration which is going on now.