Here is where downgraded Tropical Storm Ian is headed next

First responders are out rescuing people in Central Florida after Hurricane Ian flooded roads, homes, and neighborhoods. Here is a 10:30AM update on the forecast, and where now-Tropical Storm Ian is headed next.

Shortly before 5 a.m. Thursday, Ian's center was located about 40 miles southeast of Orlando and 35 miles southwest of Cape Canaveral.  The storm was clocking maximum sustained winds of 65 mph. Ian has slowed slightly in forward motion to 8 mph.

Ian was expected to be a strong tropical storm when it crosses over the Orange-Brevard county line later this morning.

Hurricane Ian made landfall on the southwestern coast of Florida, near Cayo Costa, as a Category 4 storm on Wednesday.  At that time, maximum sustained winds were reported at 150 mph, according to the National Hurricane Center (for comparison, a Category 5 hurricane has sustained winds of at least 157 mph).

By the time Ian arrives in the Orlando metropolitan area around mid-Thursday morning, further weakening is expected. The path then carries the storm off the Florida coast near the Brevard-Volusia county line by late morning or early afternoon Thursday.

The storm is forecast to emerge over the western Atlantic by late Thursday.  Ian is forecast to turn northward on Friday and approach the northeastern Florida coast, Georgia, and South Carolina coasts late Friday. 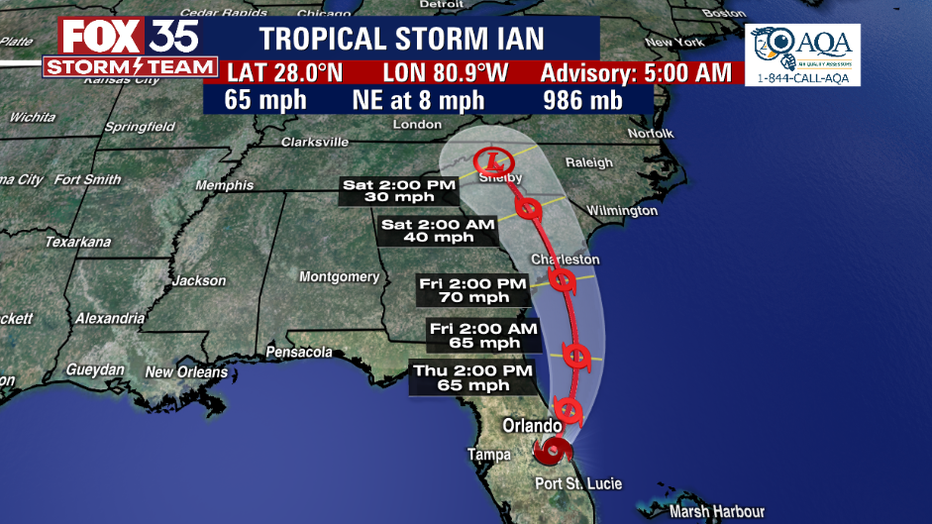 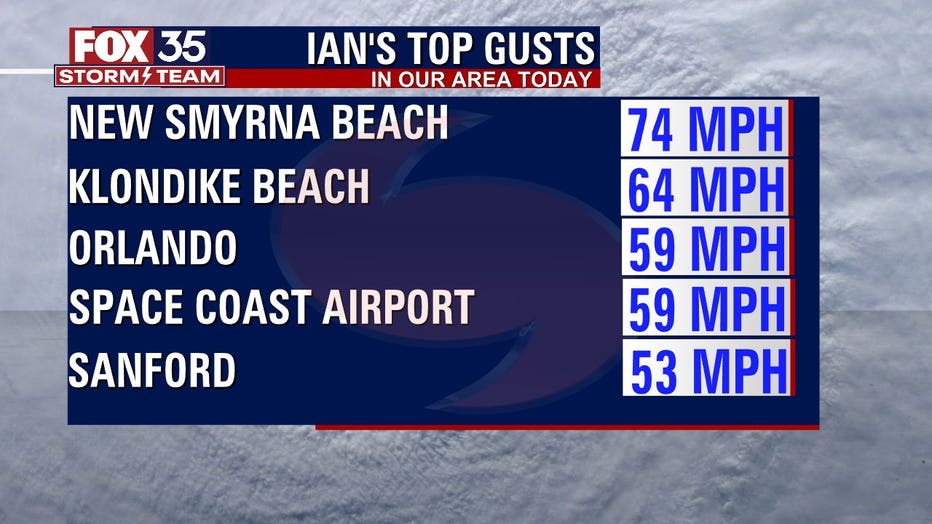 Ian was expected to cause life-threatening storm surges, catastrophic winds, and flooding throughout the Florida peninsula. Photos and videos from southern Florida have shown flooded roadways and neighborhoods. Thousands of people are already without power and that now extends into Central Florida. 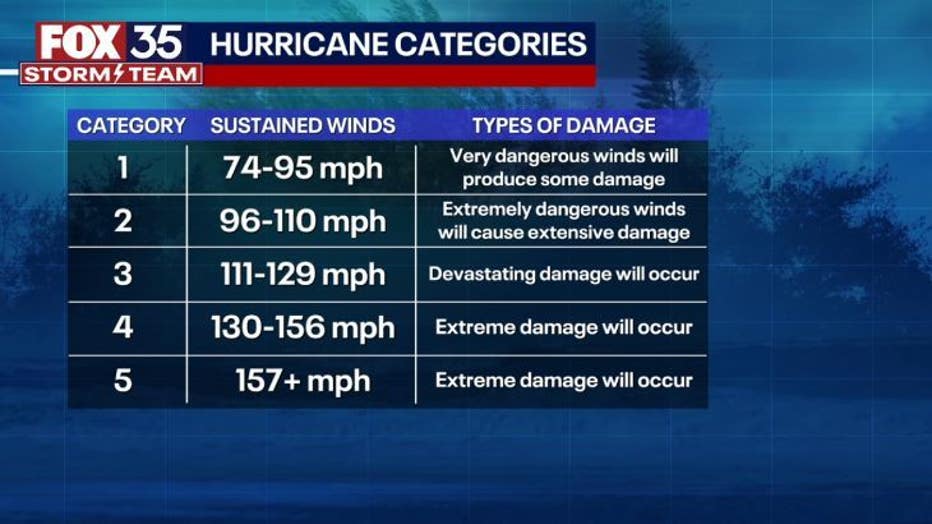 WHEN WILL HURRICANE IAN REACH CENTRAL FLORIDA? WHAT CAN WE EXPECT?

A Hurricane Warning remains in effect for East Central Florida. Additionally, a Flash Flood Warning is in effect for much of the FOX 35 viewing area. 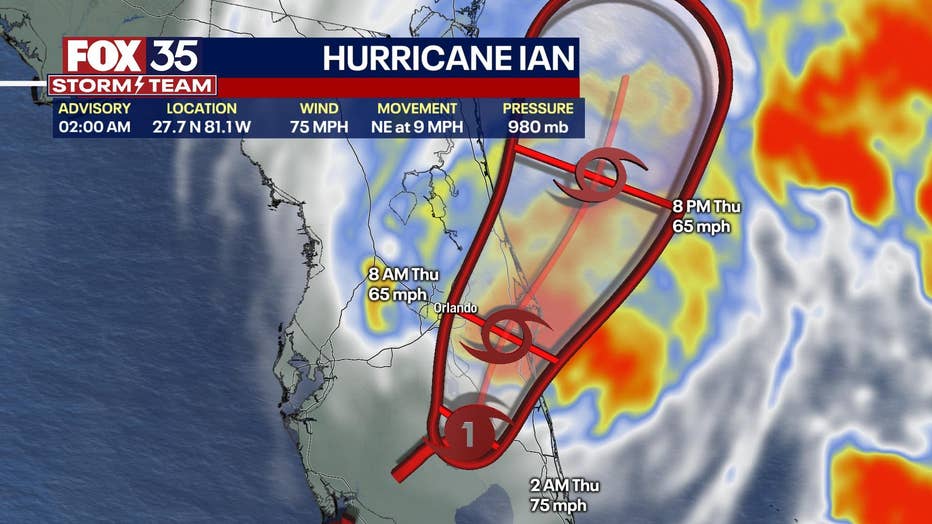 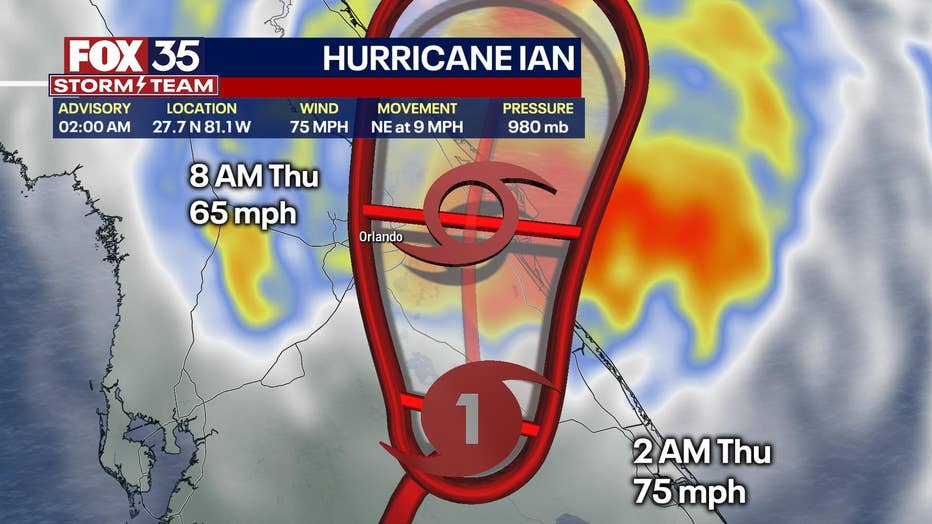 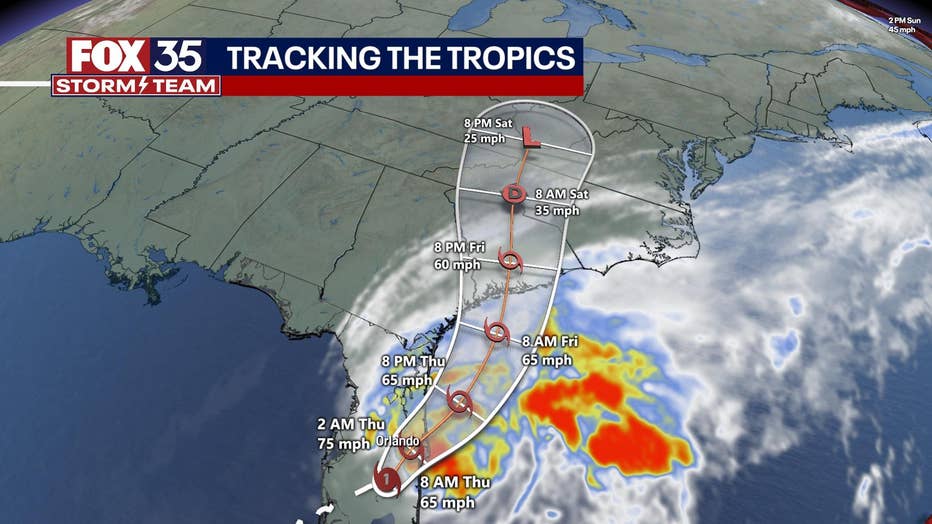 The storm is expected to move toward the Orlando metro area. The path has shifted slightly to the east and south from earlier in the day Tuesday, but significant flooding will continue to be a major risk for Central Florida before, during, and after Ian passes through the region. 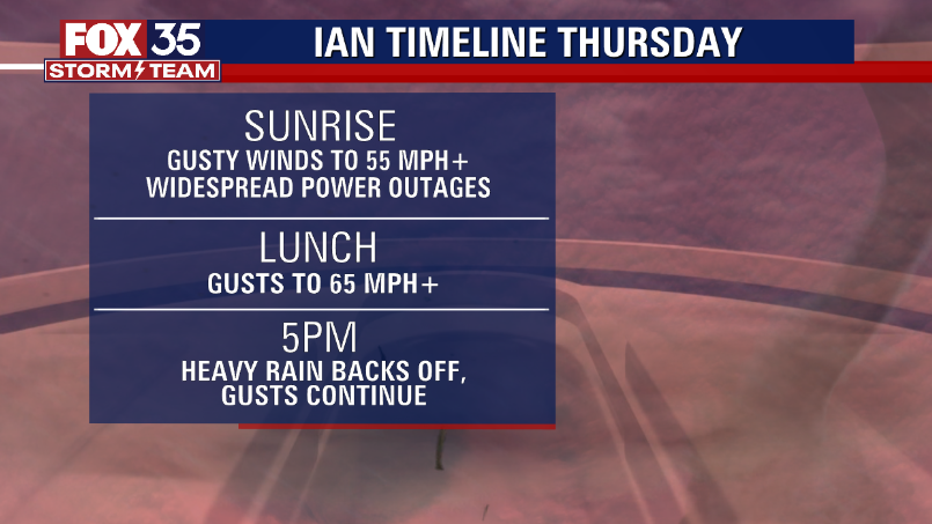 Heavy rain and flooding could ultimately Hurricane Ian's legacy. "The combination of a slow-moving tropical system along with a nearby stationary front will combine to bring Central Florida extreme rainfall totals," said Cassette. "Roads will become impassable, especially by Thursday afternoon." 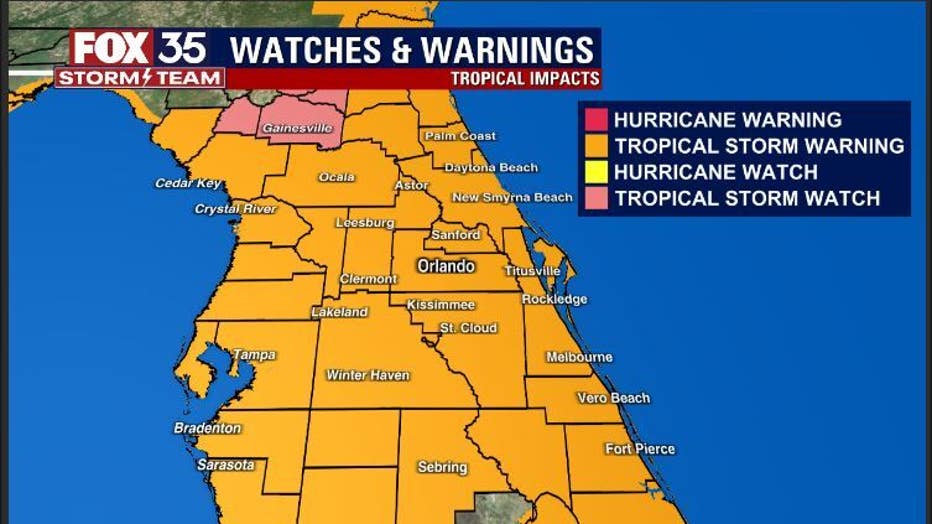 WHEN DID HURRICANE IAN MAKE LANDFALL IN FLORIDA?

Hurricane Ian made landfall at 3:05 p.m. on Wednesday off the southwestern coast of Florida, near Cayo Costa, as an "extremely dangerous" Category 4 hurricane.  It had maximum winds of 150 mph, making it the fourth most powerful hurricane to hit the state.

Harsh impacts are expected in Central Florida and the flood risk will sharply rise. The roughest weather looks to be through late Thursday morning. Conditions should ease up Thursday evening into Friday morning. Power outages can also last for days on end in some areas.

The FOX 35 Storm Team will continue to keep you informed as new developments happen with Hurricane Ian.

HOW MUCH RAIN WILL IAN BRING TO CENTRAL FLORIDA? 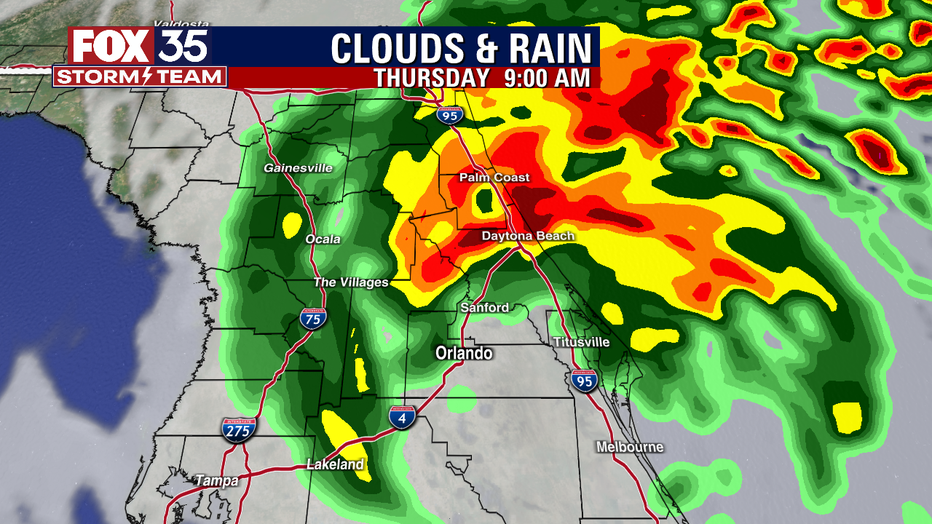 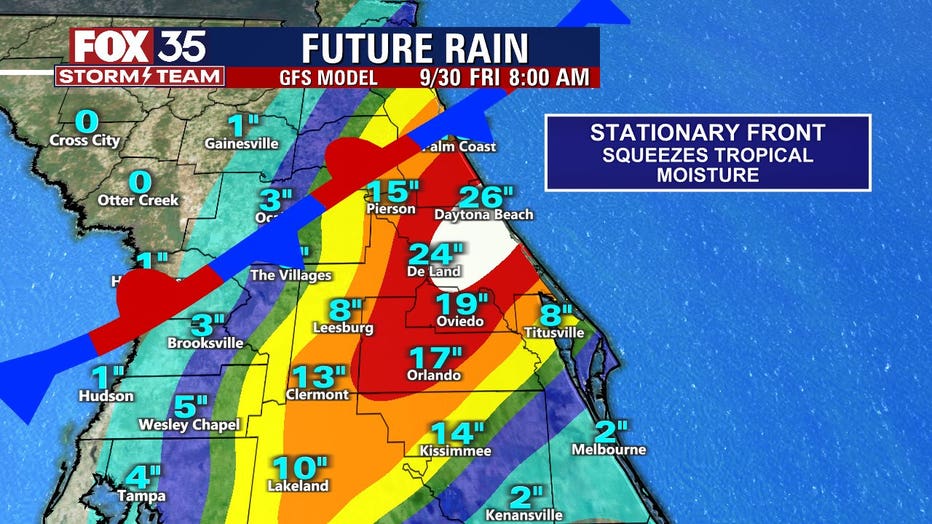 Ian is expected to produce the following storm total rainfall: Florida Keys and South Florida: 6 to 8 inches, with local maxima up to 12 inches. Central and Northeast Florida: 12 to 18 inches, with a local maximum amount of up to 24 inches.

Stay with FOX 35 for the latest on Hurricane Ian as we track the storm. 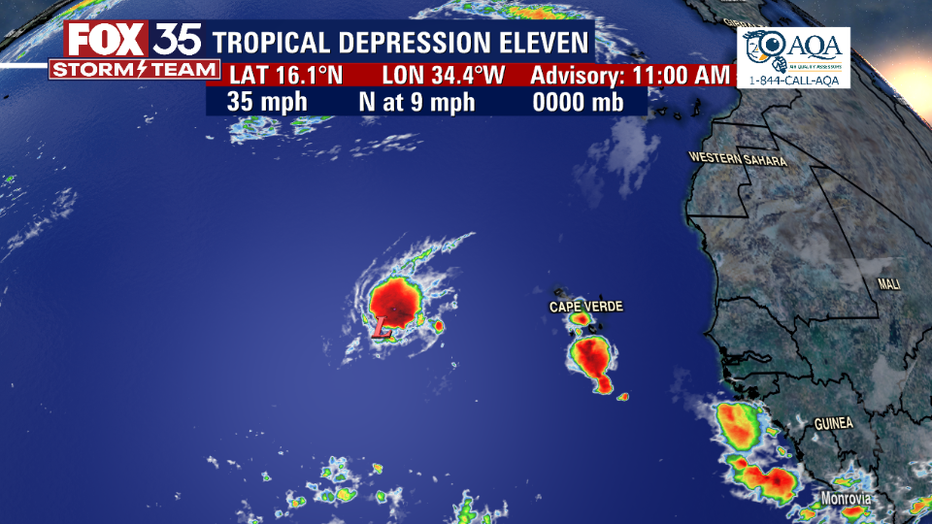 Tropical Depression Eleven is moving toward the north near 9 mph and a general north to north-northwest motion is forecast over the next several days until the system dissipates. Maximum sustained winds are near 35 mph with higher gusts.

Some slight strengthening is possible today, and the depression could become a short-lived tropical storm. If it does, it would be named Julia. However, weakening is expected by the end of this week, with the system dissipating by Saturday.