Hurricane season 2022: A look at the scars left behind

Wednesday marks the last day of the 2022 Atlantic hurricane season, and it is certainly one not to be forgotten as hurricanes Ian and Nicole left behind a trail of destruction in Florida. FOX 35 Storm Team Chief Meteorologist Jayme King has a wrap up of this hurricane season.

ORLANDO, Fla. - Wednesday marks the last day of the 2022 Atlantic hurricane season, and it is certainly one not to be forgotten.

On paper, the Atlantic season was considered average, with 14 named storms.

The Eastern Pacific had a more active season with 19 named storms, four more than average.

But, individual storms were anything but average. The hurricanes left their mark on the U.S. and history books.

Many of us will recall the unforgettable storm surge, destruction and loss of life, while the NOAA Hurricane Hunters will remember the near-constant research flights.

RELATED: Why are hurricane names retired and how is it determined?

"The month of September was one of the most intense months that we've had on record, just in terms of the volume of flights required in a short period of time," Captain Christopher Kerns, Hurricane Hunter and Commanding Officer of NOAA's Aircraft Operations Center told FOX Weather Tuesday. "We flew over 300 hours in that month alone." 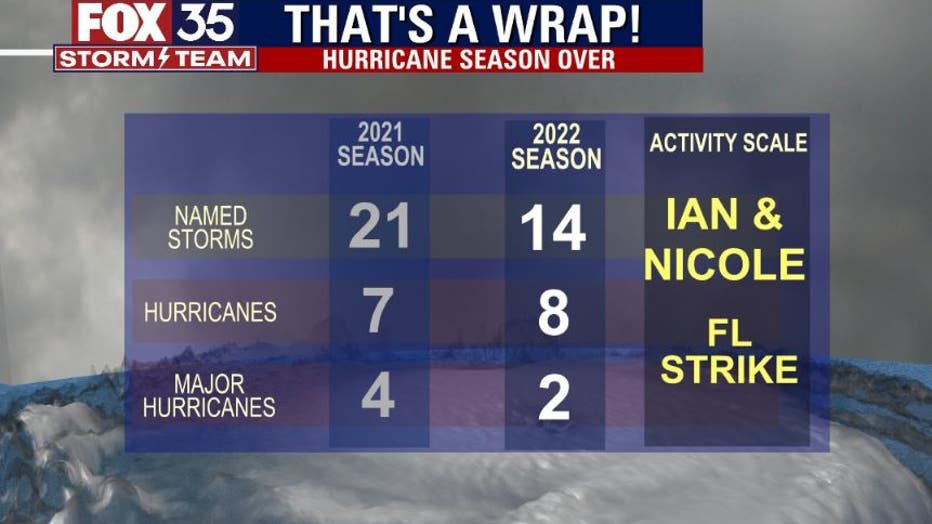 After a slow start to the season, the tropics ramped up activity in September. Only two Hurricane Hunter planes flew all those hours in 12-hour rotations.

Three names dominated the 2022 Atlantic Hurricane Season; Ian, Nicole and Fiona. Ian was the 5th strongest hurricane to ever make landfall in the U.S. as a Category 4 hurricane.

Deadliest storm of the year, Hurricane Ian, closed in on Florida's Gulf Coast on September 28.

"Prominent parts of Southwest Florida from south of Fort Myers to north of Charlotte Harbor, about 50 miles of coastline, will be changed forever," said FOX Weather Hurricane expert Bryan Norcross.

"This is an unprecedented storm for Southwest Florida. The closest in the history book occurred in 1873 when Fort Myers was a small village," Norcross continued. "It is critical that people not try to compare it to any previous storm."

Officials forced 2.5 million Floridians to evacuate from their homes.

Hundreds of thousands of Florida residents stayed behind as Hurricane Ian approached Florida. As the death count continues to rise, many are still missing.

Ian's 150 mph winds pushed the storm surge into southwest Florida just at high tide. The timing was a worst case scenario. Some beach homes sported high-water marks at nearly 12 feet on the barrier islands like Sanibel.

Hurricane Ian left a huge swath of destruction across the Southeast, and Ian will likely rank in the top 10 costliest hurricanes in U.S. history.

More than 100 people died from the storm, and reports show that most drowned. First responders rescued almost 2,500 in the Sunshine State alone.

Almost 90% of Fort Myers Beach, Florida, was destroyed by record storm surge. Beaches that used to be lined with million dollar homes were just piles of debris.

Downtown Orlando experienced flooding from Hurricane Ian. Several downtown-area lakes were flowing over their banks on Thursday including the city's iconic Lake Eola.

The monster gave one Hurricane Hunter the roughest flight of his career.

"We got rocked. The aircraft was basically overmatched at one point," Major Kendall Dunn with e the 53rd Weather Reconnaissance Squadron told FOX Weather after the flight. It was the worst thing you could have happen as a pilot."

Ian also shook up FOX News' Madison Scarpino who was reporting from the same plane.

"The craziest thing I've ever done!!" she Tweeted once safely on the ground.

Hurricane Nicole hit so late in the season, many residents had to scramble to take down Christmas Decorations. Nicole made landfall on November 10. Only Hurricane Kate hit later in 1985. Hurricane Yankee in 1935 was the only other storm that made landfall in November in the record books.

"I think one of the major players that puts Nicole down in the history books is, of course, the unusual East Coast landfall of this storm, something that hadn't happened back since 1935," said meteorologist Amy Freeze of an East Coast November landfall. "In fact, it's been 37 years since we've had a November hit for Florida at all. So this is definitely going to be a legendary season."

"It snapped a 17-year-long drought for any hurricane landfall on the East Coast. It was the longest drought on record," meteorologist Craig Herrera said. "The last hurricane there, that was all the way back in 2005, the infamous Hurricane Katrina. It hit Florida near Miami Beach, is a category one and then went over into the Gulf and became a Category 5, finally made landfall, as we know, near New Orleans, a Category 3."

A man and woman killed during Hurricane Nicole after both apparently came into contact with a fallen power line last week were brother and sister, according to the Orange County Sheriff's Office.

"Those wind fields extended a good 610 miles from the center of those tropical storm force winds," said Freeze. "I think there were some locations on the Eastern Seaboard that saw the winds onshore for more than 48 hours."

RELATED: Can hurricanes form in December after the season ends?

At one point, Hurricane Fiona was also a Category 4 hurricane but weakened to Category 1 before making landfall in Puerto Rico. Even at Category 1, the storm killed at least 12 people.

Storm surge and winds plunged the entire country into darkness as 100% of the power grid failed. The storm hit just days before the 5th anniversary of the deadly Hurricane Maria, where some Puerto Rican neighborhoods were still recovering.

Incredible video captured by an ocean drone shows the intensity of Hurricane Fiona. The Saildrone Explorer SD 1078 was deployed in Fiona's path and has sent back the first video recorded near the eye of the powerful Category 4 hurricane.

Fiona then blew into the Canadian Maritimes, where wind-churned waves washed homes into the sea. One woman was killed when her home was swept away.

Agatha, Bonnie and Julia were known for crossing over land between the Pacific and the Caribbean and/or Atlantic.

Bonnie and Julia kept their tropical storm status, though. Tropical Storm Bonnie formed in the Atlantic, moved to the Caribbean, then crossed Central America and exploded into the Pacific. Hurricane Bonnie became the fourth storm of the Eastern Pacific season. The Pacific already had Hurricane Blas and Tropical Storm Celia by that point.

Tropical Storm Julia formed in the Caribbean and crossed over Nicaragua, then ravaged the El Salvador and Guatemala coasts in the Pacific.

Start of the season forecasts versus results so far

NOAA forecasted an "above normal" North Atlantic Hurricane season which goes from June 1 to November 30:

For the Eastern Pacific Hurricane Season, NOAA forecasted a "below normal" season which runs from May 15 to November 30: