Florida woman says she was attacked during road rage incident

A Sanford, Florida woman claims she was attacked after a road rage incident escalated.

SANFORD, Fla. - A Sanford woman claims she was attacked after a road rage incident escalated.

Breanne Tarallo said that a man riding a motorcycle was weaving in and out of traffic. She said she tried to switch lanes and the driver got angry. She claimed he then threw trash at her car and started following her. She stopped at a toll booth thinking he would drive past her, but he stopped and went to her car instead.

"Next thing I know, I hear a huge smash, and my windshield was completely shattered," Tarallo told FOX 35. "He smashed the windshield and then he walked around the side and smashed my side-view mirror right here."

She said she grabbed her phone while she was still in the driver's seat, but with the driver's door opened, he hit her arm.

"That’s when he smacked my hand and called me a name and said you’re not recording me. And then grabbed my arm and shoved me," said Tarallo.

She eventually got her phone out and recorded him speeding away on his bike. 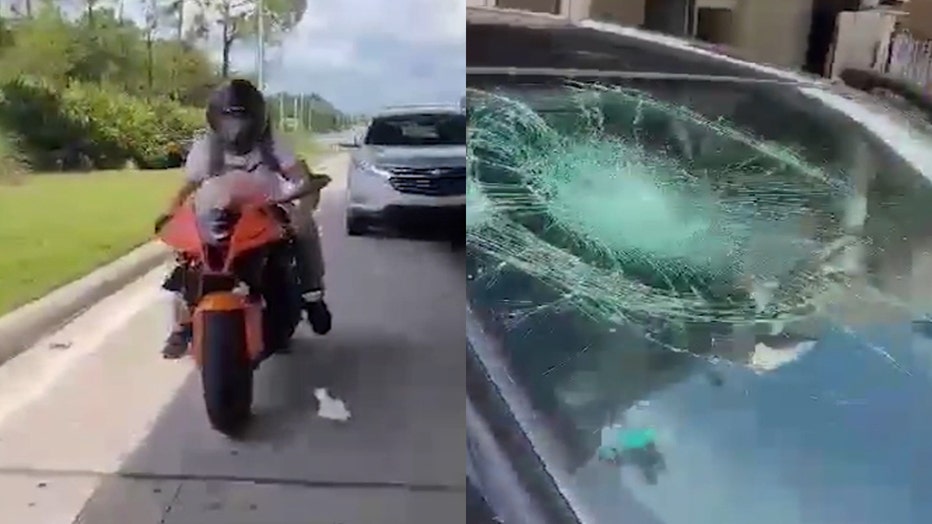 Tarallo hopes sharing her story and the video will help find the person. She said it was a terrifying situation that has left her with more questions than answers.

"I didn’t cut him off. It wasn’t anything like that. So, I’m not understanding why he got so aggressive over that," said Tarallo.