Colby Rock could be seen in an altercation with Carlo Eberhardt, 48, on Saturday afternoon at Daytona Beach’s A1A during Truck Week.

DAYTONA BEACH, Fla. - A young man says he is thankful to be alive after he was involved in a shooting during Daytona’s Truck Week this year.

Colby Rock was shot after an incident that occurred on the A1A.

"Colby’s initial thoughts in his head were I could run for my life or get shot right here right now," said Allie Meshoto. A witness captured the moment as those words circled through Colby’s head.

Rock could be seen in an altercation with Carlo Eberhardt, 48, on Saturday afternoon at Daytona Beach’s A1A during Truck Week. Eberhardt could be seen raising his gun and pulling the trigger.

"I’m just glad to be alive," Rock said. He spoke exclusively to FOX 35 on Wednesday. "It hurts like hell to be alive but I’m here I’m here."

Witnesses told deputies that Eberhardt and Kristi Ellis, 39, were driving a Nisson Altima that cut them off in traffic and tailgated them for miles. At a light, Ellis pulled up alongside them and waved a gun.

Eberhardt got out of the passenger side and walked up to Colby’s window with a gun in hand.

"I was honestly terrified and I didn’t know what to do," said Meshoto.

Colby told her and his friends in the car to run as he tried to calm down Eberhardt but was unsuccessful. The bullet ripped through Colby’s arm before getting lodged in his collarbone.

"A centimeter to the left and we wouldn’t be talking at this time," said Colby’s mother Lisa Ash. "I’d be burying my youngest son." 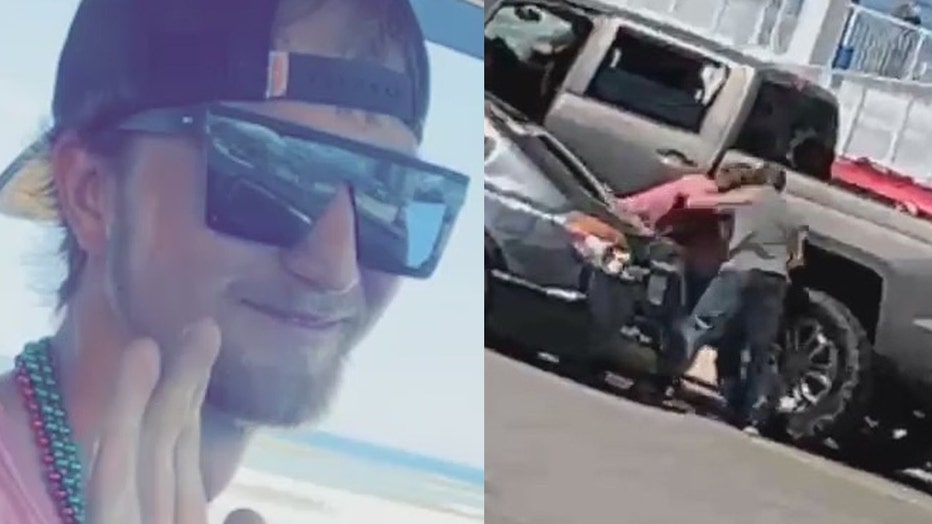 Eberhardt and Ellis were both arrested on felony charges.

WEATHER ALERT: More rain in Central Florida: When will it finally clear up?

"We are just trying to take this one day at a time and get through this," said Ash.

The family has started a GoFundMe to help cover Colby's medical costs. He will be out of work for two months while he recovers. Click here to donate.