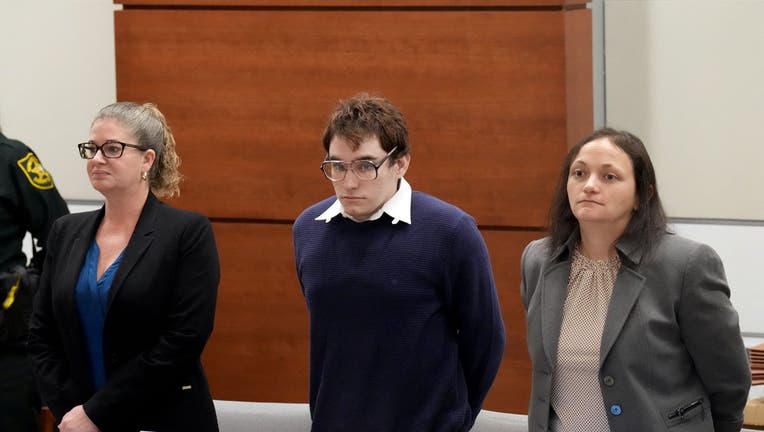 FORT LAUDERDALE, Fla. (AP) - Florida school shooter Nikolas Cruz will be sentenced to life without parole for the 2018 murder of 17 people at Parkland’s Marjory Stoneman Douglas High School, after the jury said Thursday that it could not unanimously agree that he should be executed.

The jury’s recommendation came after seven hours of deliberations over two days, ending a three-month trial that included graphic videos, photos and testimony from the massacre and its aftermath, heart-wrenching testimony from victims’ family members and a tour of the still blood-spattered building.

Under Florida law, a death sentence requires a unanimous vote on at least one count. Circuit Judge Elizabeth Scherer will formally issue the life sentences Nov. 1.

Cruz, his hair unkempt, largely sat hunched over and stared at the table as the jury’s recommendations were read. Rumblings grew from the family section — packed with about three dozen parents, spouses and other relatives of the victims — as life sentences were announced. Many shook their heads, looked angry or covered their eyes.

Cruz, 24, pleaded guilty a year ago to murdering 14 students and three staff members and wounding 17 others on Feb. 14, 2018. Cruz said he chose Valentine’s Day to make it impossible for Stoneman Douglas students to celebrate the holiday ever again.

The massacre is the deadliest mass shooting that has ever gone to trial in the U.S. Nine other people in the U.S. who fatally shot at least 17 people died during or immediately after their attacks by suicide or police gunfire. The suspect in the 2019 massacre of 23 at an El Paso, Texas, Walmart is awaiting trial.
Lead prosecutor Mike Satz kept his case simple for the seven-man, five-woman jury. He focused on Cruz’s eight months of planning, the seven minutes he stalked the halls of a three-story classroom building, firing 140 shots with an AR-15-style semiautomatic rifle, and his escape.

He played security videos of the shooting and showed gruesome crime scene and autopsy photos. Teachers and students testified about watching others die. He took the jury to the fenced-off building, which remains blood-stained and bullet-pocked. Parents and spouses gave tearful and angry statements.

Roses brought to honor love on that Valentine’s Day in 2018 lay withered, their dried and cracked petals scattered across classroom floors still smeared with the blood of victims gunned down by a former student more than four years earlier.at 8 p.m.

Cruz’s lead attorney Melisa McNeill and her team never questioned the horror he inflicted, but focused on their belief that his birth mother’s heavy drinking during pregnancy left him with fetal alcohol spectrum disorder. Their experts said his bizarre, troubling and sometimes violent behavior starting at age 2 was misdiagnosed as attention-deficit/hyperactivity disorder, meaning he never got the proper treatment. That left his widowed adoptive mother overwhelmed, they said.

The defense cut their case short, calling only about 25 of the 80 witnesses they said would testify. They never brought up Cruz’s high school years or called his younger half-brother, Zachary, whom they accused of bullying.

In rebuttal, Satz and his team contended that Cruz did not suffer from fetal alcohol damage but has antisocial personality disorder — in lay terms, he’s a sociopath. Their witnesses said Cruz faked brain damage during testing and that he was capable of controlling his actions, but chose not to. For example, they pointed to his employment as a cashier at a discount store where he never had any disciplinary issues.

Prosecutors also played numerous video recordings of Cruz discussing the crime with their mental health experts where he talked about his planning and motivation.

The defense alleged on cross-examination that Cruz was sexually molested and raped by a 12-year-old neighbor when he was 9.