A local veteran named Papa John has gone viral on TikTok with his dance moves and talking about how he enlisted in the Navy.

UMATILLA, Fla. - A three-time war veteran in Lake County went viral on TikTok for sharing stories about his time in the military.

John “Papa John” McCrary, served in War World II, Vietnam and Korea as a Navy Seebee. The 92-year-old now lives in Mt. Dora and goes to the Combat Café every day for breakfast.

During one of his frequent trips, Combat Café Co-Owner Beth Chambers said she recorded their conversation and uploaded the video to TikTok.

“I wanted people to know him and know his stories and just love him as much as we do,” Chambers said.

In the video that has been viewed 1.5 million times, Papa John tells the story of how he tried to change the year on his birth certificate when he was 17-years-old so he could enlist in the military.

“I erased half of the eight off and made it a 3 and I went down to the recruiting office and this storekeeper said, Do I look like I got stupid tattooed on my forehead. Get outta here and come back when your mama will sign for you.” 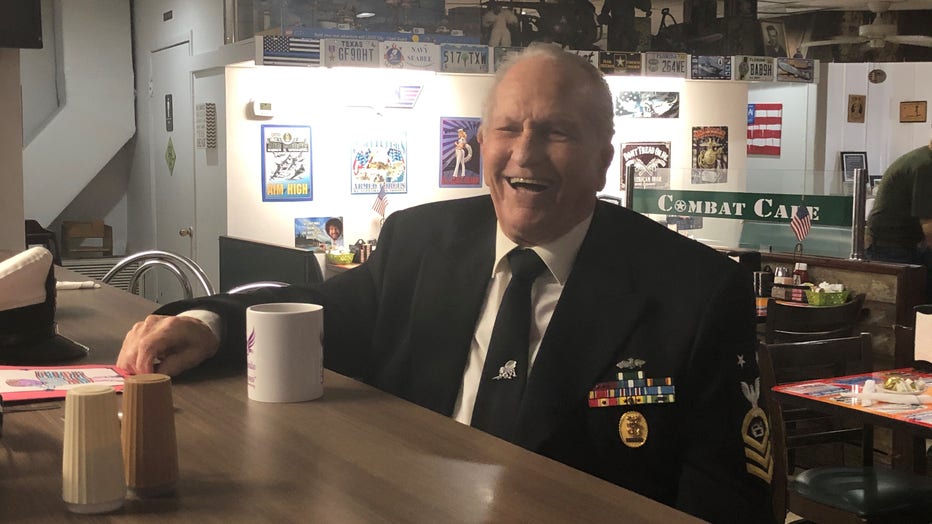 Papa John said his mother eventually signed for him and he turned 18-years-old at the Battle of Okinawa.

He spent 27 years in the Navy, saying he learned several life lessons from his superiors along the way, including one who gave him a lesson on using vulgar language after hearing him cuss.

“He said if you can’t express yourself using ordinary adjectives then you throw a cuss word in so that’s a sign of ignorance. I haven’t cursed since then.”

Papa John and Combat Café employees have since made several dancing Tik Tok videos and videos where he is giving advice to the younger generation. He said he has no idea why people are interested in watching him.

“I don’t know why they picked me other than I’m a little goofy. Beth and I are always messing around doing crazy stuff.”

His advice for the younger generation is to enjoy life and remember, “We’re not in charge here. The man upstairs is running this place.”