The man stayed aboard the ship that rescued him until it arrived back to shore in Pennsylvania on Tuesday.

PORT CANAVERAL, Fla. - On Sunday, the U.S. Coast Guard nearly 90 miles off the shore of Port Canaveral rescued 62-year-old Stuart Bee. He was found clinging to the four feet of his 32-foot capsized boat that was sticking out of the water.

Bee first left Port Canaveral on Friday and was reported missing on Saturday when he did not return. Thankfully, he was rescued on Sunday.

A man was rescued nearly 90 miles off the coast of Port Canaveral, clinging to his boat.

He stayed aboard commercial cargo ship "Angeles" -- the boat that rescued him until it arrived back to shore in Delaware on Tuesday.

Bee spoke as he exited the boat.

"I had an incident out there. It was pretty dire but looking back at it now, thanks to the crew of the Angeles, they picked me up, and it seems not so bad after all," he said. "But for a minute there, I was thinking, this is very bad. There's no one around and I'm trying to think of what I could do to get help."

He explained that "I was out there stargazing, it was beautiful, and I fell asleep and the water came gushing in and pushed me out to the front. I took in a little bit of water but I opened the hatch in the front and got out that way. I hung on to a few floating cushions and fortunately, the boat did not sink but I wasn't sure if it was going to. So, I held on to the cushion and the boat. I was there about three hours but they say maybe longer." 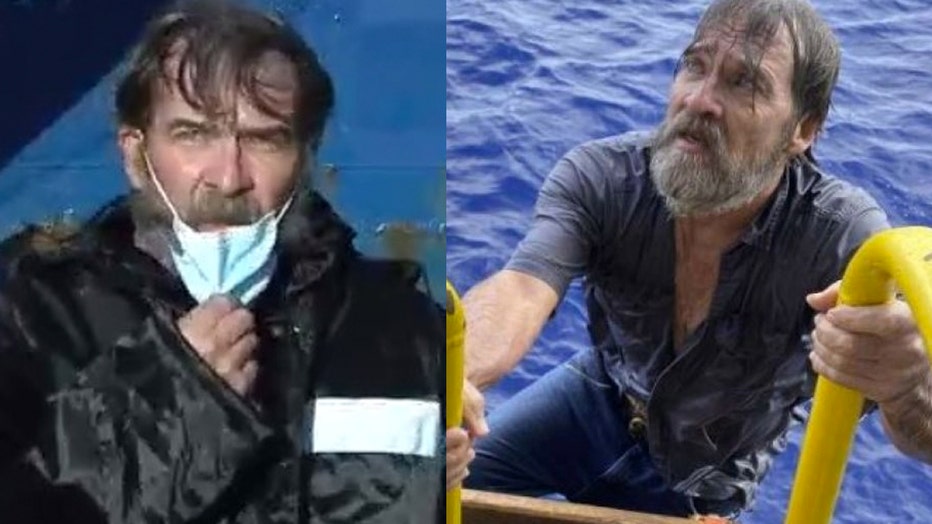 A man who was rescued after he was found clinging to a boat over the weekend has returned to shore. (Left photo by WTXF, right photo by the US Coast Guard)

"The entire crew had this sense of joy that they had found me," Bee went on to say. "For me, I went from feeling a major concern to suddenly a feeling of relief, calmness, this relief that this is over."

He also added that it "feels good" to be back on the ground and that his experience on the boat was "better than a cruise ship" as the crew was "the nicest people ever" and "we're all friends now."