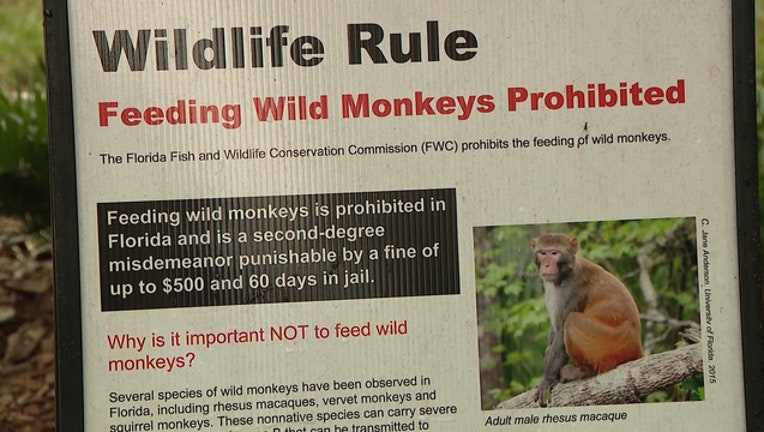 MARION COUNTY, Fla. (WOGX FOX 51) - Is the monkey population getting out of control in Marion County?  A new study, published in the Journal of Wildlife Management, says the number of rhesus macaques could double by 2022 if officials don’t intervene.

That is a possible public health problem. Scientists say the monkeys can carry the Herpes B virus, which if passed to humans, can be fatal.

“They do have the entire river and beyond – nothing is confining them anywhere,” said Sally Lieb, Silver Springs State Park Manager.

The monkeys, which aren’t native but have been in the area for decades, often show up at Silver Springs State Park and they can get aggressive.

“Last Thursday, when we closed this down again, the group that was out here was starting to charge people,” Lieb said.

Lieb says when the monkeys move it, they shut down areas of the park. Officials also have signs posted warning visitors about the animals and letting them know that feeding the monkeys is a misdemeanor offense.

But is that enough? The new research points out that no one has done anything to reduce the monkey population since 2012.

“We know that they are not native to Florida, we know the population is growing, we expect that we could have more problems than we have now in the future. There is some sort of solution needed we just, at this time, don’t know what that is,” Lieb said.

The News Station reached out to Florida Fish and Wildlife for answers – they referred us to the Department of Environmental Protection.

A spokesperson for that agency said, “At this time we are continuing to work with FWC on the management of the monkey population at the park.”