On Tuesday, NASA began rolling out the Space Launch System (SLS) rocket and Orion capsule ahead of a test launch for its Artemis I mission later this month.

KENNEDY SPACE CENTER, Fla. - On Tuesday, NASA began rolling out the Space Launch System (SLS) rocket and Orion capsule ahead of a test launch for its Artemis I mission later this month.

"We are ready to roll!" NASA tweeted on Monday.

Engineers and technicians at NASA’s Kennedy Space Center in Florida completed testing and checkouts of the Artemis I Moon rocket.  The rollout was expected to begin around 9 p.m. EDT at Kennedy Space Center on Tuesday, NASA said, but it was delayed for almost two hours due to nearby lightning. 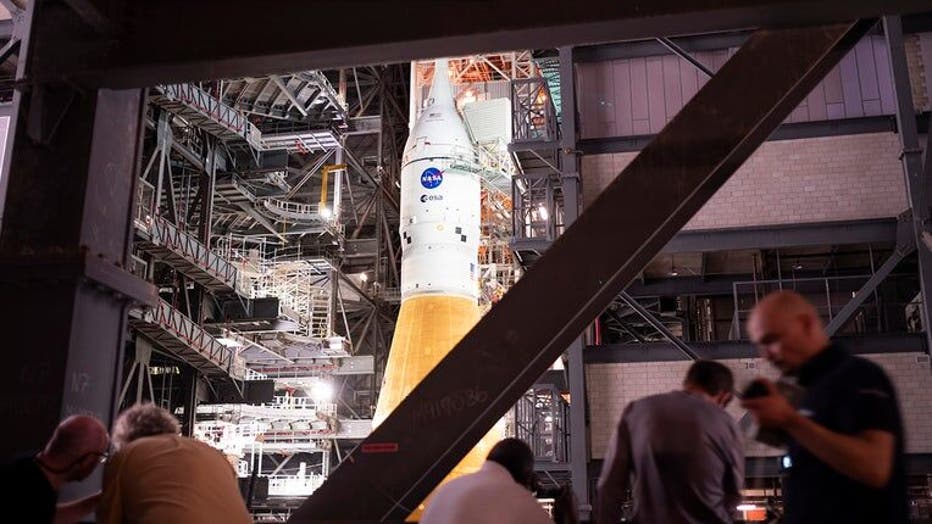 RELATED: What is NASA's Artemis 1 mission going to do?

On Monday, NASA posted video of the crawler-transporter rolling to the Vehicle Assembly Building.

The Artemis launch is scheduled for Monday, Aug. 29 from Kennedy Space Center. The space agency also has Sept. 2 and Sept. 5 as backup launch dates.

The uncrewed mission will be a huge step in the efforts to send humans back to the moon. Here are the tentative launch and return dates for Orion if the current timeline sticks:

When the Artemis I test flight happens, a crewless Orion will be sent on a path around the moon and back to Earth, splashing down in the Pacific Ocean. While no astronauts will be on board this flight, three manikins named Campos, Holga and Zohar will ride along and collect data throughout the mission.

The first astronaut flight around the moon will be known as Artemis II, leading up to the return to the moon with Artemis III in 2025.