The story of the 'Blue Marble' photo

It's not totally clear who shot the iconic image, but one astronaut thinks he knows.

It’s an iconic photo of our home planet: The wispy white clouds and ice caps swirling with the blues and tans of the land and sea – all standing in stark contrast to the blackness of space. But you may not know the full story behind this unique view of Earth.

The so-called "Blue Marble" photo was taken 50 years ago on December 7, 1972 during the last Apollo mission to the moon. The Apollo 17 crew – Eugene Cernan, Ronald Evans and Jack Schmitt – were five hours and 18,000 miles into their trip to the moon when one of them took the picture.

NASA credits the whole crew with the photo but Schmitt later said he thought he’d shot the actual image, crediting his 70-millimeter Hasselblad camera equipped with an 80-millimeter Zeiss lens. 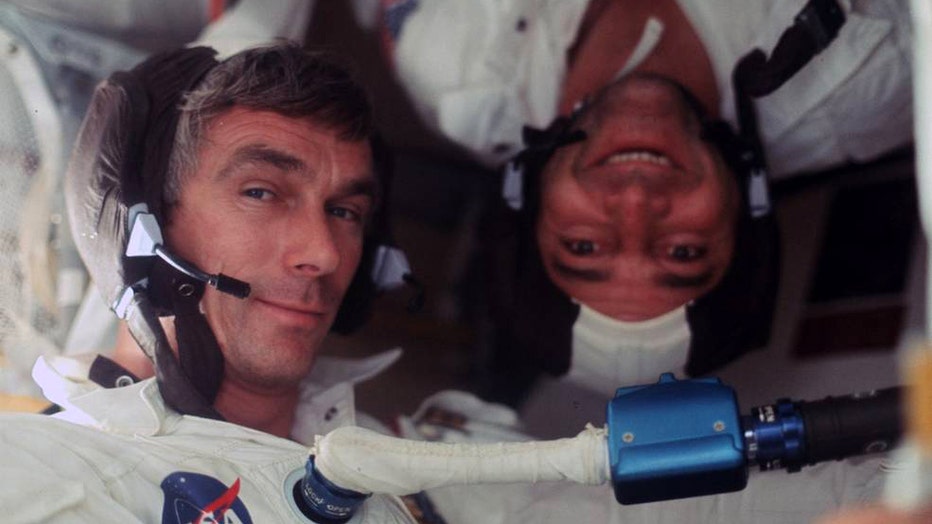 Later during that mission, Schmitt became the only certified geologist (with a Ph.D from Harvard, no less) to visit the lunar surface. He and Cernan spent over 20 hours walking on the moon, more than any of the previous 10 astronauts.

After his return to Earth, Schmitt was elected to the U.S. Senate, representing his native New Mexico. 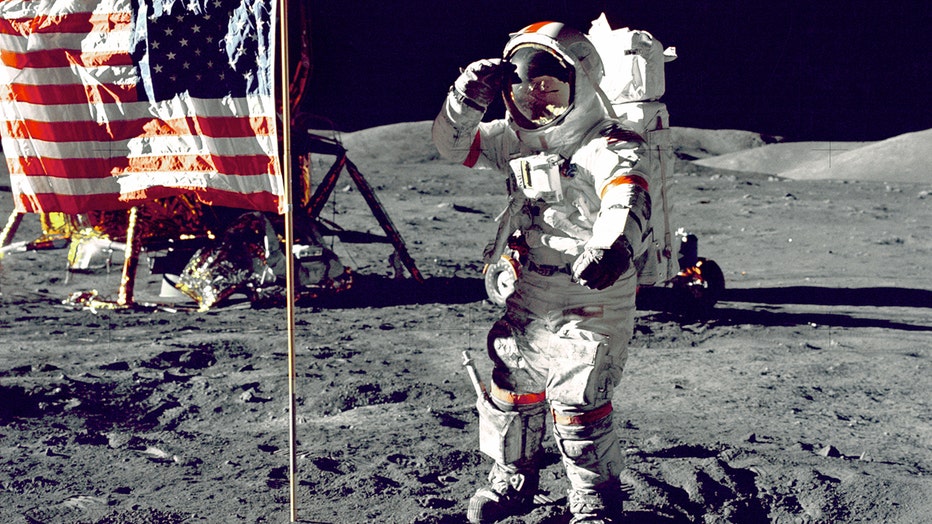 Eugene A. Cernan, commander of Apollo 17, salutes the flag on the lunar surface on NASA's final lunar landing mission. The Lunar Module "Challenger" is in the left background behind the flag. (NASA photo)

Cernan, meanwhile, became known as the last man – to date – to walk on the moon, offering his own quote as he climbed off the lunar surface for the last time:

"We leave as we came and, God willing, as we shall return: With peace and hope for all mankind."

The Blue Marble photo, though, has proven to be the crew’s best known legacy.  NASA released the image on Saturday, December 23, 1972, and it made the front page of most newspapers over that long Christmas weekend.

Cornell University biochemist Dr. Gregory Petsko later explained that the photo’s release came during the beginning of heightened environmental activism of the 1970s, just two years after the first Earth Day.  The image, Petsko said, quickly became a symbol of the young movement.

"Our whole planet suddenly, in this image, seemed tiny, vulnerable, and incredibly lonely against the vast blackness of the cosmos," he wrote. "It also seemed whole in a way that no map could illustrate." 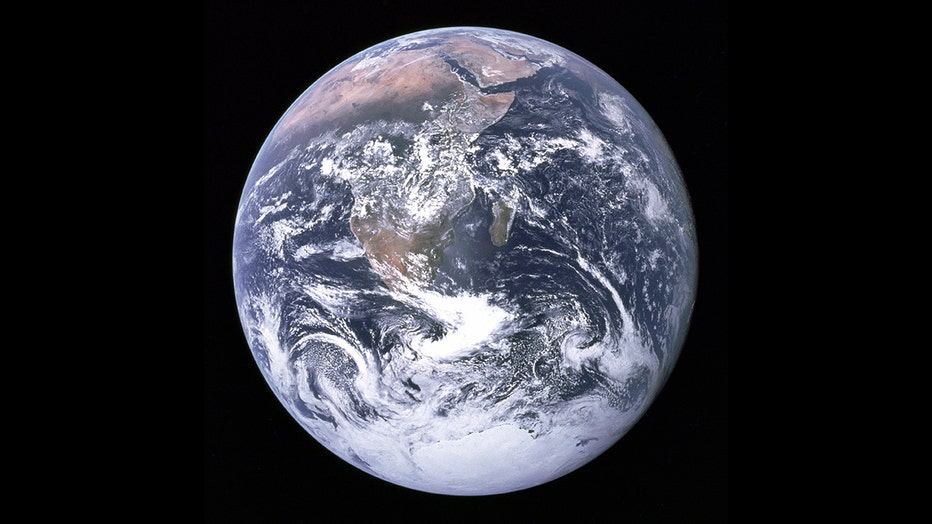 View of the Earth as seen by the Apollo 17 crew traveling toward the moon. This translunar coast photograph extends from the Mediterranean Sea area to the Antarctica South polar ice cap. This is the first time the Apollo trajectory made it possible t

NASA says the Blue Marble is the agency’s most requested image, and one archivist believes it is one of the most widely distributed images in human civilization.

Even though satellite images have now become commonplace in our lives – you can even watch a live camera from the International Space Station from your living room chair around the clock, or live views from the Orion capsule currently returning from lunar orbit – the Apollo 17 crew knew their photo would always hold a special place in history.

"It’s because we’re earthlings," Schmitt told 'Smithsonian Magazine' in 2002. "Even the first generation to settle on the Moon will think of the Earth as home."

An unusual view, even for Apollo 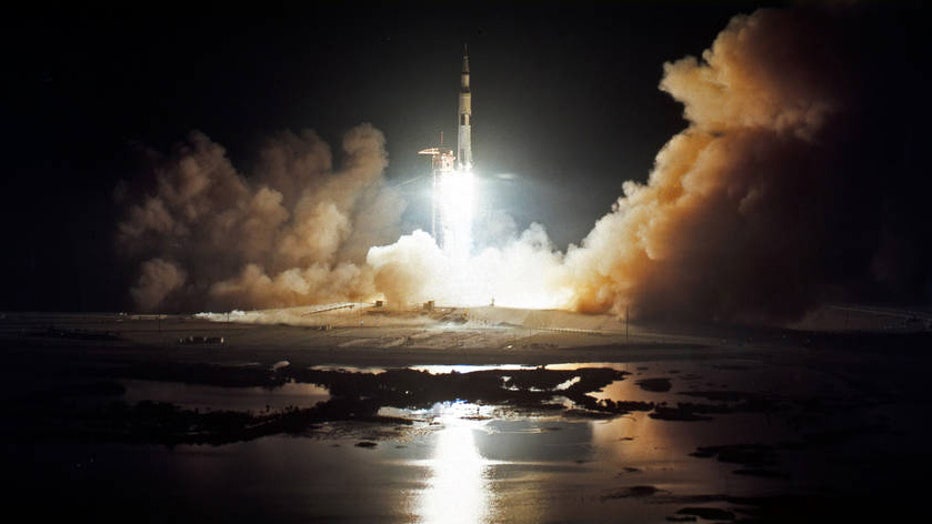 Apollo 17's launch at 12:33 a.m. Florida time was the only night launch of the mighty Saturn V rocket. It meant that Africa was in daylight during the early hours of the spacecraft's flight. And with the December solstice approaching, Antarctica was also illuminated.

This was one of the very first times that astronauts could see the entire Earth illuminated from that distance; previous missions had seen more4 of a crescent Earth. It was also the first Apollo mission trajectory that put the south polar ice cap in view.

The image was technically taken upside-down from what we expect – because there is no up or down in the weightlessness of space. It’s usually turned 180 degrees to match our visual expectation of south being "down."

The 1972 Tamil Nadu cyclone can be seen in the top right of the Blue Marble image. The storm had brought flooding and high winds to the Indian state of Tamil Nadu on December 5, two days before the photograph was taken.

Return to the moon

Apollo 17 marked the last time that a capsule headed to the moon – until NASA's Artemis I mission blasted off last month. Its uncrewed Orion capsule is now on its way back to Earth after spending the last week in a distant orbit around the moon, sending back stunning photos that some have compared to the original ‘Blue Marble’ pic.

Orion spacecraft captures breathtaking images of the Earth and moon

As Orion began its closest approach to the moon yet, NASA shared live views of the moon and Earth as seen from the Artemis I spacecraft.

The mission is a test of the new capsule, which is larger than its Apollo predecessor. If all goes well, humans will be aboard for Artemis II's flight around the moon as soon as 2024.

The goal of the Artemis program is to return humans, including the first woman and person of color, to the lunar surface on a more extended basis than the Apollo missions. NASA is hoping that could be as soon as 2025.