A hot fire test for NASA's Artemis mission was halted on Saturday.

MELBOURNE, Fla. - A hot fire test for NASA's Artemis mission was halted Saturday after one of the SLS booster's main engines shut down.

NASA engineers were planning to conduct the static fire test on Saturday, taking the United States one step closer to sending astronauts back to the moon.

However, the test launch was halted after a booster's main engine shut down.

Nevertheless, NASA is planning to launch a test mission by the end of 2021.

The new rocket will carry the spaceship designed to fly the next man and first woman to the moon by 2024. It will be the first mission to the moon in almost 50 years.

"We are really entering a new era of human spaceflight," said Bresnik."It is unbelievable that we can continue to make these types of milestones in the past year when we have been dealing with the virus. So this has been really a good time for our space program."

RELATED: SpaceX to send up first Starlink mission of 2021 on Monday

The first steps of the Artemis program include stacking parts of the SLS rocket called the boosters and working on the Orion capsule, the "top hat" of the spacecraft. One day, the now empty capsule will transport the first woman and next man to our nearest neighbor: the moon. 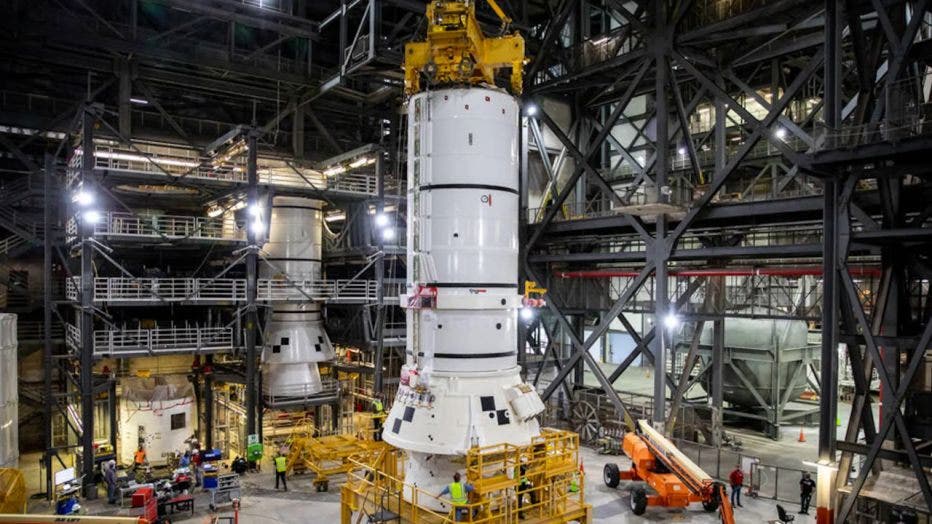 NASA said Orion "will serve as the exploration vehicle that will carry the crew to space, provide emergency abort capability, sustain the crew during the space travel, and provide safe re-entry from deep space return velocities."

"This will be the first time we are launching the integrated spacecraft and rocket system. So lots of tests will be happening. I know I will be a little bit nervous. I know I will be really excited because we are counting on this test mission to then be able to launch crew on the next mission," said Cathy Koerner, the Orion program manager.

"There is a lot of work to be done. We are just getting started," Bresnik said.

The U.S. is the only country to have placed astronauts on the moon, having last done so in December 1972 during the Apollo 17 mission. Only 12 men, all Americans, have set foot on the moon.