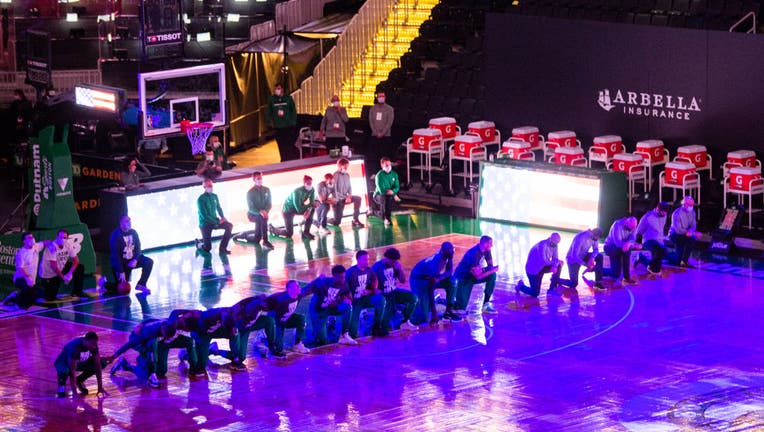 BOSTON, MA - JANUARY 15: The Boston Celtics players and coaching staff take a knee during the playing of the National Anthem prior to the start of the game against the Orlando Magic at TD Garden on January 15, 2021 in Boston, Massachusetts. NOTE TO U

ORLANDO, Fla. - At the Amway Center, Orlando Magic team members stand as the National Anthem is played. But that wasn't the case in Dallas until the NBA commissioner stepped in.

We talked to Orlando Magic Co-founder Pat Williams about Cuban.

"My initial thought was, what in the world were they thinking about. Suddenly to announce, we’re going to be the only team in the history of sports not to play the National Anthem. Didn’t make sense to me," Williams said.

Mark Cuban released this statement to explain his decision.

"We respect and always have respected the passion people have for the anthem and our country. But we also loudly hear the voices of those who feel that the anthem does not represent them. We feel that their voices need to be respected and heard," said Cuban. "Going forward, our hope is that people will take the same passion they have for this issue and apply the same amount of energy to listen to those who feel differently from them. Only then we can move forward and have courageous conversations that move this country forward and find what unites us."

"Why did it take 13 games or however many games there were in the NBA season before anybody even noticed?" asked Orlando Sentinel Sports Columnist and radio host Mike Bianchi.

We asked Bianchi if the controversy takes away from the game.

"There’s been a huge outcry, probably shocked Mark Cuban to his core. Respect for those who have given their lives for the safety of our country. There’s a lot more to it than just a song being played," Williams added.

Williams said despite the pandemic, 2,300 fans come to Amway to watch the Orlando Magic play each night and of course, listen to the National Anthem.