A waitress is being credited with saving the day after noticing a boy in distress at her restaurant. You could call it a mother's intuition.

ORLANDO, Fla. - The Orlando restaurant manager who saved a young boy from suspected abuse was given a special recognition on Tuesday.

"The award is presented in recognition of your courageous efforts to identify and report child abuse to local law enforcement authorities," Demings said.

Carvalho took time to remind people that if you see something, say something.

She made national headlines this year after using a secret note to ask the boy if he needed help while she was working at the Mrs. Potato restaurant on Kirkman Road.

Carvalho said she was working on her day off on New Year's Day when she noticed at one of her tables, everyone got food except an 11-year-old boy.

She said when she asked if something was wrong with the food, the stepfather, Timothy Wilson II, told her the boy was going to eat dinner at home later. 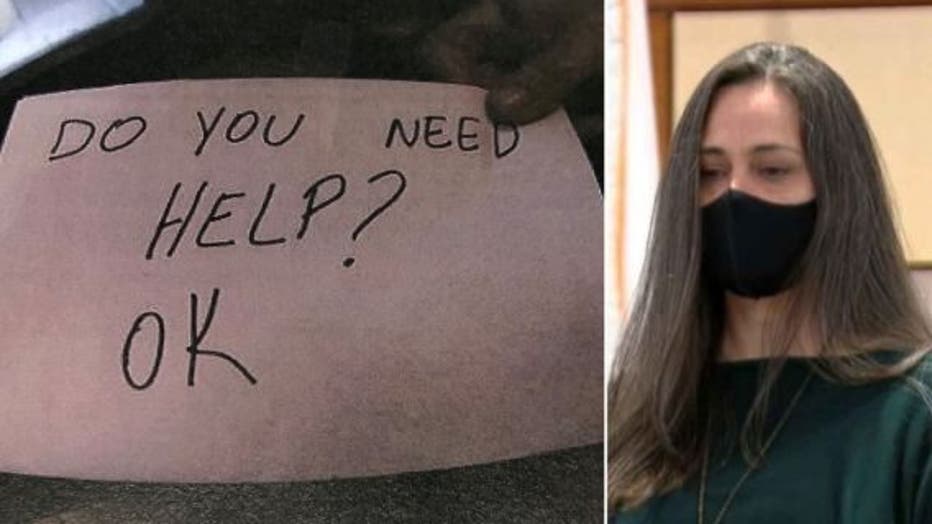 That's when she said she noticed bruises on the boy's face and arms.

"I could see he had a big scratch between his eyebrows," Carvalho said. "Couple of minutes later, I saw a bruise on the side of his eye. So I felt there was something really wrong."

Carvalho used a handwritten sign to get the boy's attention.

She said she wrote, "Do you need help? Ok" and stood behind his parents where they couldn't see. After several attempts, Carvalho said that he signaled yes. Police were immediately called.

Detectives also interviewed the child's mother, Kristen Swann, who reportedly admitted to knowing about the abuse and failed to seek medical care for her son. She was arrested and charged with two counts of Child Neglect.

The boy was taken to get medical attention -- that's when horrific injuries and details were discovered.

"What this child had gone through, it was torture," police said during a news conference. "Seeing what that 11-year-old had to go through, it shocks your soul."

The couple's 4-year-old child was also removed from the home.  Both children are in the custody of the Florida Department of Children and Families.

The owner of Mrs. Potato praised her employee for her quick-thinking and for saving the boy’s life.

"We are extremely proud. This has to encourage people that if you see something, say something."