Someone is set on spoiling what is expected to be an important day in the political career of former President Donald J. Trump.

LAKE MARY, Fla. - Hours before former President Donald Trump is expected to make a "big announcement" at his Mar-a-Lago estate – potentially about a possible 2024 presidential bid – someone else was seemingly looking to overshadow that announcement.

Flying near Trump's lavish Florida estate on Tuesday was a small plane with a banner that read: "YOU LOST AGAIN DONALD! #DESANTIS2024."

The banner seemingly alludes to the Democrats' better-than-expected showing during the midterm election a week ago in which a number of Trump-endorsed candidates lost their contests. At the same time, Florida Gov. Ron DeSantis dominated over Democratic challenger Charlie Crist in his reelection campaign.

As for who may challenge President Joe Biden in the 2024 presidential election, many have speculated DeSantis as a potential front-runner, though DeSantis has not announced any presidential plans. 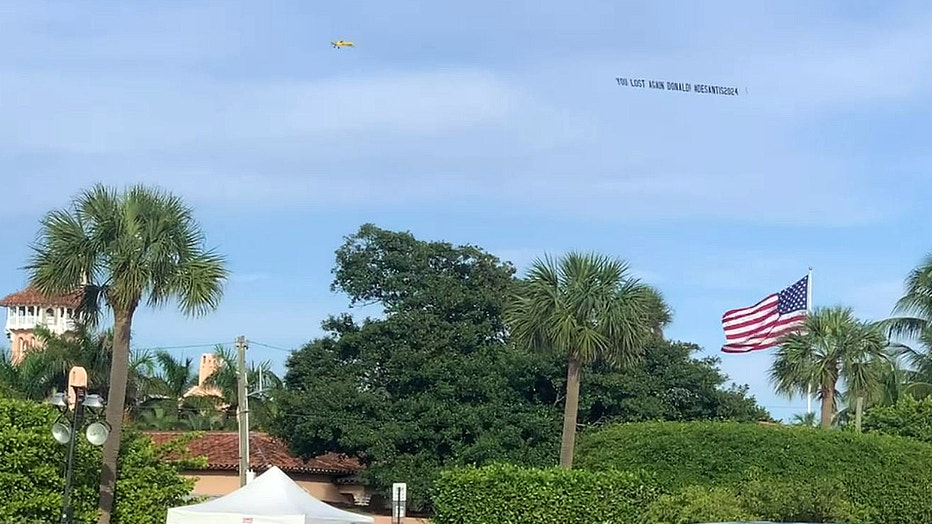 Ahead of the midterm election, Trump made a number of attacks against DeSantis, referring to him as "Ron DeSanctimonious," and reportedly urging him not to challenge him to be the Republican Party's presidential candidate.

Days after DeSantis was elected to serve as governor for a second term, Trump released a lengthy statement about the Florida governor. He went on to take credit for DeSantis’s success, saying that before he joined forces with him in 2017 in his bid for governor, then-Congressman DeSantis was "politically dead." Trump also called him "ungrateful" and an "average governor."

On Tuesday, DeSantis dismissed the comments as "just noise."

"One of the things I've learned in this job is when you're leading, when you're getting things done, you take incoming fire. That's just the nature of it," DeSantis said in response to a question about Trump. "I roll out of bed in the morning, and I have corporate media outlets that have a spasm just because I'm getting up in the morning, and it's just constantly attacking."

"I think what you learn is all of that is just noise, and really what matters is are you leading, are you getting in front of issues, are you delivering results for people, and are you standing up for folks," he continued. "At the end of the day, I would just tell people to go check out the scoreboard from last Tuesday night."

Though congressional districts had been redrawn by DeSantis himself to heavily favor the GOP, the governor and incumbent U.S. Sen. Marco Rubio won their respective races by nearly 20 percentage points.

Still, there had been speculation of a "red wave" sweeping the nation with Republican candidates taking control of the United States Congress during the 2022 midterms by wide margins.  It now appears Democrats are projected to retain control of the Senate with the House still too early to call, though it is widely believed that the GOP may win a thin majority of seats when all the votes are counted.

The Associated Press and Fox News contributed to this report.