Tampa Police Chief Mary O’Connor gives an update about the arrest of a suspect accused of shooting at a homeless family of five as they slept in their car, striking a pregnant woman in the head.

TAMPA, Fla. - The Tampa Police Department has arrested a man they say shot a pregnant woman in the head as she slept in a car with four other members of her family, including three children.

Christopher Stamat Jr., 21, was taken into custody on Saturday and charged with six felonies, including attempted first-degree murder.

According to TPD, the homeless family of five was sleeping in their car on October 5 around 4:30 a.m. near 2200 North Oregon Avenue when the suspect opened fire, striking the woman in the head.

Witnesses said they spotted a dark-colored car leaving the scene and surveillance video captured a black 2-door 300 series 2012 BMW in the area at the time of the shooting.

In addition to obtaining the license tag, detectives say the car they were looking for has unique identifiers such as stickers and black rims. They tracked the vehicle down to a garage at a home on the 3200 block of Marcellus Circle in Tampa. The home belonged to Stamat’s girlfriend.

READ: 2 men with criminal records arrested for trying to kidnap Tarpon Springs teen on her way to school, police say

Investigators got a search warrant for his car and home.  Detectives located an empty gun box for a 9mm handgun in the vehicle and spent shell casings matching the casings found at the crime scene inside Stamat's apartment, which is about three blocks away from where the shooting occurred. 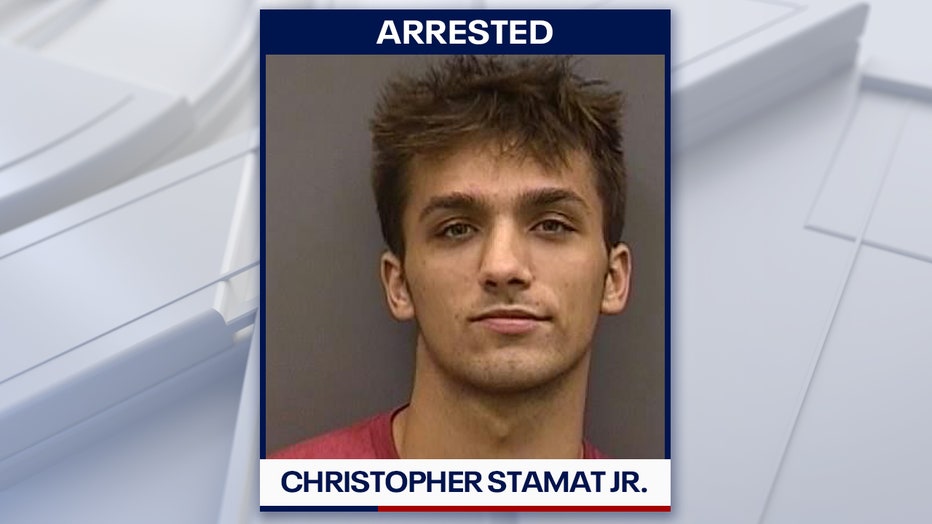 Mugshot of Christopher Stamat courtesy of the Tampa Police Department.

"He actually had a fingerprint ID to get into that bedroom so there’s no doubt that these shell casings belonged to him, " Tampa Police Chief Mary O’Connor shared.

O’Connor said police do not know why Stamat opened fire on the car, but his girlfriend told authorities that he had been exhibiting signs of paranoia lately.

After he was arrested, officers say Stamat told them he felt people were stalking and following him in different vehicles, on bikes and walking.

"He probably thought that there was someone in that car watching him, which makes me feel a little bit better that there isn’t this random gun violence going on around the city. This seems to be pretty specific that he was going to shoot that car," O’Connor said. 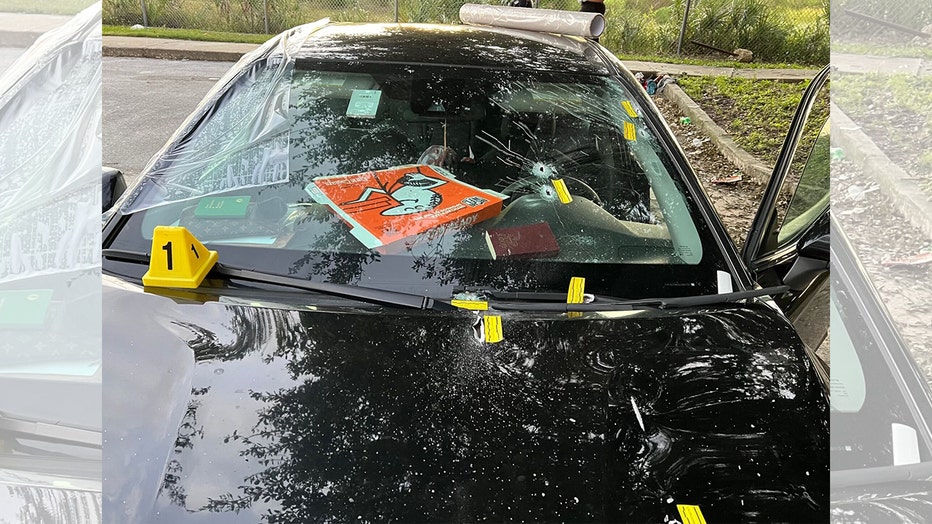 Damage and bullet holes after someone fired shots into this rental vehicle where a family of five was sleeping.

She added, "You take a gun and you unload it on a family it’s just- we can’t really sit back and try to figure out the why behind that there’s really zero tolerance for that kind of behavior."

He has been charged with attempted first-degree murder, shooting into an occupied vehicle and four counts of aggravated assault with a deadly weapon.

READ: Polk County deputy killed in line of duty had dreams of becoming the next sheriff

Stamat is being held without bond.

The pregnant woman who was shot in the head is still in the hospital but is expected to recover. The children who were in the car at the time of the shooting are staying with relatives in a different part of Florida.

O’Connor recommends everyone be aware of their surroundings, especially the homeless community. She also encouraged those experiencing homelessness to take advantage of area resources such as those available at Metropolitan Ministries and the Salvation Army.  She added that TPD and the city of Tampa have homeless liaisons that can help families that are down on their luck.