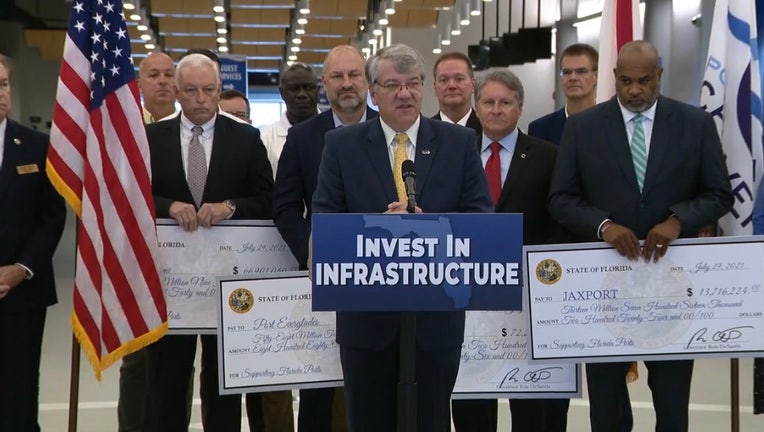 PORT CANAVERAL, Fla. - Federal stimulus money to help the state’s seaports will mostly go to the largest facilities, which each have cruise operations that are just starting to get back on the water during the coronavirus pandemic.

The Florida Department of Transportation on Thursday announced how it will divvy up $250 million that state lawmakers set aside this spring for ports out of money Florida is receiving from the federal American Rescue Plan Act.

"It's been a real financial challenge for Port Canaveral over the last 16 months just to run our operations, support our business lines and maintain a level of readiness for when and how the cruise industry may begin sailing from our port again," Canaveral Port Authority CEO John Murray said Thursday during a news conference at Port Canaveral. "As many of you may or may not know, cruise revenue represents about 80 percent of Port Canaveral's revenue stream."

Some money could go to plans by Port Canaveral to expand its cruise-service capabilities and to accommodate the increasing requirements of the commercial space industry. PortMiami has plans for new cruise terminals and cargo yard improvements.

Among the planned investments over the next five years at Port Everglades are six additional gantry cranes for cargo and widening narrow sections of the Intracoastal Waterway and deepening a navigational channel to accommodate larger ships.

Port Citrus in Citrus County didn’t receive any of the money.

"The American Rescue Plan Act provided guidance for the use of the funds, and distribution amounts were determined using information received from the seaports to help stabilize their operations and enhance infrastructure," Florida Department of Transportation Secretary Kevin Thibault said.

Last year, the Florida Ports Council estimated the pandemic caused the loss of about $23 billion in economic activity tied to ports, affecting some 169,000 port-related jobs.

A report released Tuesday by the Florida Seaport Transportation and Economic Development Council estimated waterborne trade at the state’s seaports fell 16.1 percent last year due to the pandemic, a $14.1 billion hit.

Before the pandemic, Port Canaveral handled nearly 4.9 million cruise passengers a year. That was more than the 4 million who made their way through Port Everglades, but less than the 6.8 million at PortMiami, which is dubbed the Cruise Capital of the World. The industry, however, was shut down in March 2020 after high-profile outbreaks on ships early in the pandemic.