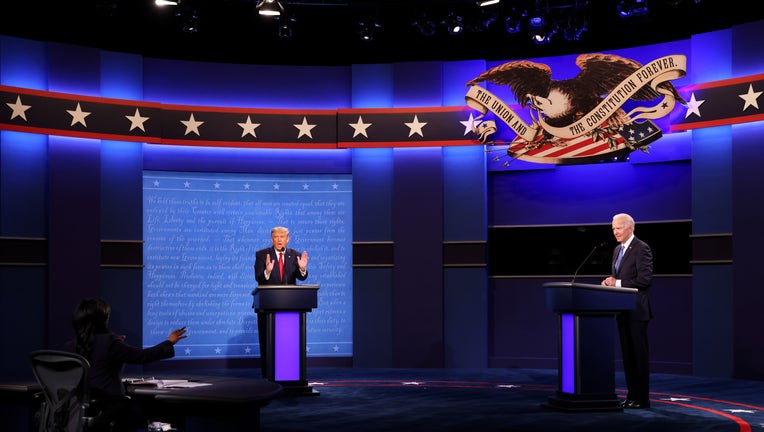 RELATED: How you could win cash watching the final Trump-Biden presidential debate

The two candidates also clashed over a number of issues, from race relations to minimum wage to climate change and the coronavirus pandemic, all while moderator Kristen Welker proceeded over a largely orderly affair between the bitter rivals.

The Hunter Biden debate exchange followed the recent news reports of past communications between Joe Biden's son, Hunter, and his business partners that have raised questions about what Joe Biden knew about these foreign business dealings. Biden's campaign has denied involvement or making money off these dealings, but the president pressed his rival over the reports during the debate.

"All of the emails ... the horrible emails of the kind of money that you were raking in, you and your family. And Joe, you were vice president when some of this was happening. And it should've never happened," Trump said. "I think you owe an explanation to the American people."

Biden responded: "I have not taken a penny from any foreign source ever in my life." Attempting to turn the tables back on Trump, Biden said: "We learned this president paid 50 times the tax in China, has a secret bank account with China. Does business in China."

Trump said that he would release his tax returns "as soon as I can" -- a claim the president has been making without follow-up for years. He further claimed to have "pre-paid" his taxes.

About an hour before the debate, Tony Bobulinski, an old business partner of Hunter Biden delivered an in-person statement claiming he'd worked with the elder Biden. Biden repeatedly in the past denied being involved in the younger Biden's business dealings and continued Thursday to deny it through a statement by campaign spokesman Andrew Bates.

Trump invited Bobulinski to be his special guest at the Thursday debate.

"As Chris Wallace said on the air about this very smear, 'Vice President Biden has actually released his tax returns - unlike President Trump - and there is no indication he ever got any money from anybody in these business deals,'" Bates said. "Joe Biden has never even considered being involved in business with his family, nor in any overseas business whatsoever. He has never held stock in any such business arrangements nor has any family member or any other person ever held stock for him."

The candidates returned to what was the biggest story of the day later in the debate, with Biden calling the accusations against him "a bunch of garbage" and Trump replying, "You mean the laptop is now another Russia, Russia, Russia hoax?"

Also during the debate, the candidates clashed over coronavirus as candidates ridiculed the other's approaches to the pandemic.

"Anybody responsible for that many deaths should not remain president of the United States of America," Biden said.

"We can’t lock ourselves in a basement like he does.. he has this thing about living in a basement," Trump said.

Trump claimed that the U.S. is "rounding the corner" and that the virus is "going away."

Trump also claimed that there will be a vaccine "going to be announced within weeks" thanks to Operation Warp Speed, which is a public-private partnership to manufacture coronavirus vaccines then distribute them once they are approved by the Food and Drug Administration (FDA). Trump specifically mentioned Johnson & Johnson, Moderna, Pfizer as companies whose vaccines have shown promise.

Biden added that under his administration he would "make sure we have everyone encouraged to wear a mask all the time... national standards... to open up schools, open up businesses."

He also ridiculed Trump for his push to quickly open up the country.

"'All you teachers out there, not that many of you are going to die, so don't worry about it,'" Biden said, portraying that as Trump's attitude on the pandemic. "Come on."

The debate involved far fewer interruptions compared to the first debate -- potentially the result of a new rule requiring candidates' mics to be muted during their opponent's two-minute uninterrupted answer and the harsh criticism Trump received for his many interruptions in the first debate.

But things got more contentious later on, especially in exchanges over immigration and minimum wage.

"Parents ... kids were ripped from their arms and they were separated ... those kids are alone, nowhere to go," Biden said of the family separation policy that was highly controversial under Trump. "It's criminal."

Trump replied by pointing out that the infrastructure for many of the controversies on the border in the past four years was carried over from the Obama-Biden administration. "Who built the cages, Joe?" Trump said.

Later, Trump criticized Biden for the "catch and release" policy of letting illegal immigrants walk free ahead of their court dates for illegally entering the country. Biden said that those immigrants largely showed up for their court dates, whic Trump disputed.

"Those with the lowest IQ, they might come back," Trump said.

"You have 525 kids not knowing where in God's name they're going to be and lost their parents," Biden replied, bringing up the family separation policy again. "Good," Trump replied before Welker moved on to another topic.

On minimum wage, Welker asked Biden about whether raising the minimum wage to $15 per hour would add hardship to small businesses, many of which have been hit hard by the coronavirus pandemic. Biden appeared to not understand the question and advocated federal money for small businesses.

"We're going to have to bail them out too," Biden said. "We should be bailing them out now, these small businesses, We've got 1 in 6 of them going under. They're not going to be able to make it back."

"No one should work two jobs, one job, be below poverty," Biden said. "They deserve a minimum wage of $15. Anything below that puts you below the poverty level. And there is no evidence that when you raise the minimum wage businesses go out of business."

Overall, Trump's closing message reflected his 2016 closing message -- that he is an anti-politician and Biden has spent too long in Washington, D.C. and has not accomplished his policy goals. Biden, meanwhile pitched unity, claiming he would be a uniter.

"I'm running as a proud Democrat but I'm going to be an American president I don't see red states and blue states. What I see is American United States," Biden said during an exchange about funding state governments.

The final presidential debate came as controversy swirls around both candidates and the Commission on Presidential Debates (CPD) itself, and during one of the busiest times in politics in at least recent American history.

The Senate is in the middle of a Supreme Court confirmation. Congress and the White House are negotiating a coronavirus stimulus bill that is looking increasingly unlikely to come before the presidential election. Racial tensions, after a summer of protests and sometimes riots, are simmering just below the surface (this was a planned topic at the debate).

Mail-in voting may delay the result of the presidential election and has spurred on a flood of lawsuits. Trump, citing concerns about mail-in voting, has hemmed and hawed on whether or not he would accept the result of the election, leading to speculation about a peaceful transfer of power. Russia and Iran are trying to interfere with the election, according to Director of National Intelligence John Ratcliffe, and have obtained some of Americans' voter registration information.