Trump supporters tun out at State Capitol on Inauguration Day

After preparation for potentially large-scale protests, only about 10 supporters of President Donald Trump waved signs to motorists outside Florida’s Capitol on Wednesday as President Joe Biden was sworn into office in Washington, D.C.

TALLAHASSEE, Fla. - It’s been a quiet week in Tallahassee but a small group of protesters did show up just as the inauguration got underway in Washington D.C.

Shortly after noon, when Joe Biden officially became the 46th President of the United States of America, FOX 35 reporter Robert Guadarrama spotted about a dozen pro-Trump supporters outside the Capitol.

"All peace, at this time," he wrote on Twitter.

Some of the supporters said that Trump actually won the election. 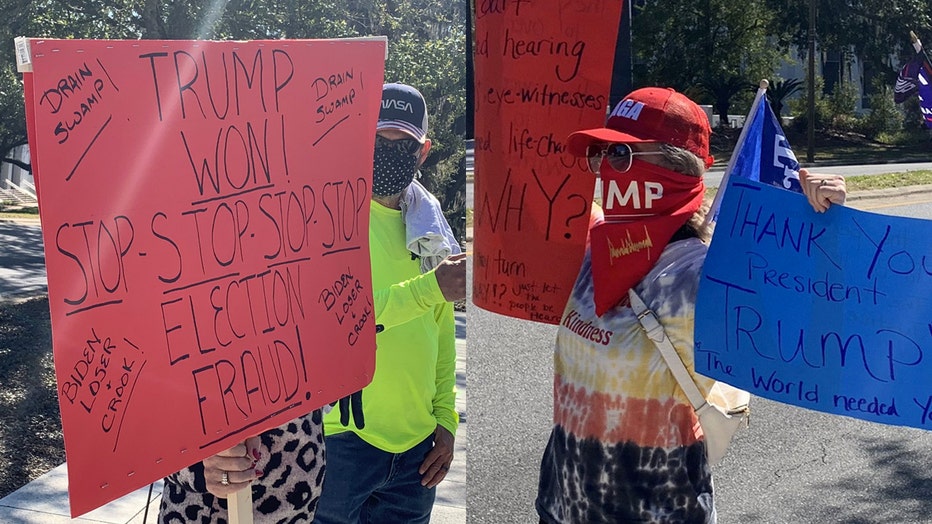 "It’s a sad day," said Suzie Austin, a protester. She and her husband drove to Tallahassee from Jacksonville to protest Joe Biden’s inauguration. "My husband and I were just very upset with the way the 2020 election was handled."

The couple is shocked they were only joined by a few others at the Capitol.

Tallahassee prepared for potentially violent protests, following the FBI alert after the chaos at the U.S. Capitol.

Eventually, one counter-protester showed up. Len Murray from Fort Lauderdale said he drove up to spread his message of unity.

He too was surprised by the turnout. He believes the chaos in D.C. discouraged people.

"It must have had some impact because there’s not much of a turnout," said Murray.

As a precaution, the Florida National Guard will remain activated until the 24th of January.

Tallahassee Mayor John Dailey said he is relieved it has been a peaceful week.

"We are very fortunate that we have not had any events, in fact, it is a beautiful day in Tallahassee, as it has been all week, having said that, we will remain vigilant throughout the evening and as long as we need to," said John Dailey, Mayor of Tallahassee.

City and County buildings will reopen Thursday. Lawmakers and staff are expected to return to their Capitol offices.