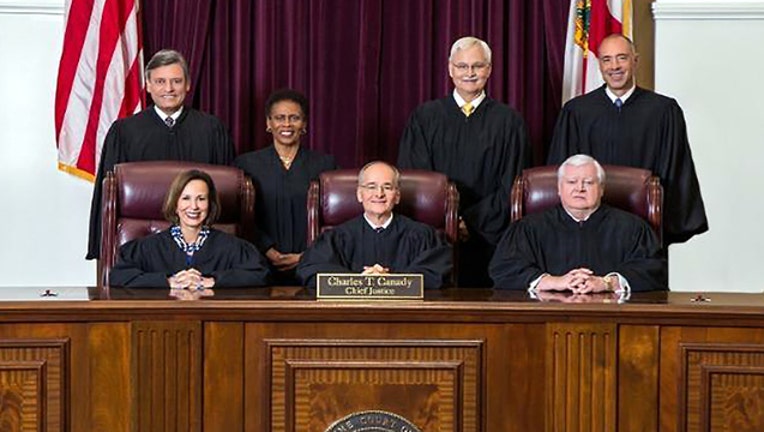 TALLAHASSEE, Fla. (NSF) - In a case that could alter the future of Florida’s highest court, Gov. Rick Scott on Wednesday reasserted his right to appoint three new justices to the state Supreme Court before he leaves office in January.

Responding to a lawsuit asking the Florida Supreme Court to intervene, Scott’s lawyers said the governor retains the power to select replacements for justices Barbara Pariente, R. Fred Lewis and Peggy Quince, who are all leaving the court in early January because they have reached the mandatory retirement age.

The lawsuit, filed by the League of Women Voters of Florida and Common Cause, has asked the Supreme Court to block Scott’s action, through a procedure known as a “writ of quo warranto,” arguing the new governor who takes office on Jan. 8 should have that appointment power.

But in the 33-page response filed late Wednesday, Scott's lawyers said he is following the precedent of beginning the appointment process before the vacancies actually occur, noting numerous justices have been appointed using this procedure in order to avoid prolonged vacancies on the court.

“The petitioners’ interpretation of the applicable constitutional provision is contrary to its plain language, the longstanding historical practice of the judicial nominating commissions for the Supreme Court and district courts of appeal, and the clearly articulated public policy underlying Article V of the Florida Constitution: avoiding extended vacancies in judicial office,” the lawyers wrote.

Earlier this month, Scott directed the Supreme Court Judicial Nominating Commission to begin accepting and reviewing applications for the court appointments. The commission has set an Oct. 8 deadline for the applications, followed by a Nov. 8 deadline --- two days after the general election --- for submitting names of potential justices to the governor.

Scott, a Republican who is running against incumbent U.S. Sen. Bill Nelson, has pledged to work with the winner of the Nov. 6 gubernatorial contest between Democrat Andrew Gillum and Republican Ron DeSantis to interview the candidates advanced by the nominating commission. Scott said he has the “expectation” that he and the incoming governor could reach an agreement on the appointments.

But, should the Democrat emerge victorious, the likelihood of an agreement between Scott and Gillum, who has claimed the right to make the appointments, is slim.

Underscoring the legal challenge is the fact that the new appointments are likely to reshape the seven-member Supreme Court for years, if not decades. Pariente, Lewis and Quince are part of a liberal bloc, which now holds a slim 4-3 majority, that has thwarted Scott and the Republican-dominated Legislature on numerous occasions since the governor took office in 2011.

In moving ahead with the appointment process, Scott cited a prior advisory opinion from the court that said the process should “be conducted in such a way as to avoid or at least minimize the time that vacancies exist.”

“Consistent with this admonition, for the past four decades the Supreme Court has invariably completed its nominating process before the occurrence of a physical vacancy in judicial office due to mandatory retirement from this court,” the response said.

The petitioners’ arguments “amount to a claim that three current justices on this court, at least six former justices, and an untold number of judges on the district courts of appeal were nominated by their respective judicial nominating commissions in an unconstitutional manner,” Scott’s lawyers went on.

Addressing another argument in the lawsuit, Scott’s response rejected the claim that the three retiring justices’ terms actually do not end until the end of Jan. 8, the day of the inauguration of the new governor.

The voting-rights groups assert that Scott’s term will end shortly after midnight on Jan. 7, when the new governor will take the oath of office. Because of that, Scott does not have the power to appoint the new justices, the plaintiffs’ lawyers argued.

But Scott’s lawyers maintain that, “under the plain language of the Florida Constitution,” the three justices’ terms “will conclude no later than the end of the day on Monday, Jan. 7, 2019.”

Scott’s response also challenges the use of the “writ of quo warranto” procedure, arguing the petitioners have not shown the governor is “improperly” using his power in moving forward on the appointments.

“Both the governor and the Supreme Court JNC have acted within their established authority consistent with longstanding practice in initiating the nominating process to avoid extended vacancies in judicial office,” the governor’s lawyers wrote.

A similar lawsuit was filed by the same groups last year, but it was dismissed by the Supreme Court in December, when a majority of the justices said it was premature to rule on the issue.

John Tupps, a spokesman for Scott, said Wednesday the new lawsuit is asking the court to reject “40 years of bi-partisan precedent and there would be three extended vacancies” on the court.

“This is bad for Florida, and the liberal groups that have brought this lawsuit have given no rationale to go outside of the established JNC process, except for political reasons,” Tupps said.

He also said Scott’s pledge to work with the incoming governor on making the appointments is following the same procedure that occurred when Gov. Lawton Chiles, a Democrat, and Republican Jeb Bush agreed on the appointment of Justice Quince to the court in 1998, as Chiles was leaving office and Bush was getting ready to begin his first term in January 1999.