ORLANDO, Fla. - The National Hurricane Center (NHC) said that a system in the Gulf of Mexico has developed into a "Potential Tropical Cyclone."

NHC forecasters said that the system, which is poorly organized but moving toward the north near 9 mph with maximum sustained winds near 30 mph, could strengthen some more on Thursday night and Friday. It will approach the north-central Gulf Coast on late Friday or Saturday.

They said that the potential tropical cyclone could become a subtropical or tropical depression or storm on Friday. It has a 90 percent chance of formation. If it becomes a named storm, it will be called ‘Claudette.’

Nonetheless, they said that this system will bring heavy rainfall and flooding to the northern Gulf Coast. A Tropical Storm Warning has been issued for the Gulf Coast from Intracoastal City, Louisiana, to the Alabama/Florida border,  including Lake Pontchartrain, Lake Maurepas, and Metropolitan New Orleans. 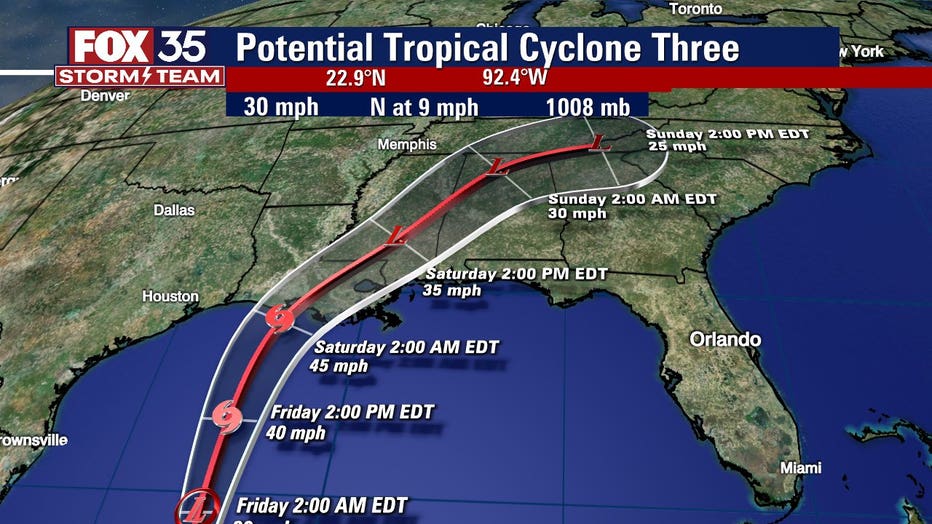 FOX 35 Storm Team Chief Meteorologist Jayme King said that it is likely to make landfall in Louisiana early on Saturday as a tropical storm. The main concerns for severe weather are flooding, possible tornadoes, and damaging winds.

People along the Gulf Coast are already preparing. For example, coast guard members have been mobilized in Austin, Texas. Trucks and boats are on standby in case search and rescue teams are needed.

As for Florida, the system is not expected to affect the Sunshine State very much.

The National Oceanic and Atmospheric Administration (NOAA) predicted that the U.S. is likely to be hit with another "above-normal" year, with 13 to 20 total named storms.  Hurricane season runs through November 30.