Florida wildlife officials say visitors from California tied a rope around an alligators neck and caused the gator to be put down.

COCOA, Fla - The Florida Fish and Wildlife Commission (FWC) says three vacationers decided to tie a rope around a Brevard County alligator, and it led to an unfortunate and dangerous situation.

FWC says the trio was vacationing from California - the oldest was 16, the others were eight and six years old. They say the teenager made a lasso from nylon rope and looped it around the head of an alligator in Fay Lake Park.

Brevard County Fire Chief Mark Schollmeyer was there when it happened. 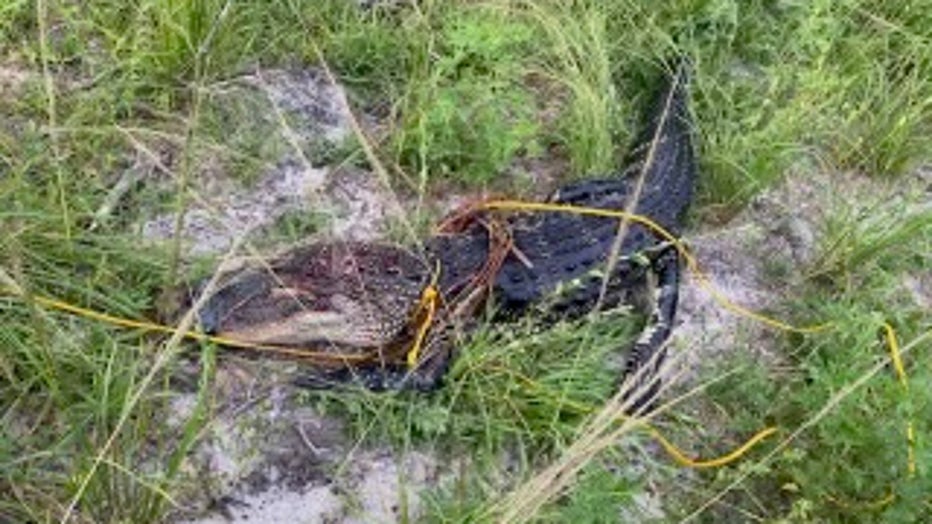 "When the deputies pulled up, the kid looked at them and dropped the rope like he wasn't doing anything. The alligator swam off with a 20-30 foot length of yellow polypropylene rope behind it, which in my mind was a snag hazard or would eventually choke the alligator," he said.

FWC brought in a trapper to help. Schollmeyer says they managed to catch the alligator but had to put it down.

"It's part of nature, part of living in Florida. Every lake has an alligator in it. It became a nuisance alligator once they started messing with it, plus the size, so they euthanized it. No fault of the animal. It was just some kids that made a bad decision," he said.

Trapper Isaac Rempe, from Affordable Wildlife Removal, says it's never a good idea to mess with a gator.

"We should not be interacting with these animals at all, especially in that aspect with these types of animals. It's extremely dangerous and shows very poor taste as well," Rempe said.

RELATED: Only in Florida: Alligator hitches ride in back of patrol car

Rempe says once the teen had tied the rope around the alligator, the reptile had to be put down.

"Had they released that animal, it very likely could have retained that mentality and could have definitely been upset with humans in the future because of it," he said.

FWC cited the teen for putting the rope around the alligator.

FWC says the teen could have been charged with a third-degree felony.