The 2021 Florida Python Challenge kicks off next month

Governor Ron DeSantis spoke from the Everglades about the event, which begins on July 9 and runs through July 18.

The governor spoke from the Everglades about the event, which begins on July 9 and runs through July 18.

"The intent of the Florida Python Challenge is to raise public awareness about Burmese pythons in Florida and how this invasive species is a threat to the Everglades ecosystem, including native wildlife," the event website says. "Through the Florida Python Challenge, knowledge will be shared about Burmese pythons in Florida and the threats they pose, encouragement given for continued removal of these invasive snakes by the public, and highlights provided on the importance of responsible pet ownership so nonnative species such as Burmese pythons are not released into the wild."

The entry fee is $25. While participants don't need to have a hunting license, there is a required online training course you must pass before being allowed to participate. Prizes up to $2,500 will be awarded by the Fish & Wildlife Foundation of Florida. 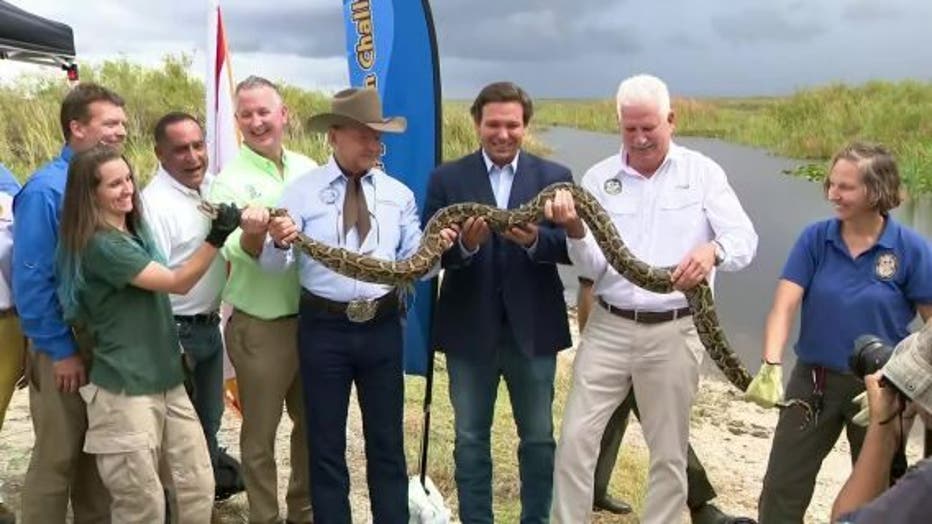 The pythons, which can grow to 20 feet and 200 pounds, are descended from pets released starting five decades ago. The big serpents are overrunning the Everglades and have been devouring native mammal and bird populations.

Each adult female lays between 60 and 100 eggs per year. Once the snakes reach adulthood in about five years they have no Florida predators besides armed humans and the occasional sawgrass death match with an adult alligator.