While Texas may have led the nation for total lightning strikes recorded in 2022, the Sunshine State is the clear winner when it comes to lightning strikes per square mile and one Florida community holds the new title of "lightning capital" of the United States.

Last year brought not only hundreds of millions of lightning strikes across the U.S., but a violent volcanic eruption in January triggered the most extreme concentration of lightning ever detected, according to Vaisala's annual lightning report.

And in mid-January, those instruments were as busy as they've ever been when the Hunga Tonga-Hunga Ha’apai Volcano exploded to life in Oceania.

A large eruption that spanned Jan. 13-14 created around 200,000 lightning events – an unprecedented amount for such a short-period eruption," the Vaisala report stated.

Yet it was only a precursor to the Earth-shaking event that would occur the next day when a cataclysmic eruption sent shock waves and a tsunami around the world. During Tonga's volcanic eruption, sensors detected 400,000 lightning strikes over a six-hour period including more than 25,500 lightning strikes in just 5 minutes.

During the peak of the eruption, half of all global lightning was concentrated in the volcano's crater, becoming the greatest concentration of lightning strikes ever recorded, according to Vaisala.

Texas once again was the state with the most lightning strikes recorded at just under 27.7 million strikes – a consistent top ranking due to its size and prime geographic location for frequent and severe thunderstorms. But it's a big drop from 2021 when the state was hit with 41 million strikes.

Texas was among 21 other states that experienced a below-average lightning count in 2021; many of those states are also in the Midwest, where drought conditions persist. The lack of thunderstorms was a main factor in record-low levels of the Mississippi River in 2022.

The list of the top four states that received the most lightning strikes in 2022 was unchanged from the previous year, with Florida (18.7 million), Louisiana (11.6 million), and Oklahoma (11.4 million) holding firm. Mississippi moved into 5th place with just under 10 million lightning strikes.

A Central Florida rowing team is getting a much-needed donation after two boys were killed by a lightning strike on Lake Fairview in September.

Those previous rankings are weighted by geography – the larger the state, the more real estate to host thunderstorms.

If we track lightning by density and convert from square kilometers to square miles, Florida becomes the clear winner with 285 lightning strikes per square mile in 2022 and the report deems the Four Corners area to be the "lightning capital" of the United States, where Lake, Orange, Osceola, and Polk counties meet. 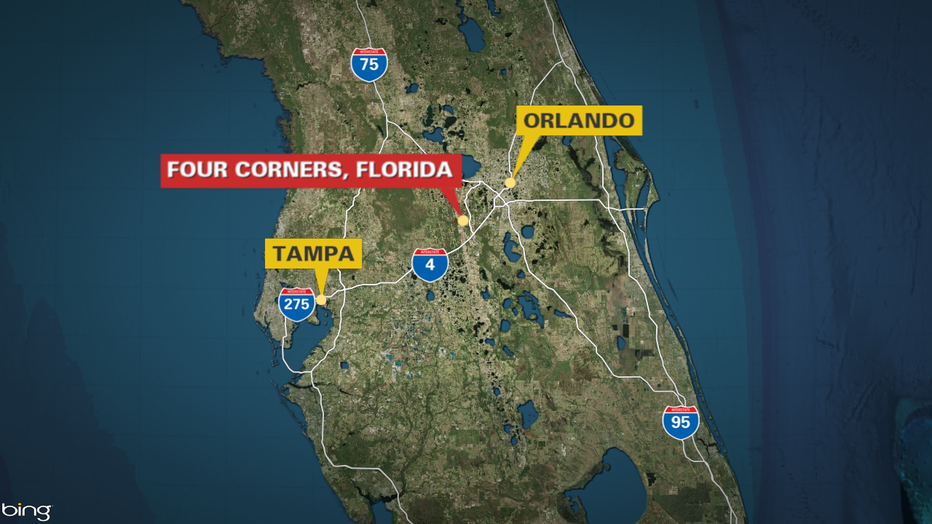 "The Four Corners community, located right next to Walt Disney World, had the most lightning of any Florida community in 2022. It averaged five times the lightning density of what is considered average in Florida," said FOX 35 Meteorologist Brooks Garner. "Because the Sunshine State claims status as the highest lightning density for any state in the U.S., Four Corners becomes the undisputed ‘lightning capital’ of North America."

In 2021 this title was given to Geneva, Florida, in Seminole County. The I-4 corridor between Orlando and Tampa averages the highest strike density in any given year compared to any other region of the U.S., due to its proximity to the daily afternoon summer sea breeze thunderstorm. "So often the title moves from one town to another within this vicinity," Garner added. 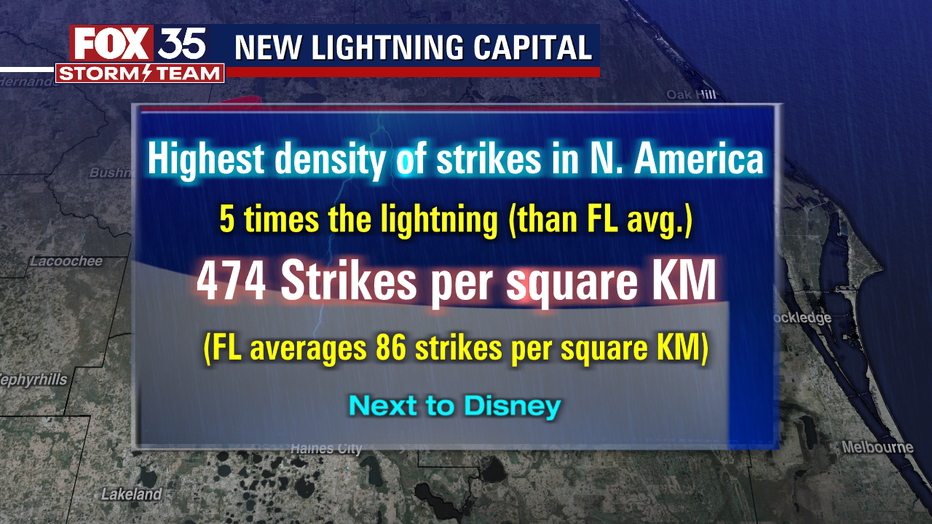 On the other hand, the Pacific Coastal states took up the bottom spots, only interrupted by Maine at No. 48. Unlike the warm waters of the Gulf of Mexico and the Atlantic Ocean that fuel thunderstorms much of the year, the Pacific Ocean is considerably cooler along the West Coast, tempering the large difference in temperatures needed to trigger thunderstorms.

Vaisala also compiled which city was the "lightning capital" of each state for 2022. Nationally, the area of Four Corners, Florida – situated about two miles west of Disney's Animal Kingdom resort -- had the greatest lightning density of any neighborhood, registering over 1,200 lightning strikes per square mile!

Lightning happens on every day of the year, but spring and summer are their most common dates, as you might expect being in the heart of severe weather season.

But it doesn't have to be a warm, muggy day for a lot of lightning.

Vagasky found there were around 1,100 lightning strikes during the nearly four-day-long thundersnow/blizzard event that hit the eastern Great Lakes area in the week before Thanksgiving.

Closer to Buffalo, where 80 inches of snow fell in the south part of town, Vaisala measured 184 lightning strikes within 28 hours at a wind farm near town – about as many as the previous 10.5 months combined.

Vagasky says Vaisala will continue to monitor for lightning to help keep people and property safe.

"Thunderstorms are life-threatening. Lightning can start wildfires, cause power outages, and damage infrastructure," Vagasky said in concluding the study. "Monitoring lightning in real-time and analyzing long-term trends is essential for protecting life and property and understanding changes to our climate."

GET UPDATES ON THIS STORY AT FOXWEATHER.COM.