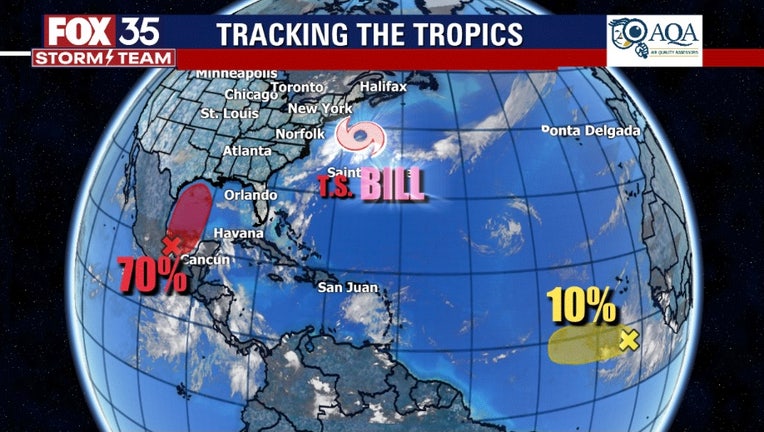 ORLANDO, Fla. - Our second named storm of the 2021 Atlantic hurricane season is expected to be short-lived.

In an update on Tuesday morning, the National Hurricane Center (NHC) said that the center of Bill is moving rapidly toward the northeast near 38 mph and this general motion is expected to continue through Wednesday. 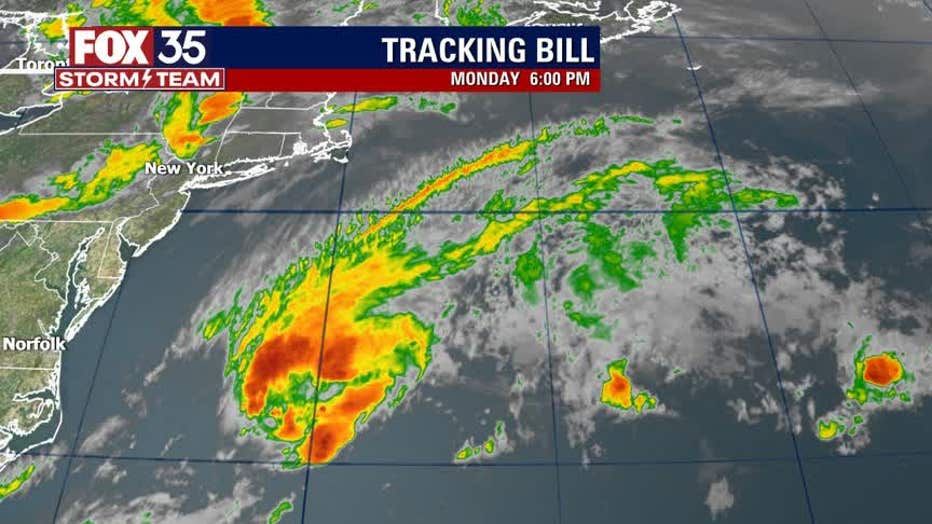 Maximum sustained winds have increased to near 60 mph with higher gusts.

"Little change in strength is expected today, but Bill is forecast tobecome a post-tropical low by this evening and dissipate onWednesday," the NHC said.

The storm is not a threat to land, forecasters said.

Meanwhile, the FOX 35 Storm Team is keeping tabs on two other disturbances.

A tropical wave located several hundred miles south of the Cabo Verde Islands is producing a large area of cloudiness and disorganized showers, but have since decreased.

Any development of this system should be slow to occur during the next few days. Thereafter, a combination of dry air aloft and strong upper-level winds will limit chances of formation while the wave moves over the central tropical Atlantic.

RELATED: ‘Space hurricane’ discovered above Earth for the first time ever

Chances of further development remain low at 10-percent over the next 5 days, according to the NHC.

DEVELOPING AREA OF SHOWERS AND STORMS

Disorganized showers and thunderstorms continue over the Bay of Campeche in association with a broad low pressure area. Forecasters are giving the system a 70-percent chance of developing over the next 5 days.

Gradual development of this disturbance is possible during the next couple of days while it meanders near the coast of Mexico.  The system should begin to move northward by midweek, and a tropical depression is likely to form late in the week when the low moves across the central or northwestern Gulf of Mexico.

Regardless of development, heavy rainfall is possible over portions of Central America and southern Mexico during the next several days.  Heavy rains could also begin to impact portions of the northern Gulf Coast on Friday.

The agency predicted that six to 10 of those storms were likely to become hurricanes, with wind speeds of 74 mph or higher.

According to NOAA data collected from 1851 through last year, 40% of all U.S. hurricanes hit the state of Florida and 88% of major hurricane strikes have hit either Florida or Texas.