FOX 35 Storm Team Meteorologist Brooks Garner has the latest tropical activity in the Atlantic Ocean and the Gulf of Mexico.

ORLANDO, Fla. - Our second named storm of the 2022 Atlantic hurricane season could form as early as Thursday, the National Hurricane Center (NHC) said.

There are three disturbances being watched across the tropical Atlantic and Gulf of Mexico. The first, Potential Tropical System #2, is moving over the southwestern Caribbean Sea with maximum sustained winds of 40 mph.

Forecasters say the system is expected to become Tropical Storm Bonnie on Thursday.

"Conditions appear conducive for development, and the disturbance is expected become a tropical storm while slowing down over the southwestern Caribbean Sea," the NHC said Thursday morning. 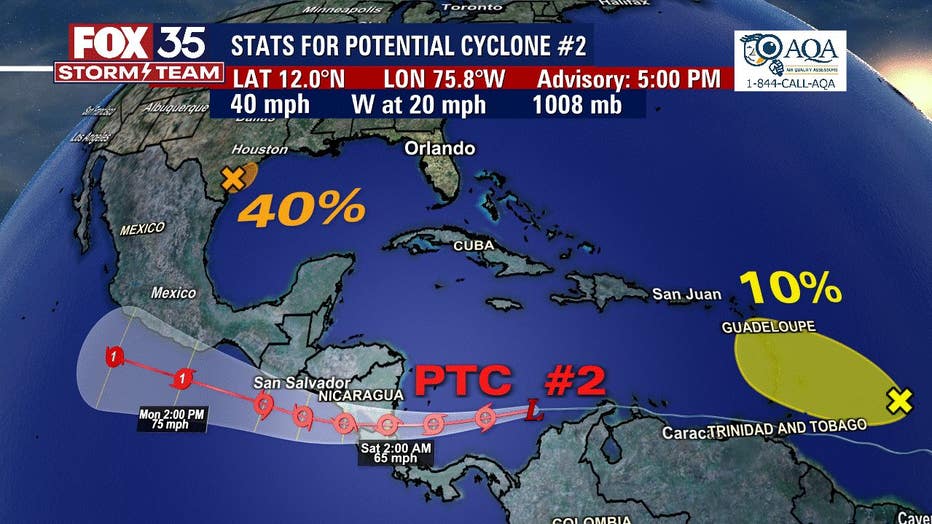 FOX 35 Storm Team Chief Meteorologist Jayme King said the system could possibly strengthen into a Category 1 hurricane as it makes its way across northern Costa Rica and into the Pacific Ocean.

The system is not expected to be any threat to Florida.

The second disturbance being monitored is an area of low pressure in the Gulf of Mexico that will slowly drift westward toward the east coast of Texas over the next few days, bringing heavy rain. This area has a 40% chance for further development.

The third is a tropical wave with an area of disorganized showers and thunderstorms with a 10% formation chance within the next five days.

Depend on the FOX 35 Storm Team this hurricane season.