On the forecast track, Iota will move across the central Caribbean Sea during the next day or so, and approach the coasts of Nicaragua and northeastern Honduras on Monday.

It could wreak havoc in a region where people are still grappling with more than 120 deaths and many more missing in the aftermath of Hurricane Eta.

Maximum sustained winds are near 40 mph with higher gusts. Forecasters says steady to rapid strengthening is likely to begin tonight or Sunday, and Iota is forecast to be at or near major hurricane strength when it approaches Central America.

"Tropical Storm #Iota is now forecast to strengthen to a CAT 2 with peak winds at 110 mph by Monday night," said FOX 35 meteorologist Allison Gargaro. "The waters are very warm in the Caribbean."

Iota is the 30th named storm of the season, breaking the record for the most named storms in a hurricane season. 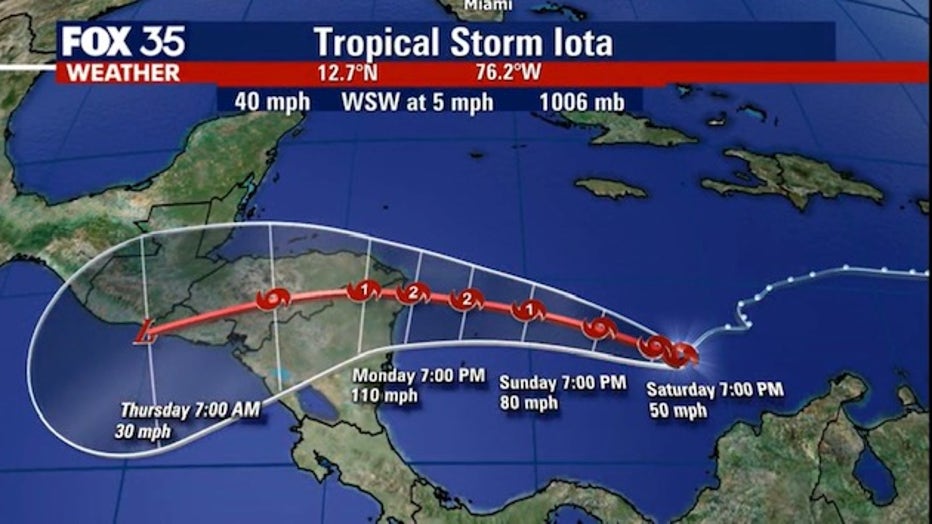 The former Tropical Storm Eta was classified as a post-tropical cyclone early Friday, racing off the Southeast Atlantic coast and bringing heavy rains and gusty winds to the Carolinas after moving across north Florida.

One death in Florida was linked to the storm, along with some scattered flooding.

Watch FOX 35 News for the latest on the tropics.