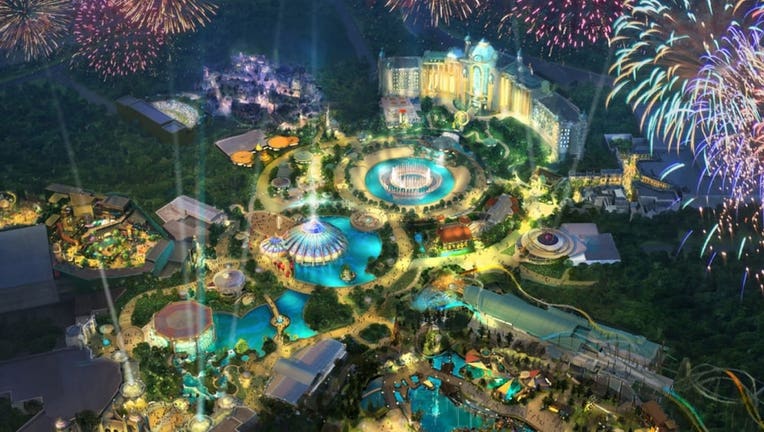 ORLANDO, Fla. - Universal Orlando has re-started construction on its new theme park, but it’s going to be a while before it’s open to the public, according to reports.

Earlier this week, the resort announced that construction on its new Epic Universe park in Orlando, Florida, will begin again after an almost year-long pause because of the coronavirus pandemic.

As a result of the delay, Epic Universe’s opening will reportedly be pushed back another two years.

According to the Orlando Sentinel, Universal told Orange County Mayor Jerry Demings that Epic Universe is now set to open in early 2025. It was previously supposed to open in 2023.

Universal did not immediately respond to Fox News’ request for comment on the delayed timeline.

In its announcement on Wednesday, Universal said Epic Universe "will create an entirely new level of theme park entertainment." The 750-acre site is expected to have a new theme park, an entertainment center, hotels, shops and restaurants when it opens, the announcement said.

However, Universal hasn’t said exactly what the park’s rides and attractions will include.

Many have speculated that the park could be similar to the company’s Super Nintendo World in Japan, or that it could be inspired by the company’s Minions brand, CNBC reported.

Construction on Epic Universe had to stop in July 2020 because of the pandemic. According to the announcement, development has restarted this week, but it will take "several months before reaching full-speed."

Universal promised that construction on the new park will bring hundreds of jobs to Universal, thousands of jobs to Central Florida and billions of dollars into the Florida economy.

"The restart of construction of Epic Universe is a terrific moment for our employees and for our theme park business in Florida," Brian L. Roberts, Comcast’s Chairman and CEO said in a statement. "It is our single largest investment in the state and represents our enthusiasm for the spectacular park and the economic opportunities it will generate."