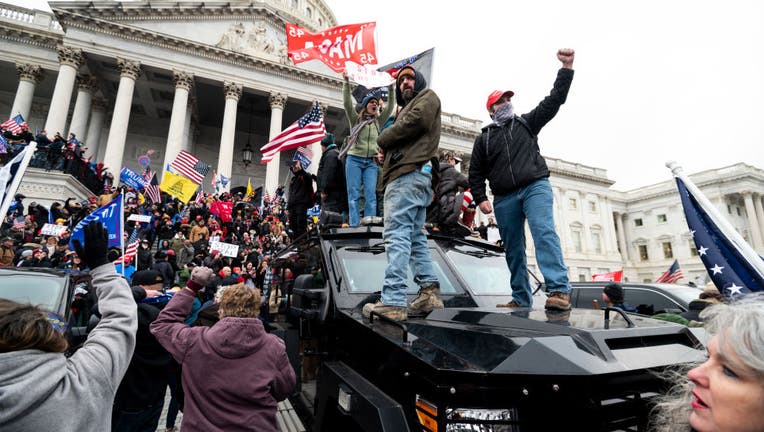 Trump supporters stand on the U.S. Capitol Police armored vehicle as others take over the steps of the Capitol on Wednesday, Jan. 6, 2021, as the Congress works to certify the electoral college votes. (Photo By Bill Clark/CQ-Roll Call, Inc via Getty (Getty)

The officer was identified as Brian Sicknick, a member of the department's First Responder's Unit who joined the force in July 2008.

Sicknick's death will be investigated as a homicide, the Capitol Police said, with the probe handled by Capitol Police, Washington's Metropolitan police, and federal agencies.

Sicknick was on duty at the Capitol when he was injured "while physically engaging with protesters," the statement said. The officer collapsed after the attack and was taken to a local hospital, where he died at 9:30 p.m. Thursday.

A police motorcade was captured on social media Thursday night escorting Sicknick on Constitution Avenue in Washington. Officers were seen lining the front of the Capitol in silence in honor of the officer, reports said.

Members of Congress began sharing their condolences after the announcement of Sicknick's death.

"Heidi and I are lifting up in prayer the family of the U.S. Capitol Police officer who tragically lost his life keeping us safe," Cruz wrote. "He was a true hero. Yesterday's terrorist attack was a horrific assault on our democracy. Every terrorist needs to be fully prosecuted."

Washington D.C. Mayor Muriel Bowser also shared her condolences on Twitter, saying, "May he Rest In Peace, and we work tirelessly to honor his service to the Congress and our nation."

"The officer was one of at least five people who died following the Capitol riots, which saw dozens of people, some armed with guns, roaming the halls of the federal building. The rioters smashed or dismantled property and barged into House and Senate leaders’ chambers, as Hill staffers and lawmakers were under lockdown, or hid behind chairs or under tables.

Benjamin Phillips, 50, of Pennsylvania; Rosanne Boylan, 34, of Georgia; and Kevin Greeson, 55, of Alabama, died after suffering "medical emergencies" related to the breach, law enforcement officials said during a news conference on Thursday.

A fourth person – identified as Air Force veteran Ashli Babbitt of California – was fatally shot by police during the riots.

Michigan Rep. Peter Meijer tweeted that "it didn’t have to be this way."

Our hearts break over the senseless death of a United States Capitol Police Officer Brian Sicknick, who was injured in yesterday’s violent assault on the Capitol. Our prayers are with his family, friends, and colleagues on the force," Rep. Tim Ryan, D-Ohio, and House Appropriations Committee Chairwoman Rosa DeLauro, D-Conn., wrote in a joint statement.

"This tragic loss should remind all of us of the bravery of the law enforcement officers who protected us, our colleagues, Congressional staff, the press corps, and other essential workers yesterday," the statement continued. "To honor Officer Sicknick’s memory, we must ensure that the mob who attacked the People’s House and those who instigated them are held fully accountable."

Washington Post congressional reporter Paul Kane tweeted that Sicknick's passing was: "Just not right. Not at all."

Now five people have died, including Officer Sicknick. There are so many who should feel utterly ashamed, if they were capable," he wrote.